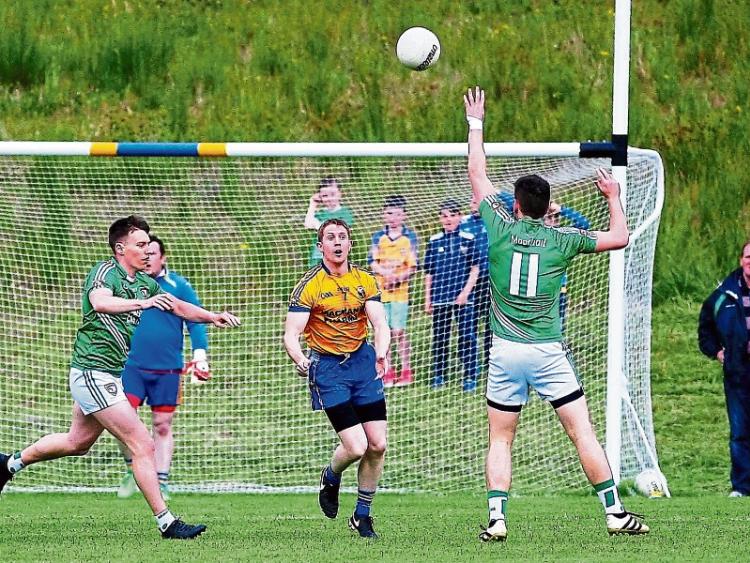 Glencar/Manorhamilton's Brian McDonald plays the ball over Mohill's Domhnaill Flynn and away from Ronan Kennedy during the first ever game at Glencar/Manor's new pitch at Boggaun. Photo James Molloy

Ballinaglera will be playing their League football in Division One next year after a vital victory over Annaduff last weekend.

Ballinaglera now stand with 15 points with two games to play and can only be caught by Leitrim Gaels, who have two games in hand. Annaduff are third with 11 points and could match Glera's points tally if the leaders were to lose their remaining two games, against Leitrim Gaels and Cloone, but Ballinaglera have the head to head advantage and would go up.

Cloone's concession to Leitrim Gaels has proven very costly as it stops them from catching Ballinaglera or having the head to head result in the event of a tie.

Leitrim Gaels, who didn't have a game over the week but have two games in hand, need just three points from their games against Bornacoola, Ballinaglera, Aughavas and St. Mary's and given that the Carrick men have yet to win a game, that looks unlikely.

On the field of play, Drumreilly took local honours with a hard fought 1-12 to 0-13 victory over Carrigallen while Kiltubrid gave their hopes of avoiding the drop a boost with a 1-13 to 0-9 over Drumreilly but they are still in a big battle with Glencar/Manorhamilton and Aughavas below them and even the teams above.

Cloone took local bragging rights with a one point win over Aughavas mid-week but then failed to field against Leitrim Gaels while Glencar/Manor’s second string drew with Annaduff.

Such is the tight nature in the Division that even the teams on eight points are not safe from the drop so Bornacoola, Carrigallen, Sean O’Heslin’s and Drumreilly are still in the relegation battle.