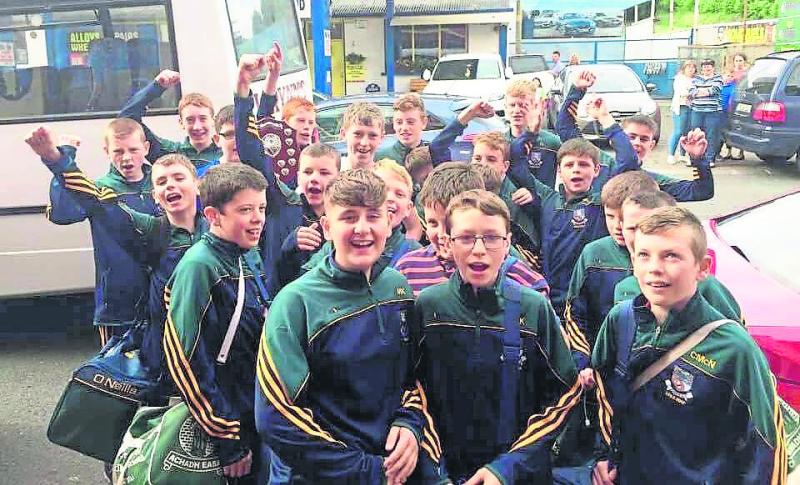 St. Joseph’s of Aughavas and Carrigallen took pride of place for Leitrim in last weekend’s Féile Peil na nOg but it was almost an unprecedented weekend for the county with two other teams reaching Finals of the underage festival.

St. Joseph’s won the Division 9 Shield title while Glencar/Manorhamilton (Division 7 Cup) and St. Mary’s Kiltoghert (Division 7 Shield) both reached finals and Glencar/Manor’s girls and Mohill boys both made it to the quarter-finals of the cup competitions.

St. Joseph's started their Féile Campaign against Oliver Plunketts in Irvinestown, the Louth team winning 2-2 to 0-5. Next up was a trip to Brookeborough to take on the home side. St. Joseph's needed a win and they delivered a 4-9 to 1-6 victory. On Saturday, they played their host club for a place in the Cup Finals. However, the home side were stronger and went through on a scoreline of 1-6 to 0-4.

St. Joseph's went into the Shield and travelled to play the quarter final in Brookeborough on Saturday evening. After a thrilling encounter, they emerged victorious over Roslea of Fermanagh 3-3 to 2-2. This put them through to a semi final against the famed Cornafean club from Cavan, their near neighbours!

This match took place in Lissan on Sunday morning. Another tense battle ensued but the lads held their nerve to record a famous victory on a scoreline of 3-2 to 1-4.

They qualified for the Shield final and it was back into the cars and off to Enniskillen where they would face Naomh Bríd from Cavan. The lads saved their best performance till last to run out winners on a scoreline of 2-3 to 1-1. A great crowd turned out to support them, especially from their host club Irvinestown. Well done to team and management for a wonderful weekend of entertainment - one that all involved will never forget!

Glencar/Manorhamilton and St. Mary’s were drawn in the same group in Division 7 with Glencar/Manor winning the Leitrim honours with a 4-5 to 2-6 victory. That result saw them qualify in second behind Shandonagh with both Leitrim teams accounting for St. Ciaran’s with some ease.

In the Cup, Glencar/Manor defeated Davitt’s in a high scoring encounter, 3-7 to 4-1, before seeing off O’Hanrahan's of Carlow with a bit more ease. Unfortunately, St. Mogues of Fethard proved too strong in the final with a seven point win.

St. Mary’s followed their Leitrim rivals into a final, this time in the shield after they defeated Tempo and Patrick Emmets with some ease. Unfortunately, they fell victim to a real sucker punch when St. Ciaran’s, beaten by the Carrick men by double scores in the group stages, scored a surprise 3-2 to 1-5 victory to take the title.

Mohill were the highest ranked Leitrim team going in and faced stronger opposition in Division 5 but gave a good account of themselves as they defeated Cootehill and Doohamlet before falling to Dicksboro of Kilkenny in their last group game. They then exited the Cup competition with a 0-8 to 0-3 loss to Buttevant in the quarter-finals.

Glencar/Manorhamilton, on the back of their Division 4 victory last year, were competing in Division 3 this year and accounted for Lurgan and Lavey in the group stages, losing only to St. Joseph’s before Tyrone’s Carrickmore proved too strong in the Cup Quarter-Finals.