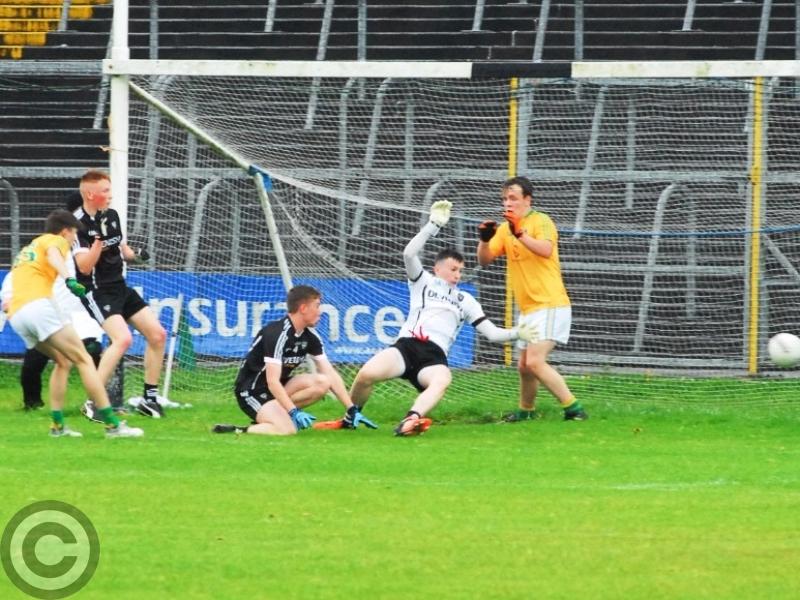 Jordan Reynolds watches as his shot is diverted wide. Photo by Willie Donnellan

Eleven wides for Leitrim to three for Sligo and a host of dropped shots tell what seems like the same old story for  a new generation of Leitrim footballers as the Green & Gold almost upset the odds against a fancied Sligo in the Connacht Minor Championship Semi-Final.

Yet it was probably Leitrim's best Minor championship performance for some years as a team, shorn of up to eight quality players according to manager Martin McGowan, fought like tigers, brought Sligo to the brink of defeat and almost into  a place in the Connacht Minor Final.

Leitrim harried, they hassled and they fought for every ball as if their lives depended on it and they deserve enormous credit for their fearless approach that belied a winless campaign in the Connacht Minor League and a seven point loss to Roscommon in a challenge game  just a week before the game.

But finishing again let the Green & Gold down and it was ironic that two of Leitrim's three goals were directly down to Sligo mistakes and the third saw the ball slip under the diving keeper.

Ultimately, Sligo's superior cutting edge in attack was the difference as the Yeatsmen made the most of their chances in a fascinating battle where Leitrim's bravery may, quite perversely, have been their undoing in the long run.

Martin McGowan revealed that Leitrim were well aware that Sligo would play an extra-man in defence and picked their team accordingly, playing a forward in Mark Diffley at wing-back and pushing Evan Harkin up the field.

That brave approach saw Leitrim pin the Yeats men  in their own half for long periods and dominate possession but it also left them vulnerable so that when Sligo did break out of the Leitrim vice-grip, they were able to exploit acres of space in the Leitrim defence.

All three Sligo goals came from breakouts and strong runs through the heart of the Leitrim defence, centre-back Evan Lavin scoring one particularly devastating goal as he ran unchecked from his own his own half up the centre to strike like a dagger.

It is an interesting dilemma that, admittedly even with the benefit of hindsight, is still hard to figure - had Leitrim not pushed up on Sligo's extra-man, would they have conceded the goals and breakaway points they did?

But if they hadn't pushed up, would Leitrim have created the amount of chances they did? Would they have camped in Sligo half?

The question is immaterial as Sligo's efficiency in front of the posts was not matched by Leitrim. Nor could they match Sligo's surge down the final stretch as the home team hit five unanswered points to seal victory.

It didn't look as if Leitrim's legs had gone, indeed Leitrim's players kept running and working hard, but Sligo  upped the pace in the final ten minutes and Leitrim couldn't match them during that period despite all of the heart and spirt they showed.

One wonders what might have happened had Leitrim had access to those eight players Martin McGowan refers to in the interview on the next page but it was certainly a glorious opportunity for Leitrim to reach their first Connacht Final since 2002.

The Leitrim manager  felt it was a missed opportunity and didn't want praise for a good performance, insisting that Leitrim should have won the game but added that county teams needed more support from clubs, from the media and from the entire county.

McGowan, a supreme advocate for Leitrim football, may have a point about confidence issues but all of Leitrim's best performances down the years, many of which he was at the helm of himself, came on the back of strong, consistent performances leading up to the big games and the acquisition of confidence is  through performance first and foremost.

This Leitrim team showed a lot of potential and  Caleb Duffy, Ruairi Sheridan, Mark Keegan, Aaron Hoare, Oisin McLoughlin and Conor Cullen looked like real prospects for the future in Markievicz Park and will be potentially very good Senior players but unfortunately, it was Sligo who knew  the way to win last Wednesday.

Sligo opened the scoring before Caleb Duffy, who excelled all evening, swept over an equaliser and the Allen Gaels man edged Leitrim in front on seven minutes. But wides were costing Leitrim as Jordan Reynolds saw a glorious goal chance saved by Sligo keeper Alan Davey.

Davey was central in the big turning point in the first half as Leitrim, two points behind, got a gift when Davey stepped back over his own goal-line with the ball after fielding a shot from Jordan Reynolds.

Sligo should have levelled but Man of the Match Conall Ryan blasted wide after breaking through the Leitrim defence. Caleb Duffy scored a third point of the half to stretch Leitrim’s halftime lead to 1-4 to 0-5 after a tense first half.

The second half featured three goals in the first five minutes - Sligo started when Red Og Murphy, soon to be black carded, fired to the net. Leitrim hit back when a Sligo defender gave away possession and Oisin McLoughlin scored from close range but straight from that kickout, Evan Lavin’s 60 yard run ended with a goal.

McLoughlin dragged a goal chance wide but a huge Aaron Hoare point kept Leitrim on track but a disastrous routine from a fifty led to a breakaway equalising point for Sligo.

The game still had more twists and a third Sligo goal seemed curtains when the home team again broke through the Leitrim defence, sub Ryan Walsh goaling but Leitrim weren’t finished as Oisin McLoughlin’s shot squirmed under the keeper and into the net to tie the scores with 12 minutes to go.

Crucially Leitrim hit three wides through Ruairi Sheridan, Aaron Hoare and James Clancy and Sligo seemed to find a new gear in the final 10 minutes with points from Lavin, Luke Towey, Walsh and two from Ryan to seal victory.

Main Man: Caleb Duffy was outstanding, not far behind was Ruairi Sheridan. Mark Keegan, Shaun Chandler, Aaron Hoare, Colm Kiernan, Oisin McLoughlin and Jordan Reynolds all had their moments but Leitrim could have done with poachers like Conall Ryan, Evan Lavin & Ryan Walsh.

Talking Point: Martin McGowan had strong words for clubs, media and supporters after the game but ultimately, it was Leitrim's old age failing of inaccuracy that undid his team.

Turning Point: Evan Lavin's surging run half the length of the field gave Sligo the confidence that they could get the scores once they broke the Leitrim defensive cover.

Ref Watch: Liam Devaney wasn't consistent and made some mystifying calls in favour of both teams but the Mayo official didn't affect the result of this contest.

Highlight: Leitrim's never say die spirit was refreshing and after the talk of absentees, the Green & Gold youngsters showed just what it means to wear a county jersey as they fought like tigers.

Lowlight: Leitrim's shooting left a lot to be desired. Conditions were bad but Leitrim's young guns often took on unfeasible shots from long distance that were high risk in such conditions.

The Leitrim team who was defeated by Sligo. Photo by Willie Donnellan