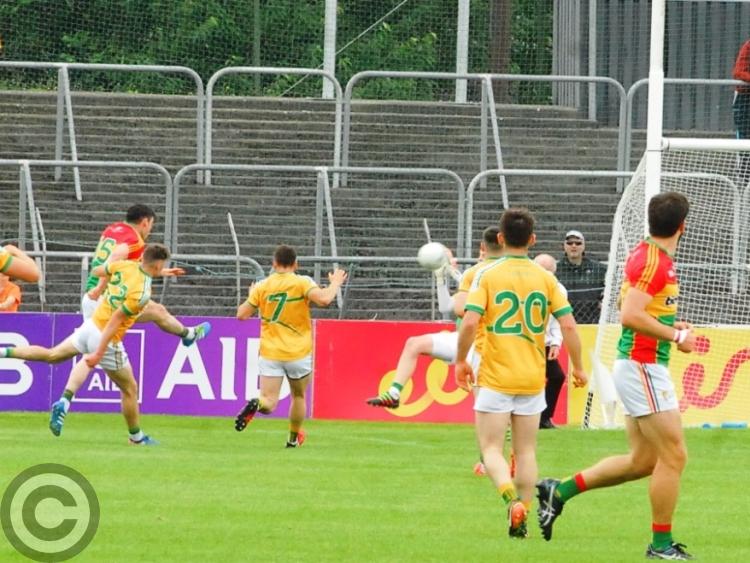 A partially hidden Brendan Flynn makes a save from Carlow's John Murphy. Photo by Willie Donnellan

The scale of the task to make Leitrim a competitive force at inter-county level was laid brutally bare last Saturday as Carlow blew the Green & Gold away in the second half.

Netwatch Cullen Park was the scene of Leitrim’s exit from the championship for this year, a disspiriting end to the inter-county season as Carlow brushed aside a Green & Gold team unable to match the home team’s physical power.

Carlow’s direct running punched holes repeatedly in the Leitrim defence as they turned the ball over time and time again to turn a two point halftime deficit into a comfortable seven point victory, leaving a sizeable  Leitrim support deflated and despondent.

Questions will be asked, of players, of management and of the County Board but what disappoints most was that Leitrim looked in a great position at halftime but when the pressure came on in the second half, the Green & Gold looked stuck to the floor and devoid of energy.

Brendan Guckian’s team were in a very good place at halftime  - Carlow  missed some goal chances in the first half but it was Leitrim who were setting the terms of the engagement, their patient and clever team-work causing the home team no end of problems.

With early low deliveries to Ryan O’Rourke causing havoc in the Carlow defence, Leitrim’s intricate passing and patient support play won frees and created some great scoring opportunities that were capitalised on by the Fenagh man and Brendan Gallagher.

The visitors pushed up on Carlow’s defensive alignment and it paid off as Carlow kept turning over the ball and had a degree of the yips in attack that caused the large home support a fair degree of concern.

Leitrim's defensive structure, which saw Gary Reynolds and Ronan Gallagher, restored to the starting line-up was solid and tackled ferociously and all the ingredients were there.

And you would have thought that Leitrim were in a great position going into the halftime break, a two point lead and a restless support, not yet giving out but perplexed that the team that caused Dublin problems were struggling against a team they were fancied to easily overcome.

Unfortunately, the warning signs of growing Carlow dominance around the middle of the field turned into a full-blown crisis in the second half as the home side started to running straight at the Leitrim defence, punching massive holes in the Leitrim rearguard. 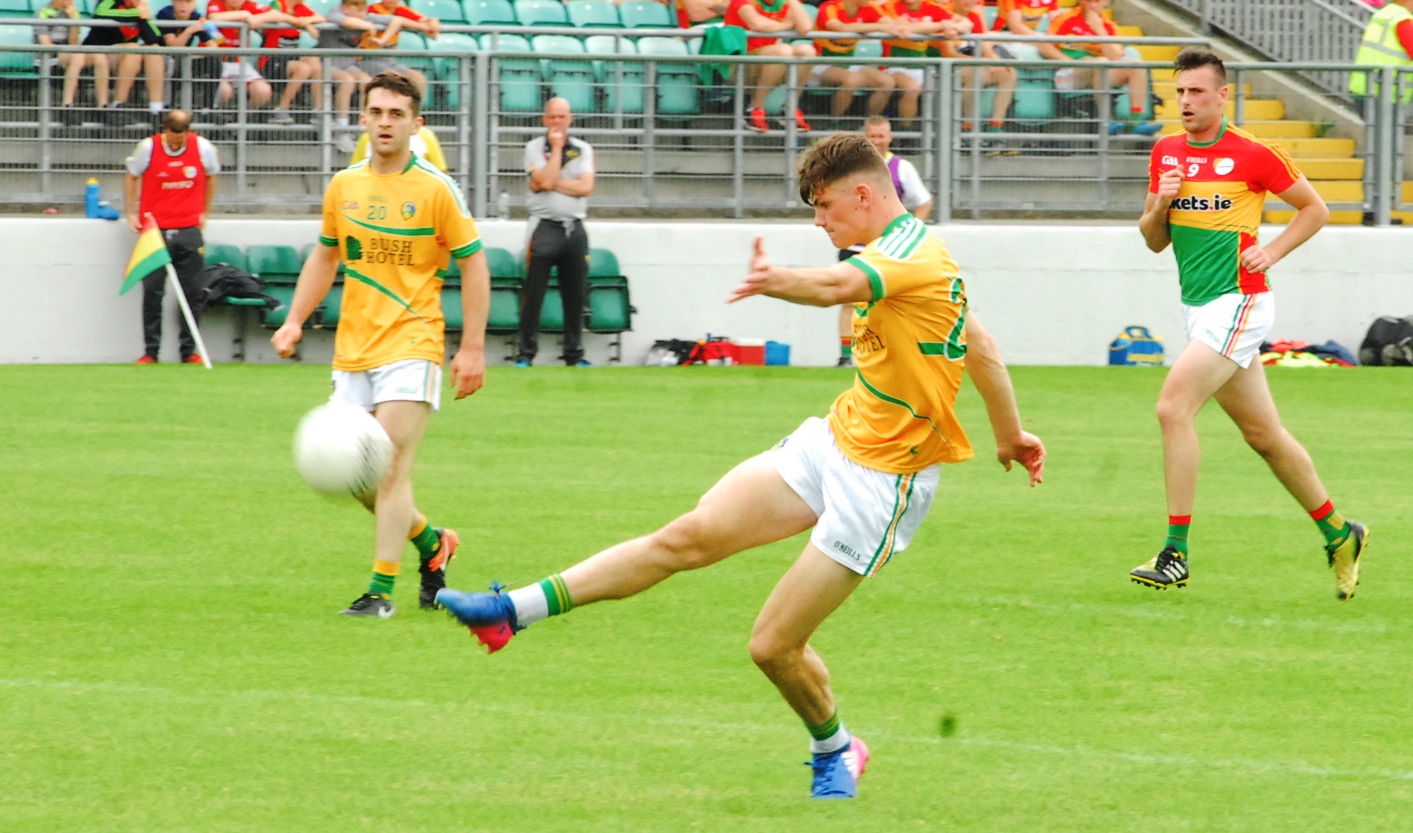 Conor Cullen fires over a first half point for Leitrim. Photo by Willie Donnellan

Leitrim went 20 minutes without a score in the second half and even when two quick fire scores cut the gap to three points, you never got the sense that the Green & Gold would be able to mount a late surge and it was Carlow who again resumed their dominant ways.

With Carlow  winning the ball in the middle of the park and turning it over time and time again as Leitrim tried to build momentum,  there were acres of space for the hard running Sean Murphy and co to exploit and exploit it they did.

Murphy’s surging run led to the first goal as a block on Shane Moran by Murphy saw him charge up the middle and off-load to Paul Broderick and his close range finish turned the game inexorably in Carlow’s favour.

Ironically, Carlow’s change in direction was necessitated by an injury to Broderick who came out the second half with his calf strapped tight. In the first half, Carlow had gone long to an isolated Broderick but little came of it.

The change of a hard running game took the pressure off Broderick and exploited what seemed like a worrying lack of fitness in the Leitrim ranks.

Worrying because you can’t imagine any inter-county team lacking fitness at this stage of the year but when it came to the second half, Leitrim were definitely found wanting as Carlow upped the pace, their big men boasting incredible pace and repeated running power to go with their size and physical strength.

Whether that fade out was physical or mental is a question that needs urgent action but it was quite startling to see Leitrim players trailing disconsolately as Carlow players literally charged through them, bowling them over and leaving them gasping for breath.

But at the back of it, the fact that another Division 4 team, a team Leitrim had already beaten this year, could look so superior when the pressure came on in the second half grates most.

We asked hard questions after the Roscommon game and while the Rossies stock has definitely risen after their win last Sunday, those self same questions are the ones that must be answered urgently. 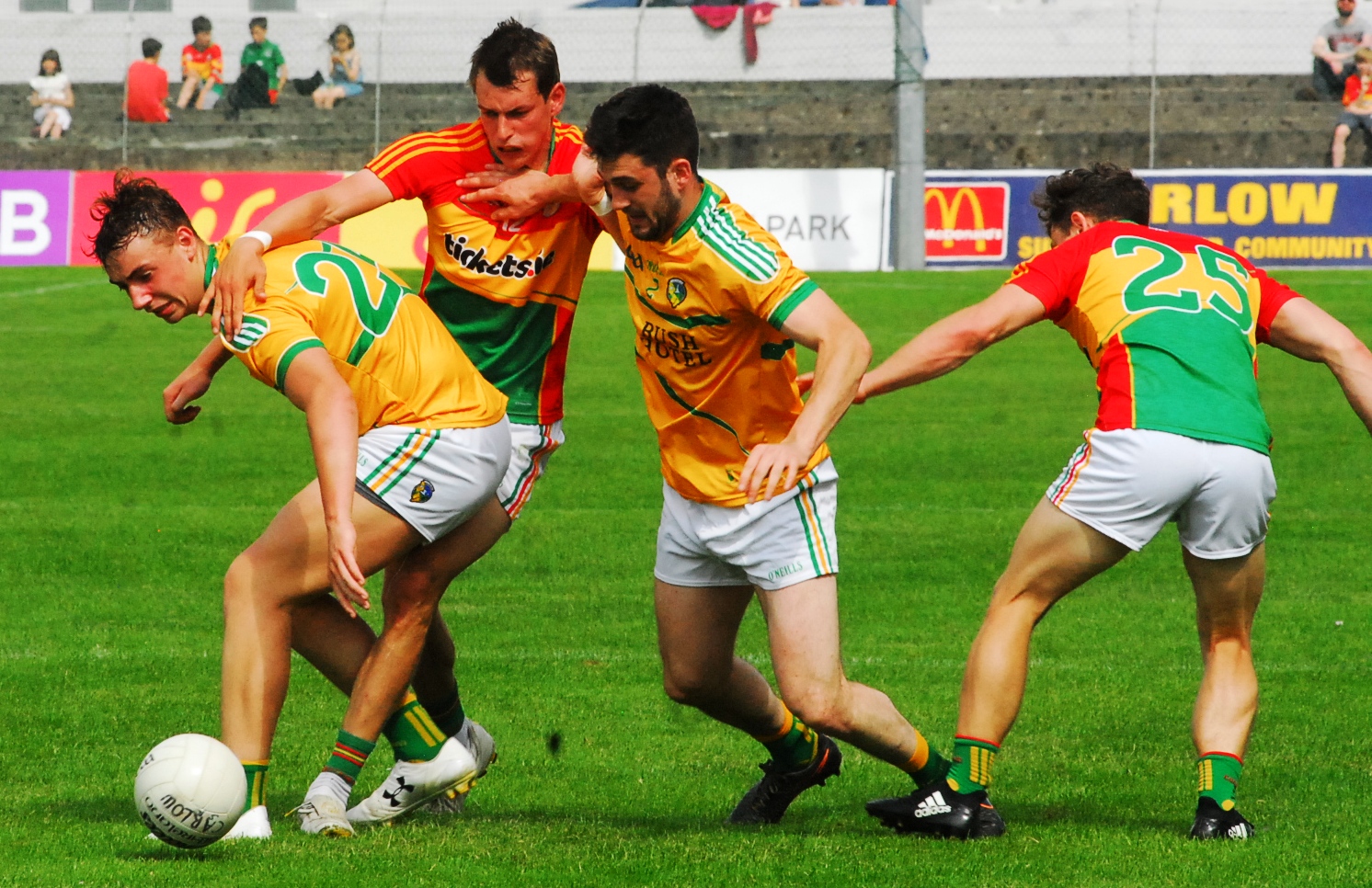 Main Man: Ryan O'Rourke has an excellent first half and caused Carlow's defence no end of problems, Brendan Gallagher, Gary Reynolds, Ronan Gallagher, Conor Cullen, Paddy Maguire, Dean McGovern all impressed in the first half but hard to pick out anyone in the second.

Talking Point: It is hard to know what to make of this game as Leitrim produced some clever, intelligent and patient football in the first half, qualities that disappeared completely in the second half as Leitrim looked stuck to the ground as Carlow upped the pace and the intensity.

Turning Point: Halftime - Carlow were starting to come into the game as halftime approached but Leitrim were holding them. But the change in fortunes after the break was mind-blowing.

Ref Watch: Padraig Hughes was solid, may have been lenient to Gary Reynolds but hard to argue too much with any decisions.

Highlight: Some brilliant scores from Ryan O'Rourke and Brendan Gallagher in the first half allied with some excellent football from Leitrim.

Lowlight: The entire second half was a huge disappointment as Leitrim failed to replicate the energy and direction of the first half.