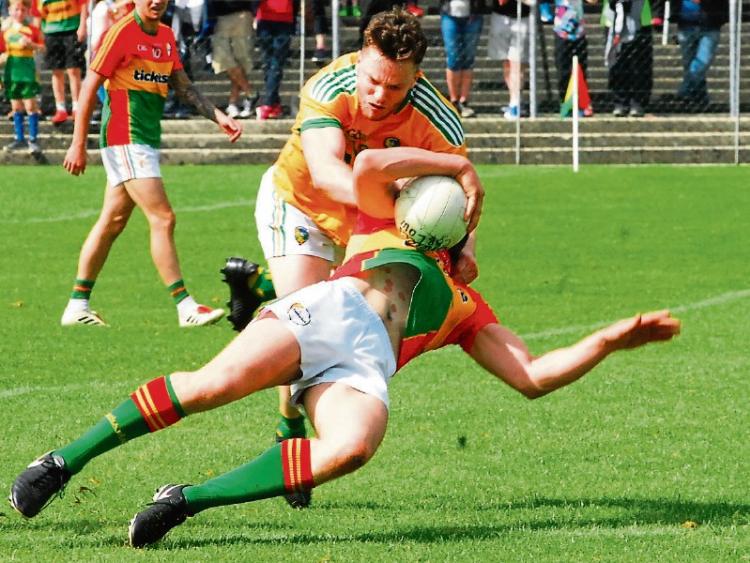 Gary Reynolds was lucky to avoid more than a yellow after this high challenge on Carlow's Sean Murphy last Saturday. Photo by Willie Donnellan

Firstly, the perspective. This Leitrim team is the youngest and most inexperienced I have ever watched and as the game moved into the decisive third period that cost them the game. Some of the decision making and skills execution during that period made for tough viewing and I’ll look at the consequences later.

However, the leadership some players displayed in the first half belied their inexperience and hints at the team’s potential.

The management team also made the hard but correct decision to drop a number of key starters in light of unacceptable disciplinary indiscretions that occurred before the Roscommon game, but only came to light thereafter.

In plain English, that means a small number of lads who were preparing for the biggest game of their lives let their teammates, management, and supporters down by drinking when they had agreed that no alcohol would be taken on-board.

But it’s too easy just to blame those players, whom I understand have apologised for their behaviour. That behaviour doesn’t happen in a vacuum. It happens within a culture.

Just as it used to in Donegal before Jim McGuinness laid down a decree that it was completely unacceptable to break one’s word to those within the inner circle of a county squad. Saying one thing and doing another would no longer fly.

George Dugdale and Barney Breen were effectively removed as the Leitrim management team for daring to drop players for the same unacceptable behaviour in 2013. Those who led that charge, and there were many, helped ensure that individual whims and indiscretions could continue to supersede collective commitment and excellence.

Shane Ward, during his time as manager, was sniped at constantly for not selecting players who wanted to be seen as county players but were unwilling to give the necessary commitment.

Those broken records needs to stop playing in Leitrim and managers need to be backed for making tough calls based on long-term aspirations. As renowned business leader and author Zig Ziglar once put it ‘it is your attitude not aptitude that will determine your altitude’.

Throw in a couple of injuries, particularly the loss of team captain Donal Wrynn, and Leitrim’s starting line-up and squad was weakened considerably. But Carlow were without their talisman Brendan Murphy through suspension.

Now for what happened on the field. Those who did start applied themselves as well as could be expected in the opening 35 minutes and showed enough bright shoots to be optimistic for the potential development of this team should they stay together for sufficient years.

Their energy and effort couldn’t be faulted. They worked hard and when they displayed enough patience to deliver the right ball to their inside forwards, Leitrim took some great scores.

But the warning signs of what was to come in the second half was plain to see. Carlow’s game was built almost exclusively on running hard through the Leitrim defence and on numerous occasions they carved through us like a hot knife through butter.

They had their eye on goals but poor finishing and decision making – as well as one great save from Brendan Flynn – meant they didn’t make the most of their chances in the first half.

Something needed to happen at half time to address the gaping hole through Leitrim’s midfield and defence and to counteract the powerful running of Sean Murphy, who was my man-of-the-match by a New York mile.

He controlled the game, inflicting untold damage on Leitrim in the second half especially (having threatened it in the first) as he injected a degree of pace and physicality into the game that we couldn’t live with.

Leitrim opted to play with a sweeper and the tactic was ineffective. A sweeper is deployed defensively to intercept primary long or early ball played into a forward line. Or to provide back-up to effectively mop up any secondary ball that spills when his six defenders compete for primary possession with their opposite numbers.

That way a defender knows all he must do is break a ball away from his forward and the sweeper should be on his shoulder to collect the spoils. As Carlow preferred a running game, very little ball was delivered into the Leitrim defence that Gary Reynolds could get his hands on.

Carlow used half-time to their advantage. In the first half, they were happy to defend on a more man-to-man basis and paid the price. In the second period, they established a strong line of defence across their 45 that included both midfielders and often their wing forwards. Leitrim ran into this line time and again and were turned over.

Carlow then broke into acres of room with devastating effects, registering both goals and numerous points from such scenarios. Unfortunately, as the pressure mounted and Carlow upped their game Leitrim’s inexperience came to the fore. They tried to force things. They hit hail Mary shots. They tried to deliver impossible passes to well-marshalled men inside.

Unfortunately, a long-standing Leitrim ill was also evident in the second half: the tendency to carry ball into the tackle against a more physically developed side even when a pass was on. This has been a failing of Leitrim teams in recent years and me must learn.

To my mind, the tendency arises from bad habits built at club level. Most club players of inter-county standard can get away with this in Leitrim club football. They carry the habit into the inter-county scene and get punished. Badly. Turnovers of this nature contributed significantly to our defeat.

But more importantly, we need to show that we are learning from our regular mistakes instead of repeating them ad nauseam. Every player needs to study the video of the game closely and assess their contribution with brutal honesty. And then promise himself he will repeat what he did well and try to eradicate the mistakes.

The only two bright sparks of the second half were exceptional points by Ryan O’Rourke and sub Darragh Rooney. But it’s not fair to be too harsh on these young players. Their failings came from a lack of physical conditioning and inexperience when the game was in the melting pot. Both can only be addressed with time.

You could see the confidence drain from the players as the second half wore on and I felt for them. They didn’t know how to break down Carlow’s defensive line and in their vain attempts to do so, they left themselves stretched at the back which played into Carlow’s hands perfectly.

I’m sure there is a lot of soul searching going on this week. There should be. But it’s essential that this young squad stick together and bring the learnings and the hurt from this year into next season. I promise you it will stand to you.

Read the (auto)biography of any great sports star and you will see you that it was the pain and the defeats from which they learned most. The majority of you are in the infancy of your inter-county careers.

Your only concern should be about returning next season fitter, faster, stronger, more determined, thick skinned, and willing to learn more than this year. It’s now that your thoughts need to turn to what it will take to win promotion from Division 4 in 2018. And it’s now that your actions begin determining whether that will happen or not.

My next column will return to the topic of the broader state of Leitrim football, focusing on the structures and supports that need to be put in place to ensure that our club and county team can achieve their fullest potential.