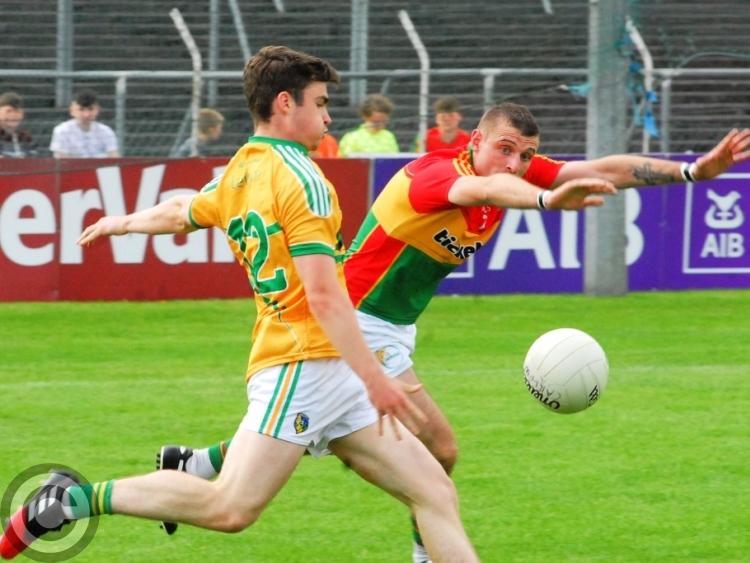 Ryan O'Rourke shoots for a point against Carlow. Photo by Willie Donnellan

Ryan O’Rourke may be one of the new breed on the Leitrim team but there is an old head on young shoulders as the Fenagh man talked of what he termed a disappointing end to the year.

The St. Caillin’s clubman was the key figure in an excellent first half display as he scored three from play, adding another in the second half, but it was the second half fade out that dominated Ryan’s thoughts when he chatted to the Observer.

“We started well there and we went five or six-one up, the early ball was working and we seemed to be winning around the middle of the field. Then ten minutes before halftime, they started winning the breaks and they started running through us.

“To be fair, the last five minutes, we got a couple more but then in the second half, they just took over, breaking through the middle and we just didn’t deal with it at all.”

As analysis go, Ryan was spot on and he felt that Carlow cut off the supply in the second half - “It was working well in the first half, even the looping ball and we felt good, we were doing what we wanted to do and we felt we would push on.

Neither did Ryan feel that the Roscommon game affected Leitrim - “After the Roscommon game, we were obviously down but we put in two big weeks of training, we worked very hard for this, we were hoping to be in the draw on Monday but it is a demoralising way to end the year.”

But the young Fenagh star has hope for the future and set his sights on promotion from Division 4 - “We have a very young panel, we have a lot of lads 18, 19, 20 and all we have to do is regroup in September, October, get back in the gym and get bigger, stronger, fitter, everything you have to do.

“Division 4 is our main target next year obviously next year, that will be our number one target and we will wait and see the fixtures for the championship. I have no doubt that we will definitely push on, we have a young team there, plenty of potential and hopefully our day will come.”