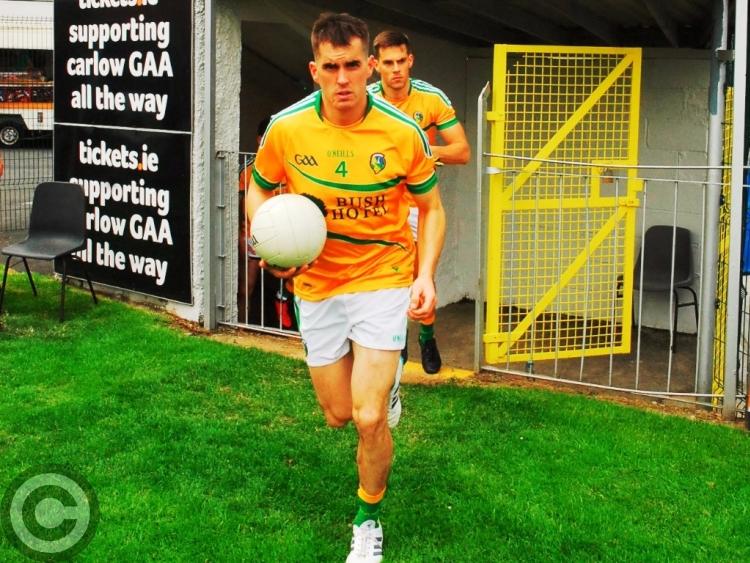 Paddy Maguire leads the Leitrim team out of the tunnel in Netwatch Cullen Park. Photo by Willie Donnellan

Hope may just be the cruellest trick to play on a footballer as an ashen faced Paddy Maguire acknowledged after the final whistle last Saturday.

Leitrim led by two points at halftime and looked in a great position to push on but it was Carlow who turned up the heat to run out seven point winners, leaving captain Paddy Maguire very frustrated.

“We started very well, every man, what we asked for, gave it hell for the first 20, 30 minutes. We brought great workrate, great intensity, we had a few mistakes and we stopped them for two or three goals, Brendan made a great save.

“We were coming in at halftime nine-seven up. We thought coming out in the second half that we would really get at them again but we never got going, only in patches and that was disappointing.”

The loss of captain Donal Wrynn, injuries and a black card were big blows  - “I suppose we were up against it, we lost a lot of players, Donal and that and the black card was a big blow, we needed everyone on the day and we couldn’t afford to lose anyone to the black card.”

Yet the Glencar/Manorhamilton man was more than happy with Leitrim’s first half display - “That first half, we haven’t played as well as a team in the first half for some years. The second half, I thought we would push it over the line but it never happened, Carlow got a goal and I think that was the turning point.

“They kept tackling us, turning it over and coming through the middle, their number nine Sean Murphy, his pace, that was hard to control. I thought honestly we would come out and get over the line but it just didn’t happen.”

Despite the disappointment, Paddy is determined to push on next year - “It is a young team, we will regroup again and we will be back next year. Take a break now and we’ll regroup and we will go through whatever worked this year and make a good push for next year.”