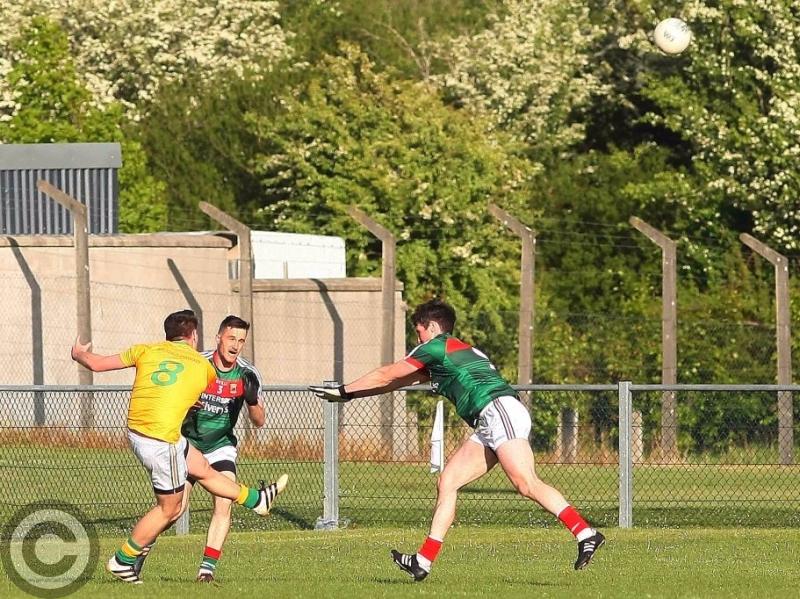 Domhnaill Flynn scores a point against Mayo in the Connacht Final.

You’d hardly know it but Leitrim are taking on Kerry in an All-Ireland Semi-Final next Saturday in Limerick and there doesn’t seem to be any interest.

The All-Ireland Junior Championship Semi-Final in the Gaelic Grounds (3 pm throw-in) sees the Connacht Champions pit their wits against  reigning All-Ireland Champions Kerry in what is just the latest in a line of David v Goliath clashes.

Leitrim beat Galway in the Provincial Semi-Final before dethroning last year’s All-Ireland finalists Mayo in a thrilling Connacht Final back in May so the county’s fans should be hopping with anticipation.

That they are not is down to several factors - the Junior Championship, no more than Minor or U21, is never going to attract the attention of the county’s fans in the same way as the Senior.

The exit of the Senior team from the All-Ireland Qualifiers certainly dulled the enthusiasm of the county’s fans and it is entirely natural that the focus of the Leitrim GAA public is turning quickly to the impending club championship.

But most of all, the low-key build-up is down to the fact that Leitrim are devoid of so many of the players who were so key to the Connacht Junior Championship triumph.

The fact that Leitrim were able to pick a “second-string” side drawn from members of the County Senior panel ensures Leitrim are able to compete with Galway and Mayo in Connacht but if the county do progress, the Junior team is then stripped of players  once the  Senior side plays.

Keith Beirne, Wayne McKeon, Oisin Madden, Noel Plunkett, Dean McGovern, Keith Keegan, Niall McGovern and Gary Plunkett all saw action with the Seniors so are ruled ineligible. Others players like Conor Cullen and Brendan Gallagher are also ruled out after their Senior roles.

Admittedly that leaves experienced players like Philip Farrelly in goal, Jonathan Cassidy, Alan Armstrong, Nicholas McWeeney, James Campbell, Domhnaill Flynn, Cathal McCrann but the   boost Leitrim got from their Senior players is gone although the likes of James Mitchell and Jack Heslin can come in.

Leitrim defied something similar  to reach the All-Ireland Junior Final  in 2004, drafting in what was almost a new team. But this Leitrim team is facing a Kerry team laden with incredible talent, a Kerry side looking for a third All-Ireland Junior title in a row.

Just consider the riches available to the Kingdom. When Kerry named their team to take a  Cork team featuring five members of the Rebels 2016 All-Ireland U21 final side, the Kingdom named nine players who have won All-Ireland Minor medals during Kerry’s three-in-a-row!

Just consider that now - nine players who have All-Ireland Minor medals who play with clubs who are not Senior in Kerry and all bursting themselves to impress Eamon Fitzmaurice, a Junior team who feature the controversial Brendan O’Sullivan who was recently a member of the Kerry Senior panel!

Defenders Michael Foley and Daniel O’Brien were part of last September’s triumph against Galway with O’Brien involved  in the 2015 success over Tipperary. Midfielder Roibeárd Ó Sé was a substitute in the 2014  win over Donegal while forwards Killian Spillane and Tomás Ó Sé started in that game.

Amongst the subs are Stephen O’Sullivan, part of the successful sides in 2014 and 2015, Brandon Barrett was a winner in 2015 and the pair of Liam Carey and Ivan Parker sampled glory in 2014.

That is a level of experience and expertise that Leitrim just can’t match - ever!

And just to make it  more daunting, reports suggest that the Kerry Juniors have been training three times a week so the odds are very much against a Leitrim victory.

Leitrim should, in theory, get a boost from the fact that clubs are in full championship preparations so anyone drafted into the squad should be in club championship shape, a different prospect to when Seamus Quinn went looking for players in April.

Even with a full-strength team, a team boasting all the players who appeared for the Senior side, Leitrim would struggle to match this Kerry team and as much as one hates to write it, the Connacht Green & Gold are in for a tough, tough time against the Munster Green & Gold.