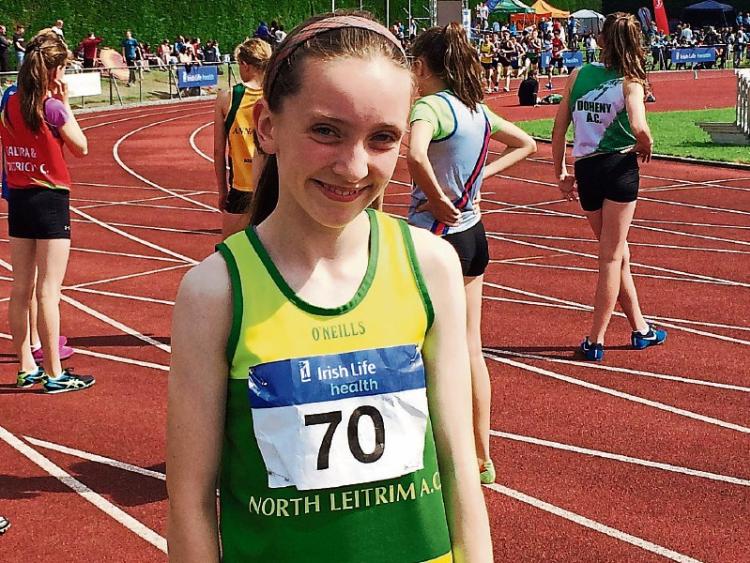 Niamh Carolan finished fourth in the Athletics Ireland U14 1,500m in Tullamore

North Leitrim AC’s Niamh Carolan produced a superlative performance last Sunday in the Athletics Ireland Juvenile Track & Field Championships but for the second week in a row was denied a medal in heartbreaking fashion.

The Kinlough girl lost out on a bronze medal in the U14 1,500m by less that three tenths of a second after a remarkable effort that saw her lead the race in the early stages and drop back to seventh at one stage but challenging for third place at the line.

It was the second heartbreak for Niamh in the space of a week as just seven days previously, the North Leitrim AC walker had crossed the line first in the U14 Walk only to be heartbreakingly disqualified after picking up a third and final warning in the last 40 metres of the 2Km event.

Niamh had been leading the entire field which included a number of English walkers who guested at the event.

Last Sunday, Niamh took out a very strong pace in the first lap and built up a lead of five to ten metres after 200m. However, it looked as if she was paying a heavy price for her pace as she slipped down the field after two laps.

But a strong surge down the back straight brought her back into the top three before the leading runners again pushed past her. The Kinlough runner was outside the top five with 300m to go but another massive surge brought her into third around the final bend.

However, Ratoath’s Aimee Doherty managed to squeeze by in the final 30 metres, her time of 4.55.58 snatching the bronze off Niamh who ran a massive new personal best of 4.55.84.

North Leitrim AC also saw Diarmuid Giblin finish in fourth place in the U15 250m Hurdles after he qualified third fastest from the heats, his time of 37.66 seeing him finish second in his heat with clubmate Darragh Mitchell running 41.01 in the first heat.

In the Final, Diarmuid moved up a gear to record a new best of 37.01 but unfortunately Alex O’Shea of Newbridge improved even more as he registered 36.42 to take the bronze. Diarmuid also ran the 200m, finishing 10th overall.

Ella McDaid also produced a good performance in the U15 250m hurdles, winning her heat in a time of 38.76, a time that ranked her fourth going into the final but the effort took it’s toll as she finished seventh in a time of 39.19, a strong performance. Ella went on to finish 13th in the 200m.

North Leitrim’s throwers had a good day with Cormac Fahey sixth in the U15 Discus, 11th in the Shot and 13th in the High Jump while Shannon O’Hagan was sixth in the U16 Shot while Aaron Bradshaw and Oisin Carolan sixth & seventh in the U17 Hammer, John Birney eighth & ninth in the U16 Javelin and Shot put.

Carrick AC had a number of competitors in the 200m; Sophie McCabe ran 28.80 in the U14 heats, Alannah McGuinness 27.90 in the U16 while Clodagh Sheerin had the misfortune to be disqualified for a false start in the U17.

Madden will run the 100m and 200m with the shorter event taking place on Saturday while O'Donnell will go in the 110m Hurdles on Sunday while their clubmate Cathal McElgunn goes in the 400m heats on Saturday and the trio may also team up for the 4 x 400m relay on Sunday evening.

Ballinamore AC will host their annual Festival 10K and 5Km road races on Friday, August 18, at 7.30pm. Entries are now open for a very popular event that draws a good quality field each year.