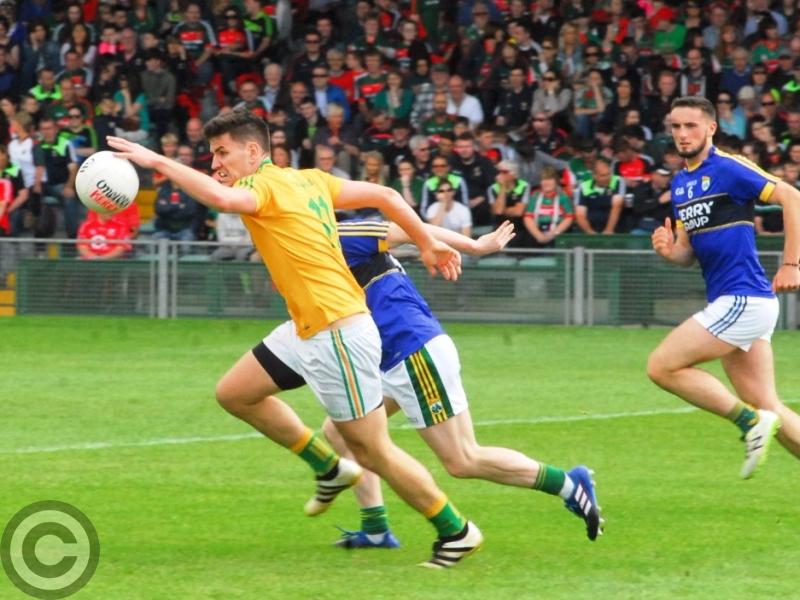 Domhnaill Flynn sets off on a Leitrim attack. Photo by Willie Donnellan

A battling and proud Leitrim battled to the very end against a highly rated Kerry in the Gaelic Grounds on Saturday afternoon but the class and craft of the Kingdom was just too much for Connacht Green & Gold.

Trailing by seven points at halftime and ten points with 13 minutes left on the clock, Leitrim showed their pride by reducing the gap to five points as the game entered injury time but the damage had been done long, long before that.

Two bursts of Kerry scores early in both halves opened up gaps that Leitrim just couldn’t cope with and despite giving it their very all, the class and all-round strength of the Kingdom told it’s inevitable tale.

That this was a game that could have been closer is not in doubt as Jack Heslin and Cathal McCauley both missed gilt edged goal chances at a time when Kerry were stamping their authority on the game.

Heslin’s chance came 20 minutes into the first half, McCauley’s 30 seconds into the second while there were two other half chances as Leitrim struggled to make the most of the chances they did create.

Considering Leitrim were shorn of eight players who played key roles in the Connacht triumph, this was a heartening performance for the handful of Leitrim supporters who made the journey to Limerick and not the massacre many of us feared.

It was a remarkable job by manager Seamus Quinn considering the team had one training session and drafted in players like Robbie & Daniel Lowe, Cian Clinton, James Glancy of St. Mary’s and Caillin Canning who hadn’t been involved in the provincial campaign. 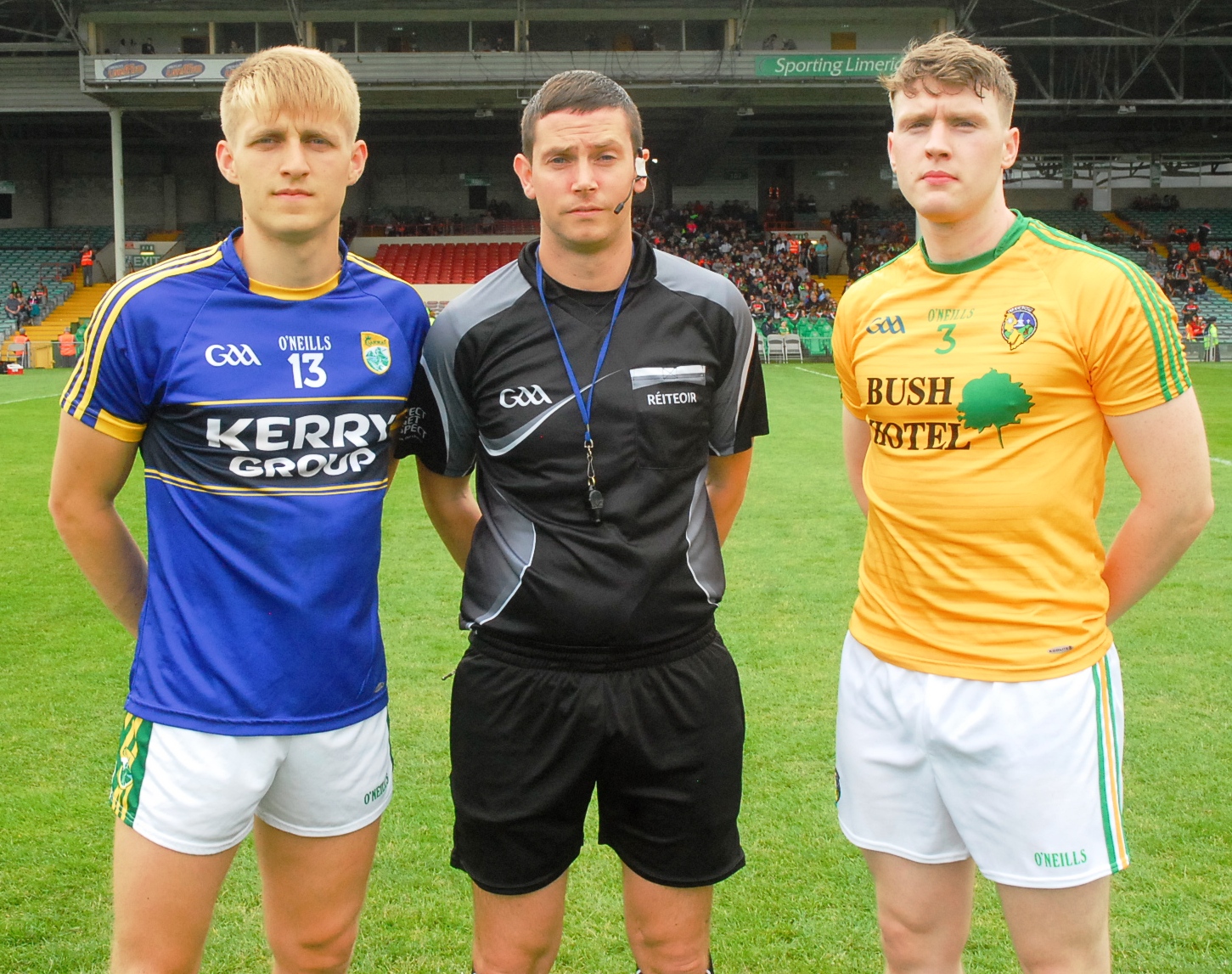 Kerry opened the scoring with an Conor Cox free after a James Glancy foul on Tomas O’Se but it was Leitrim who started with a bang, Cathal McCrann brilliantly fielding a long ball under pressure before turning sharply and sending the ball back across into the far corner for a stunning goal.

Kerry’s response was impressive as Brendan O’Sullivan’s high ball was some caught under immense pressure was Tomas O’Se, the Gaeltacht man sustaining a heavy hit in mid-air but he picked himself up, made some room and fired low to the Leitrim net.

Cathal McCrann saw a shot blocked before Leitrim got a second yellow, Alan Armstrong earlier booked with James Glancy joining him and Kerry quickly doubled the lead with a Cox free and a quick fire James Walsh point after an O’Sullivan mark in the middle of the park.

Leitrim could have hit back with a goal when Robbie Cunningham released Jack Heslin down the left wing with the Kerry cover exposed. The speedy Gortletteragh charged clear but under pressure, the wing-forward saw his shot hit the post and side-netting in a costly miss for Leitrim.

Conor Cox and Jack Heslin swapped points while Robbie Cunningham saw a shot blocked as the halftime score read 1-10 to 1-3 at the break. 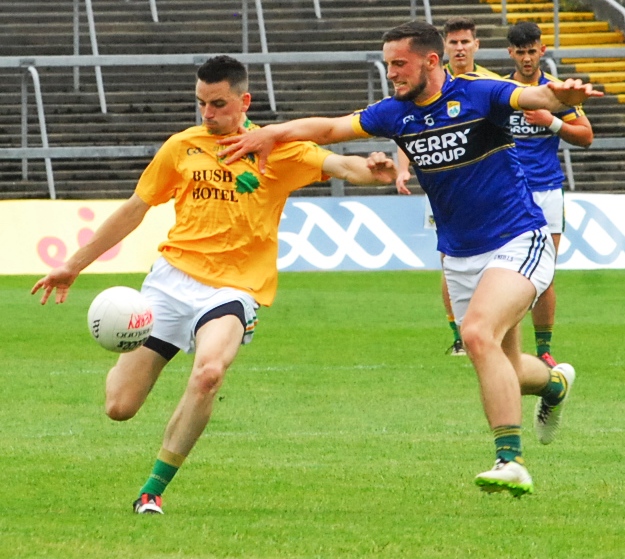 Nicholas McWeeney gets his shot away under pressure. Photo by Willie Donnellan

The second half almost started with a bang as from the throw-in, Leitrim won a free and a quick ball released Nicholas McWeeney as he charged through on goal down the centre of the field. With two team-mates on either side, McWeeney opted for an early pass to Cathal McCauley.

That narrowed the options and Kerry were able to close the gap as the Drumkeerin man shot into the side net after just 30 seconds.

Jeff O’Donoghue and McWeeney swapped points with Leitrim trying to send long balls to McCrann, a Shane Quinn effort seeing the keeper and the Gortletteragh man collide but when the ball broke loose, there was no Leitrim man anywhere near the ball.

Kerry started to kick some bad wides but saw Philip O’Connor point before another O’Donoghue point, from a tight angle, and one each from Liam Carey and O’Conchuir left ten points between the teams after 16 minutes of the second half.

The Kingdom then ran the bench, introducing four subs over the next six minutes while Leitrim also brought on Caillin Canning, Francis Flynn and Daniel Lyons to go with the earlier subs of Daniel and Robbie Lowe, the game became fractured and disjointed.

Cathal McCrann ended a 13 minute spell without a score with a 35 yard free before another high ball into towards McCrann saw the ball break to Robbie Lowe who drove a powerful shot over the crossbar.

Fellow sub Cian Clinton added another with five minutes to go before Nicholas McWeeney surged forward after a soft enough free, pointing nicely from distance. Shane Quinn added a nice score and suddenly the gap was down to five points but Kerry weren’t long in responding, Philip Farrelly forced into making a good save to deny the Kingdom a certain goal before O’Conhuir fired over.

Cian Clinton finished Leitrim’s tally to again cut the gap to five points in the first minute of five minutes of added time but Kerry had no intention of leaving the door open for Leitrim and a nailed on black card for James Mitchell led to an O’Donoghue free and an easy O’Conchuir point to seal the Kerry victory.

Jack Heslin fires a shot into the side netting after 20 minutes in the first half. Photo by Willie Donnellan 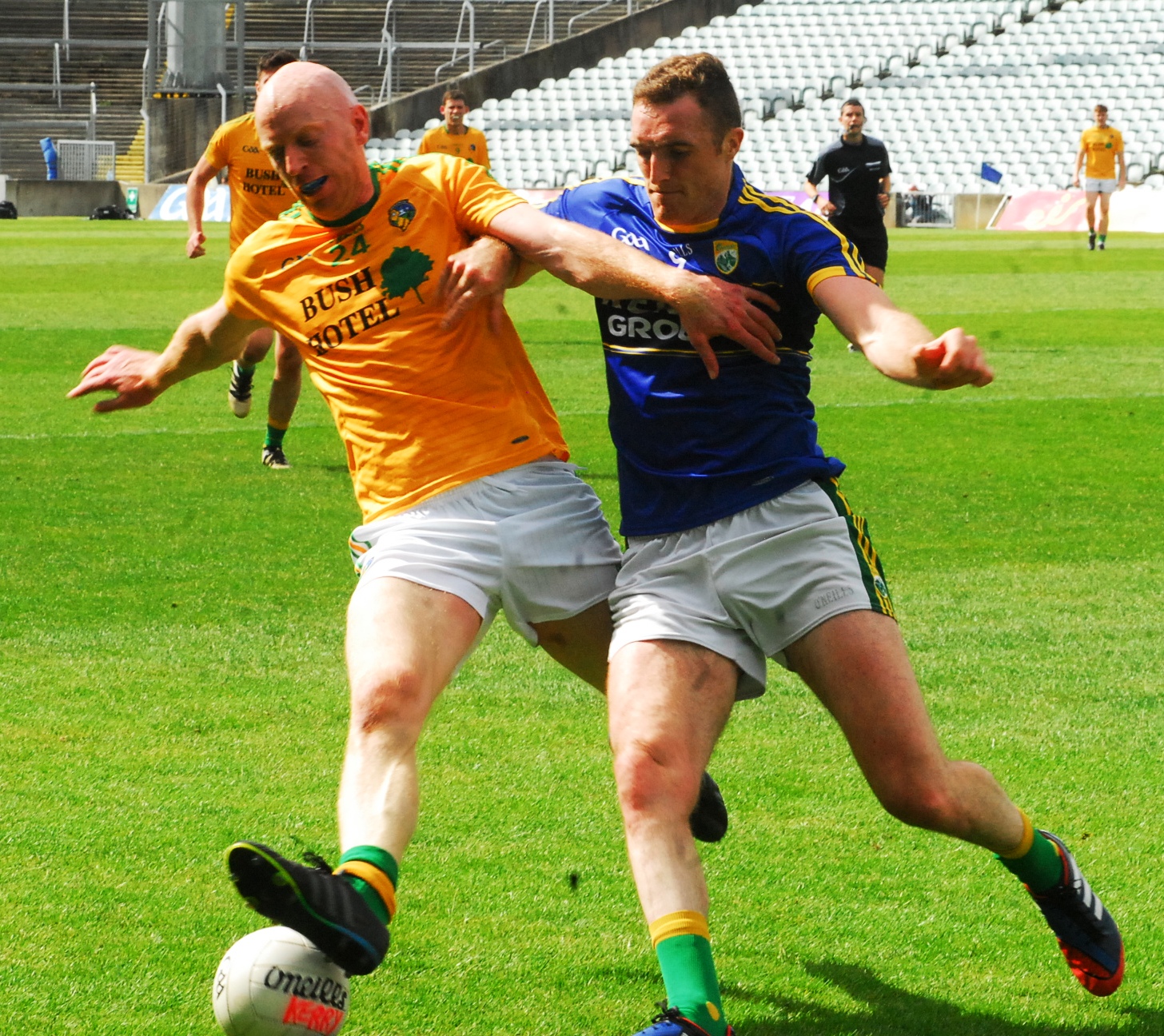