Kerry strength & class prove too much for battling Leitrim Jack Heslin fires a shot at the Kerry goal in the Gaelic Grounds. Photo by Willie Donnellan

In the end, it was not the hammering most expected as Leitrim took something of a moral victory from last Saturday's All-Ireland Junior Semi-Final loss to Kerry.

Moral victories in sport are notorious and hardly worth more than a consolation to a losing team but for this Leitrim junior team, shorn of so many of the key members who delivered the Connacht Junior crown in May, this felt almost like a victory.

Incredible as it may sound but it was Leitrim who left the field ruing missed chances as two clear cut goal chances were driven wide from close range and another two half chances went abegging too as Seamus Quinn's team defied the odds to push Kerry all the way.

Yet as much as we might want to bask in the  glory of a moral victory and I'm certainly not a fan of the concept, the fact is that Kerry controlled 75% of this contest and opened up a ten point lead in the second half before emptying their bench in the final quarter.

Leitrim threw caution to the wind in the final ten minutes and reeled off five points to cut the Kingdom's lead in half but even the smallest hint of  a Leitrim comeback saw the Munster champions hit back with three points in added time.

Truth be told, Kerry showed very early what they could do at full tilt when Cathal McCrann's second minute goal stunned the favourites and even the small die-hard core of Leitrim fans that made the long journey to the Gaelic Grounds.

Kerry's response was as deadly as it was efficient as Tomas O'Se made an impossible high catch while taking  a heavy knock, getting up and blasting to the net and by the time Jack Heslin got Leitrim's next score 22 minutes into the second half, Kerry had added eight further points to take complete control.

A rout looked on the cards but credit Leitrim's spirit and their resilience as they crowded out the Kerry attack, forced them into some terrible shooting in the second half

Leitrim will rightly look back at those crucial  missed goal chances - Jack Heslin firing into the side netting on 20 minutes when there was six points between the teams and Cathal McCauley doing likewise just 30 seconds into the second half.

The Green & Gold needed both those chances to go their way and there is no guarantee that the game would have followed the same course as Kerry definitely dropped their intensity after opening up a ten point lead.

But the misses, and if we are being honest, they were bad ones and would have brought a greater tension to a contest where Kerry seemed content most of the time to bide their time as the Kingdom's reporters said it was a lacklustre display from their side.

Maybe that was down to attitude as they were such red hot favourites and quickly built up big leads but a lot of it was down to the spirit and resilience shown by Leitrim's players who can take a lot of genuine pride from the performance.

Cathal McCauley drives his shot into the side netting in the first minute of the second half. Photo by Willie Donnellan

Leitrim flooded players back into defence and tried to hit on the break, a tactic that was sporadically successful but gained a lot of traction when Leitrim got more support for Cathal McCrann and sub Robbie Lowe.

McCrann was a real leader for this Leitrim team and still looks as if he could do a job at a higher level while Liam Ryan, Nicholas McWeeney, Jack Heslin, Alan Armstrong, Shane Quinn & Domhnaill Flynn all had good moments.

Where Leitrim fell down, and this is a common complaint, was in handling errors and turnovers, Kerry stalling promising Leitrim attacks time and time again with little more than good positioning or timely tackles.

But as annoying as those errors can be, it was Leitrim's spirit that had the Mayo fans cheering them on and it was that heart that Leitrim can build on in the future.

Cathal McCrann's goal was a rare bright note from the first half as Kerry reeled off 1-8 and Leitrim managed just one point from Jack Heslin after a missed goal opportunity.

Leitrim turned in a better second half display but Mayo matched the Green & Gold's eight points. Cathal McCauley's goal chance might have boosted Leitrim but keeper Philip Farrelly had to make an excellent save late on to deny Kerry a second goal.

Leitrim's best moments came with runs from deep as Kerry dominated midfield and points from Nicholas McWeeney, Shane Quinn, Robbie Lowe and Cian Clinton from play showed that Leitrim could cause the Kerry defence problems.

Unfortunately most of those scores came after Kerry had bolted but it doesn't take away from the spirit and heart Leitrim showed in Limerick. 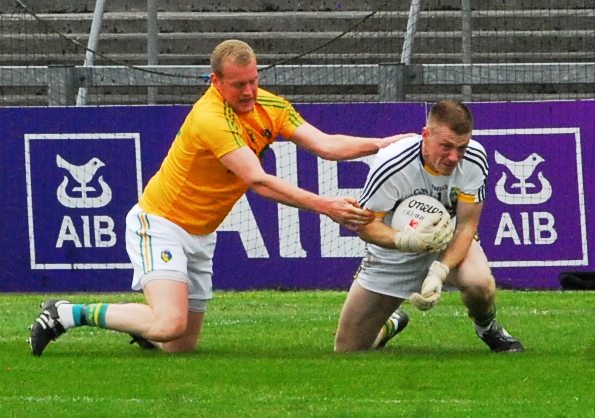 Talking Point: To be honest, most travelled expecting a hammering in Limerick. Instead, we got a battling display and while Leitrim didn't look like winning, the Green & Gold went down fighting, giving their all and earning the support and applause of the Mayo fans.

Turning Point: Apart from the early exchange of goals, there wasn't really one turning point. One can point to missed goal chances but Kerry always looked capable of raising their game if the need arose.

Ref Watch: Dublin official Barry Tiernan had an easy outing, did his job effectively and maybe gave Leitrim a rub of the green a few times. But a good outing all the same.

Highlight: Cathal McCrann's second minute goal was a real boost for the underdogs but the real highlight was the way Leitrim threw caution to the wind in the last 10 minutes and gave it a real go.

Lowlight: Kerry's two periods of dominance in the first and second half saw them pin Leitrim in their own half for long periods with Leitrim only scoring twice in the first half. 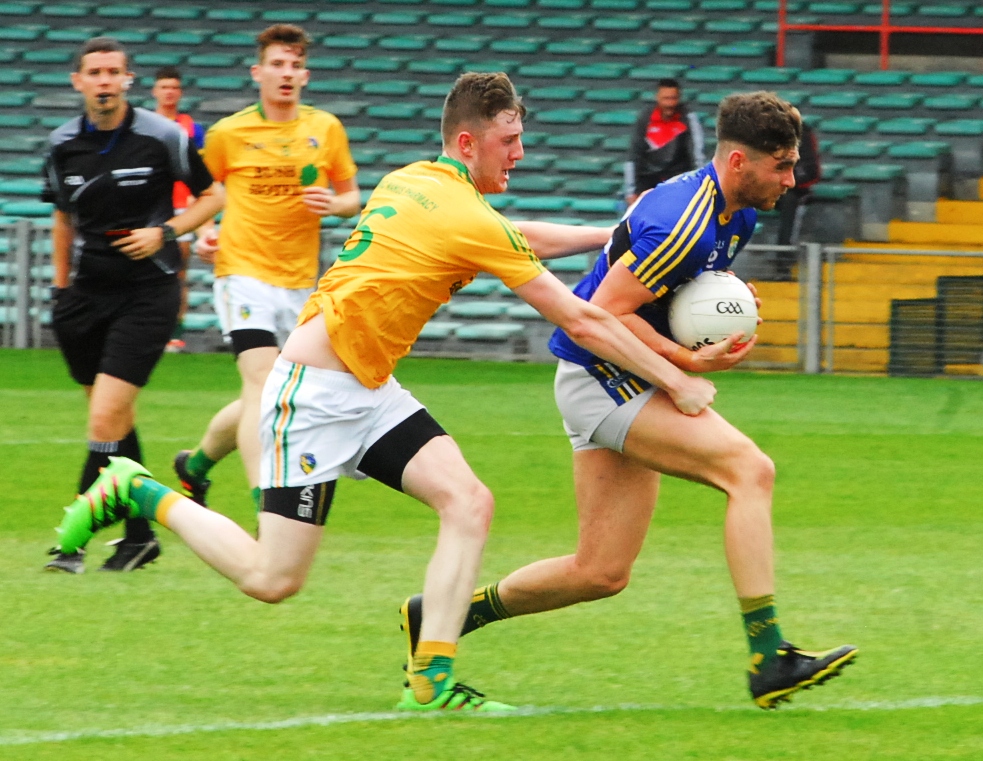 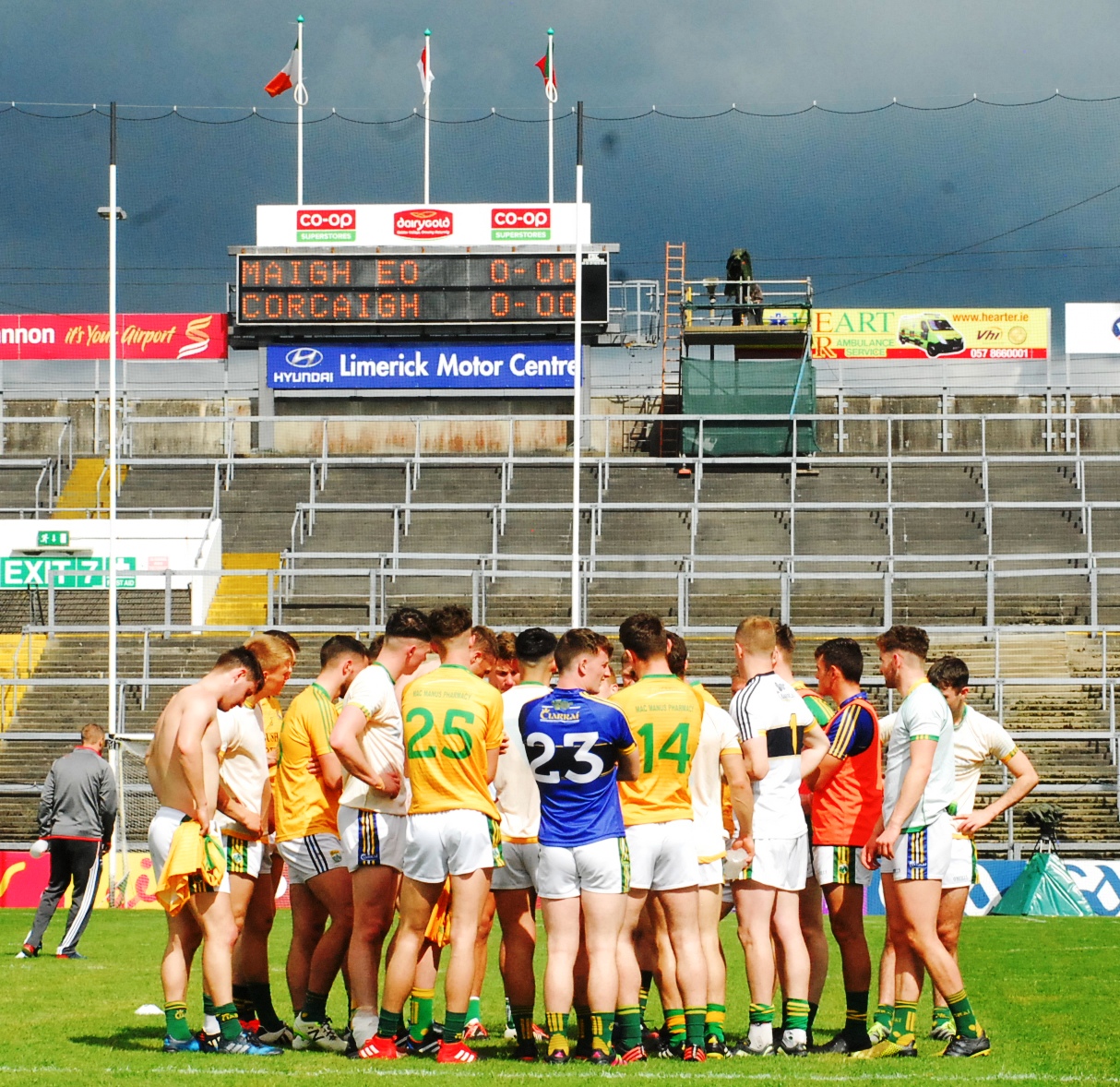 An unusual photo of the Kerry team, decked out in Leitrim jersey's undergoing a debrief in the middle of the Gaelic Grounds. Photo by Willie Donnellan