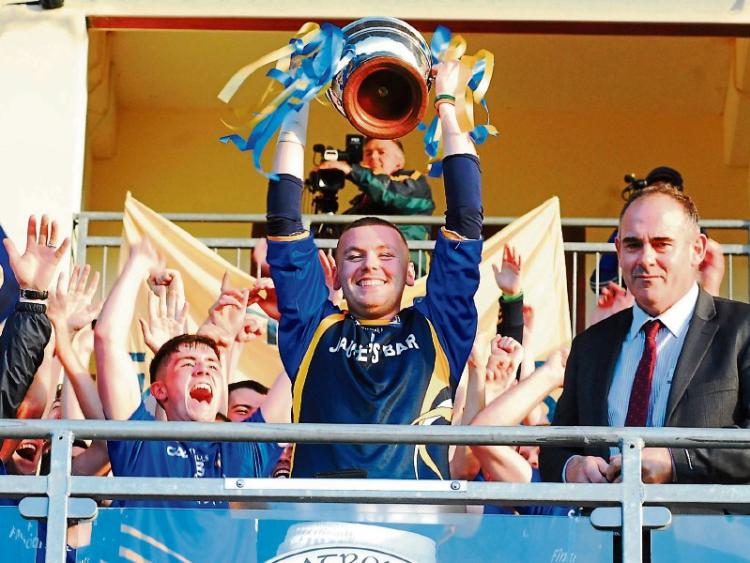 Aughawillan captain Colin Maguire lifts the Fenagh Cup last year - who will be celebrating in October? Photo by Willie Donnellan

A new era for Leitrim Club football begins next Friday night when the Connacht Gold Senior Championship starts with the titanic clash of champions Aughawillan and 2016 winners Mohill.

A new Championship structure which delivers two more games in the group stages and a guaranteed knockout/ playoff game for all 12 teams in both the Senior and Fox’s Monumentals Intermediate Championship is a huge test for everyone involved with the game in the county.

Two six teams groups with the top four qualifying for the Quarter-Finals and the bottom two going into the relegation playoffs means that every single team has something to play for and is the most radical revamp of the county’s premier club competitions since the Group stages were first introduced.

The extra games will test teams in a way that the previous systems simply didn’t and a tangible prize for finishing top of the group by being pitted against the bottom team from the other group in the quarter-final is a welcome reward for teams to perform in the Group stages.

The Leitrim County Board had planned to give teams a break midway through the group stages after three games but having lost their planned start date last weekend due to the Junior team’s All-Ireland, the new group stages become a test of resolve and resources as much as of footballing ability.

Injuries, suspensions and tiredness will all play a huge part in the outcome of the group stages as the five-game series are a test of endurance before the sprint to the line in the knockout stages.

Of course, the Group stages will make some teams as much as break them - some will find form, some will have flaws exposed and weaknesses exploited but the expanded group stages will mean a tougher and better test to find the best teams in the county.

As with any format, there are some flaws in the system and it will take just two wins out of five, provided the teams you beat are also beaten by everyone else, to reach the Quarter-Finals but the carrot of the seeded draw for the Quarter-Finals should be a big enough incentive for teams to produce their best each and every day.

A lopsided Group One in the Senior Championship has put most of the main contenders in the one pot while there are three Division 2 League teams in the second group.

On the face of it, Allen Gaels look like certainties for the relegation playoffs based on the League results and are up against five teams who legitimately believe they have genuine hopes of lifting the title.

Yet the Drumshanbo men were closer to teams who finished above them in a lot of games than bald scorelines would suggest and it only takes one or two games to go their way and there would be a big team in the relegation series.

Group One, however, does contain quite an amount of mouth-watering clashes - the defending champions Aughawillan, League champions Mohill and 2016 Intermediate winners Ballinamore Sean O’Heslin’s along with semi-finalists Gortletteragh and this year’s League finalists Melvin Gaels.

Group two appears a much easier proposition with three Division 2 teams in Bornacoola, Annaduff and Drumreilly and the relegated St. Patrick’s Dromahair facing the Glencar/Manorhamilton and St. Mary’s Kiltoghert.

For the first time in years, the Fox’s Monumentals Intermediate Championship lacks an out and out favourite in the way that Melvin Gaels, Gortletteragh, Dromahair and Sean O’Heslin’s all were in the past.

Last year’s defeated finalists Drumkeerin got a huge boost by retaining their Division One status in recent weeks but so too did Fenagh St. Caillin’s while Aughnasheelin were much higher up the table than either of them - and all three are in the one group!

Not only that but Ballinaglera, promoted to Division One next year, are in the same group along with last year’s Junior Champions Aughavas, a group of death just as intimidating as Group One in the Senior grade.

Group Two would appear a much easier and manageable task with the promoted Leitrim Gaels facing a Division 3 team in Glenfarne/Kiltyclogher and a second string team in Mohill so, by all reasonable expectations, Leitrim Gaels, Cloone, Carrigallen and Kiltubrid should make it into the quarter-finals.

All in all, it will make for a championship that is harder to win and if it is harder to win both at Senior and Intermediate level, that will mean clubs will have to work harder, standards will rise and the long term knock-on effects will be huge for our county teams.

So roll on the championship and lets hope for an exciting and thrilling campaign.

And may the best teams win!