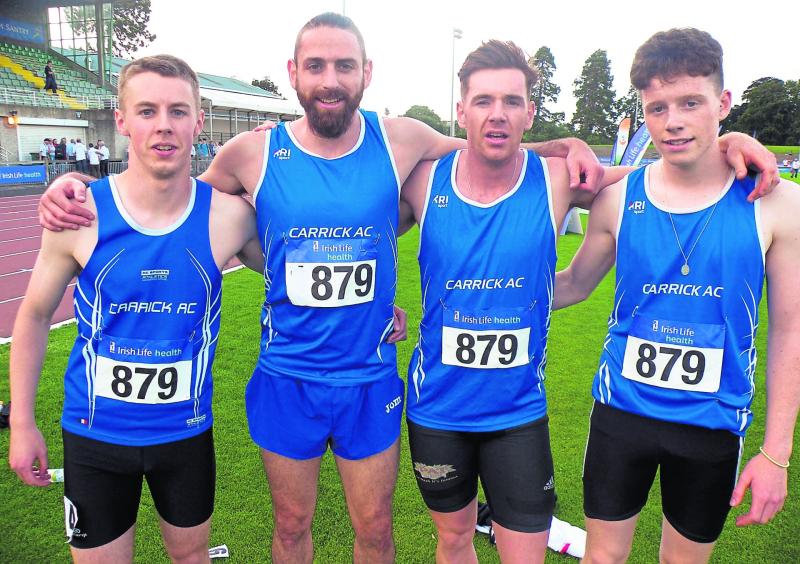 It was a golden weekend for Leitrim’s speed kings Eanna Madden and Gerard O’Donnell as both claimed All-Ireland titles in Morton Stadium last weekend.

The Carrick-on-Shannon AC duo claimed the gold medal in the Irish Life Health Athletics Ireland Senior Track & Field Championships, Madden over 200m and O’Donnell in the 110m Hurdles with Eanna adding a silver in the 100m.

Eanna got the ball rolling on Saturday when the Mohill man successfully defended his 200m crown against Jeremy Phillips in a very competitive race, Eanna running a season’s best of 21.07 to win by just 0.07 of a second. 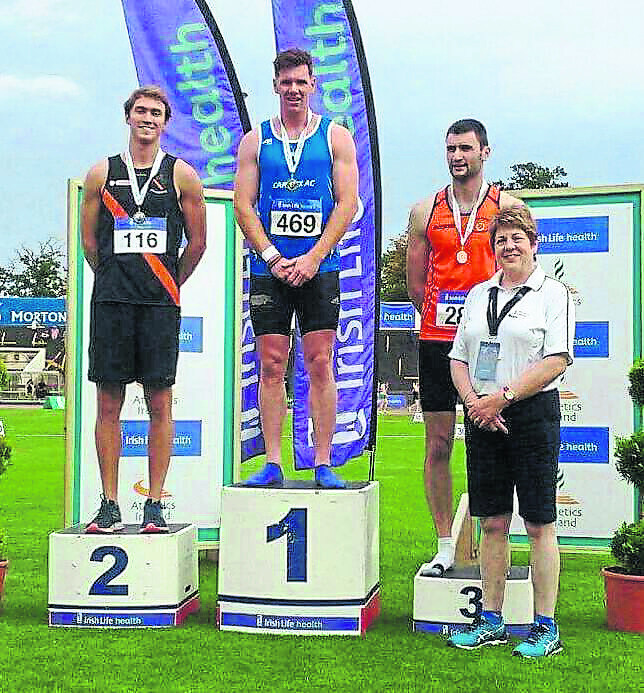 Carrick AC’s Eanna Madden on top of the podium with second placed Jeremy Phillips of Clonliffe Harriers (left) and Robert Bennett of Nenagh Olympic after being presented with their Athletics Ireland 200m medals by Ballinamore’s Patricia Griffin.

The Carrick sprinter got off to a blistering start but with Phillips, a US native who is declaring for Ireland, putting the pressure on up the home straight, Eanna showed great resilience to hold him off and take the title.

A delighted Eanna told RTE Sport that he was thrilled to defend his title - “Tough Final, I knew I was up against it from the heats. Jeremy is new on the scene here, he is from America. I know his personal best is in and around the same time as mine so I knew it would be a battle up the home straight. It wasn’t easy but it is good to get the win and I am delighted.”

On Sunday, it was the turn of Gerard O’Donnell to regain the 110m Hurdles title as he overcame a bad start to defeat rising star Matthew Behan of Crusaders in a season’s best time of 13.94 seconds.
Behan, who just missed out on the European U23 Final, got off to a blistering start but the Carrick native ran a clean race and came storming through over the second half of the race to score a clear cut win. 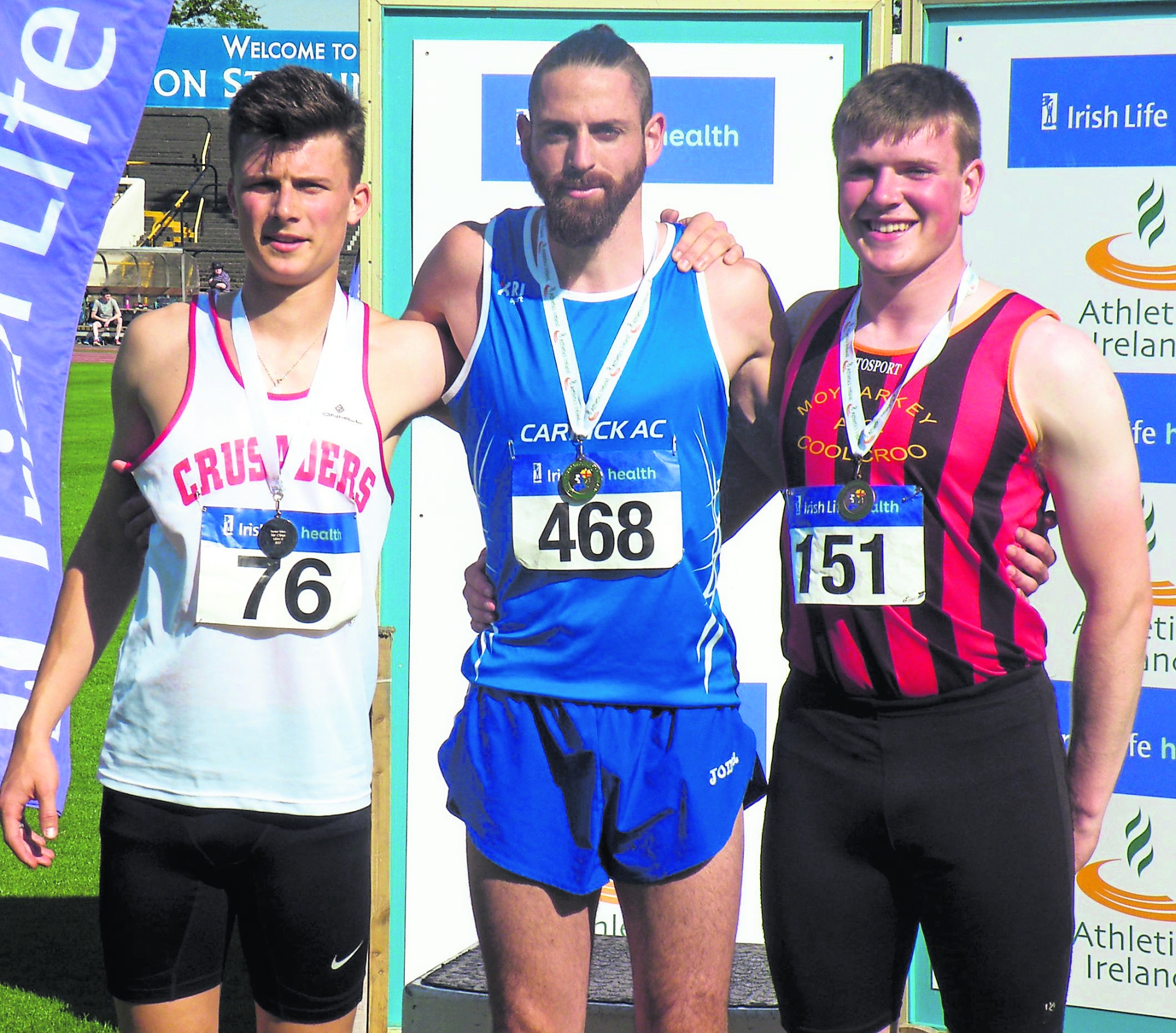 Speaking to Athletics Ireland after the race, Gerard said his intention was to run a smooth race - “Just to keep relaxed, keep smooth for the rest of the race, not mess up any hurdles. I only got back hurdling a couple of weeks.

“I knew I was going to be a bit behind at the start, I had a bit of work to do but things started to come together. I knew I had to keep a calm old head when I got to hurdle five and I would come through.

“He (Matthew Behan) has run quick times this year, he ran well at the European U23 last week, he has a blistering first sixty but I knew my back end of the race is superior to most people on the international field as well as I here so I was happy enough I could come back strongly in the last five hurdles. He got out well but I finished stronger.”

And Gerard paid tribute to his coach Jeremy Lyons and his club for their support - “My coach Jeremy is the main man for the last couple of years, there has been a lot of ups and downs, injuries and everything else and trying to work through all that.

Always special to win a national title. A lot of time & effort from Coach @Jeremy_P_Lyons and great support from Carrick AC along the way pic.twitter.com/GJ5uUVVPR9

“Great support from my club in Carrick-on-Shannon, my Mam, John Connolly and everyone else, my physios. It has been a tough old year for a lot of reasons so I’m just delighted to finish on top.”

Eanna Madden also collected a silver medal from the weekend as he ran a new personal best of 10.62 seconds in the 100m on Sunday, overcoming a poor start to come storming through in the last 30 metres to claim the medal behind Jeremy Phillips.

Jeremy Phillips takes the men's 100 metre title. The last half hour of the live action is on @RTE2 and @RTEPlayer now. #RTESport pic.twitter.com/OEhX0SmnYU

The pair teamed up with clubmates Cathal McElgunn and Fiachra O’Dowd to finish seventh in the 4 x 400m relay on Sunday evening.