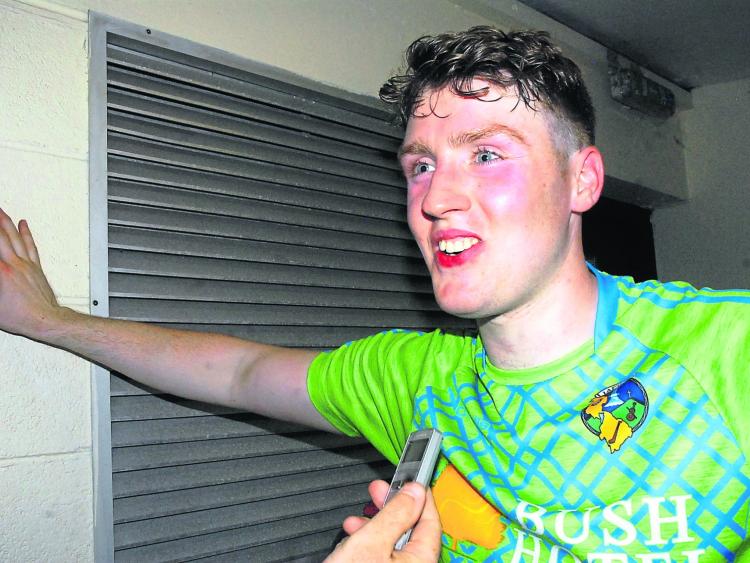 Pride in a battling performance was mixed with frustration over what might have been were the conflicting emotions for captain Alan Armstrong last Saturday.

Leitrim put in a battling and defiant display against red hot favourites Kerry in the Gaelic Grounds in Limerick, losing 1-16 to 1-9, but Alan Armstrong reflected both the pride and frustration in the performance.

“We had a load of missed chances, goal chances and they were big blows especially when we had the momentum,” Alan told the Observer, “When those chances are going amiss, they kinda put you back a bit but in fairness to the lads, they kept driving on again and again.

“I think it probably took us about 10 or 15 minutes to get into the game and to see if we could perform at the same level as Kerry. I think for the last 15 minutes, we had Kerry summed up, they weren’t scoring that much, we had them sized up.

“We brought the intensity and brought the battle to them but they are a good team, they kept the scoreboard ticking over and that will kill any team and that is what happened today.”

The belief of manager Seamus Quinn was a big factor in the performance - “The managers were full time telling from day one against Galway in Carrick-on-Shannon, those boys pick the team and they had the full belief that we could compete with anybody out there and it probably took those two games to win the Final to believe that we can win.”

Alan also paid tribute to the players drafted into the panel in the week before the game - “We had the loss of the players, it was a big blow but when we called in the players, and for us that were on the team already, we knew the players through the club scene and we had every faith and every belief that the boys coming in would be able to do the job and that was the main thing.

“Seamus said that any lad he rang would nearly bite his hand off for the opportunity to come in. At the end of the day, we got to an All-Ireland Semi-Final and it is not every day you get to compete at that level.”

On a personal level, Alan enjoyed the experience of facing Kerry in an All-Ireland Semi-Final - “The whole atmosphere was brilliant but for myself, having never experienced anything like this before, it was a major learning curve and it was just a good day, a good experience.”