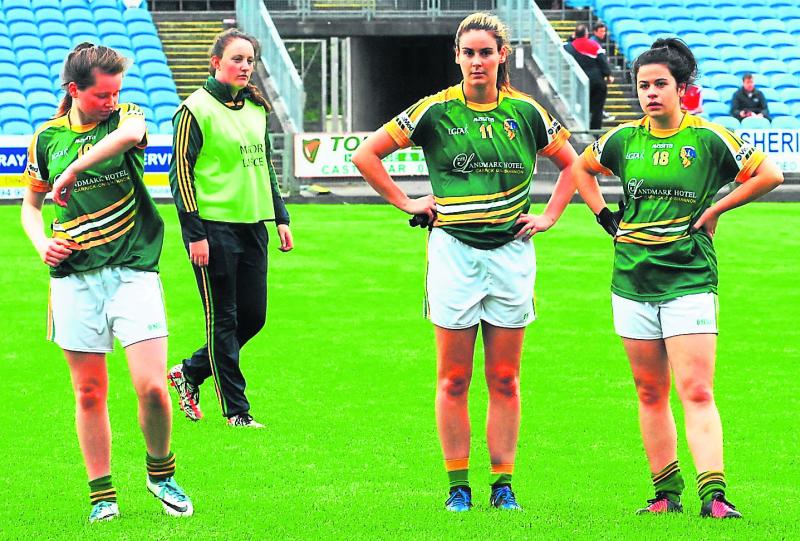 Disappointed Leitrim players Roisin McHugh, Michelle Heslin and Claire Beirne pictured after the Connacht Final defeat to Sligo - they will be hoping to reignite their campaign against Longford.

A chance to get their season back on track is on offer for the Leitrim Ladies next Sunday when they take on neighbours Longford in the TG4 All-Ireland Intermediate Qualifiers.

The clash in Boyle on Sunday (2pm throw-in) will see the winner progress to a Quarter-Final meeting against Ulster champions Tyrone. But most of all, it is a chance for Leitrim to get their campaign back on track.

Leitrim’s Connacht Final loss to Sligo (3-15 to 2-13) was a blow to Leitrim’s preparations but even in the minutes after the defeat, manager Philip Brady was planning ahead as he said “There is still an All-Ireland to be played for and we’ve been talking about that all year.

“We’ll regroup and go through the back door if we have to. It is not what we wanted but an extra game mightn’t do us any harm. Going forward, we are probably in a good position and the disappointment among the group, which is great to see, we would be worse off if they were all happy on the pitch out there.”

His Longford counterpart James Daly, a former manager of the Armagh Senior Ladies team, feels that his team are looking forward to the game as he told the Longford Leader “The best two teams in my opinion in the qualifiers draw were Roscommon and Leitrim.

“We got Leitrim and you just take what you get. The girls are going well at the moment and they are excited about the big game on Sunday.”

Longford’s focus may be more on maintaining their Intermediate status but they are well aware of the threat posed by Leitrim star Aine Tighe - “She is one of the best players in the country but if we play to the best of our ability we can beat them.

“We have some very talented players and we have big game performers. Leitrim have Aine Tighe and we have Michelle Farrell who I think is as good a player as Aine. We have so many good athletes on the team.

“If we can get ourselves set up properly we can beat Leitrim and will then be playing Tyrone in an All-Ireland quarter-final. Let’s hope it works out that way.”

Longford were impressive winners of last year’s All-Ireland Junior crown but have struggled a bit at Intermediate level yet they probably go into the game with a bit more certainty than there is around Leitrim at the moment.

The return of Anna Conlan, one of the more impressive performers in the Connacht Final, was a huge boost but it was offset by the loss of Eilish O’Dowd from the midfield area, the Ballinamore player’s energy around the middle of the park a huge loss.

Doubts surround the involvement of Glencar/Manorhamilton’s Ailbhe Clancy following her selection for the Irish Women’s Soccer team competing in the World University Games later this month, a team that also boasts the skills of Mohill’s Dearbhaile Beirne who has been unavailable for the championship due to her soccer commitments.

But Leitrim will feel that as long as they can get a good supply of ball into Aine Tighe, they will have the upper hand and given the Kiltubrid woman’s form this year, it is a conclusion that is hard to escape and must be the number one tactic for Philip Brady's team next Sunday in Boyle.

The fact that the game is in Boyle is also a major help, the smaller tighter pitch will help a Leitrim defence that has coughed up a lot of scores this year while it is also handy for Leitrim supporters, particularly with so many Men's club games on Sunday morning.

This game will be tighter than many expect but you would still think that the firepower of a full-strength Leitrim will prove too much for their neighbours.