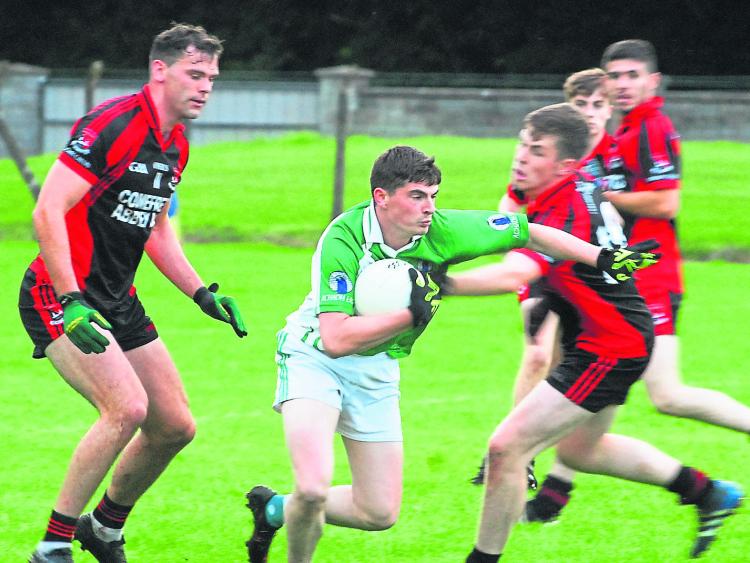 Last year's Junior A Champions were not helped by the 11th minute dismissal of Niall Gallogly but it was doubtful that they would have lived with O'Rourke as the County man claimed a personal tally of 2-8 before Fenagh took him from the action midway through the second half.

O'Rourke was simply unstoppable as nobody in the Aughavas ranks were able to stop him as he was involved in setting up the other two goals and as long as they have a forward of O'Rourke's class, Fenagh will be a serious bet for the Intermediate crown.

It wasn't all a one-man show as Alan Doonan impressed in attack while Donal Wrynn shored up the midfield and defence so much that Aughavas struggle to make any sort of impact.

Aughavas, who lost by just a point against Ballinaglera, were a shadow of that side and while they were missing players and lost Niall Gallogly to a red card, they will be worried by the lack of fight on show and they will need a major improvement to avoid the relegation playoffs.

Aughavas got their first score on 18 minutes with a well worked Trevor Farrelly point but Fenagh killed the game off when a long ball into O’Rourke saw him set up Alan Doonan for an easy goal.
Jack Gilheaney and O’Rourke added points before O’Rourke grabbed his first goal after a run on 26 minutes. Aughavas finished the half with a flourish with two Michael Fitzpatrick points to leave Fenagh 2-6 to 0-3 in front at the halftime break.

Seamus Sweeney converted two early frees for Aughavas but Ryan O’Rourke ensured there would be no fairytale comeback as he struck for two points, Aaron McLoughlin added another before the two point scorers combined to set up Donal Wrynn for an easy palmed goal.

Sean McKiernan hit back with a 40 yard point but an Alan Doonan point and a blasted O’Rourke goal midway through the half left 16 points between the teams.

Michael Fitzpatrick pointed before Ryan O’Rourke hit two quick scores and as the match petered out, Trevor Farrelly got a second score but Fenagh finished with a point apiece from Tony Sims, Jarlath Scollan and Diarmuid McHugh in a facile victory.