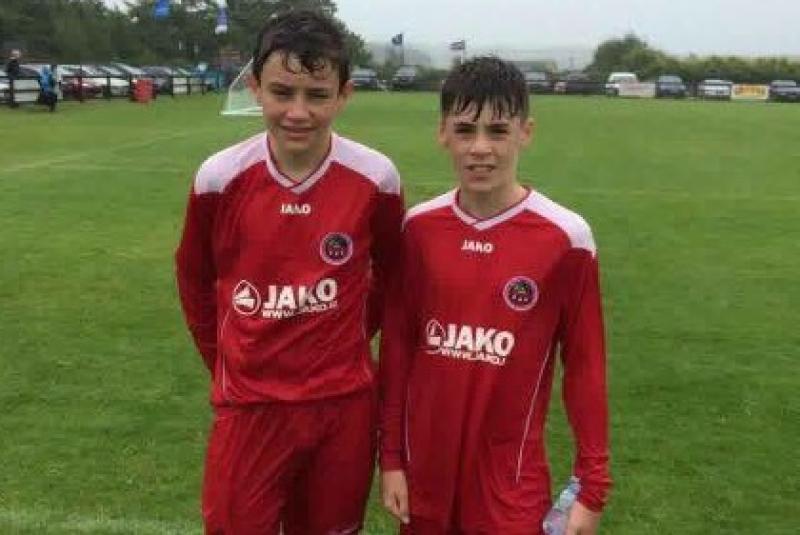 Manor Rangers players Eanna Clancy and Patrick Montgomery both played starring roles for Sligo/Leitrim in the U-14 section of the Galway Cup as they marched to the final of the competition which was played in Drom, Galway on Saturday last.

While the team suffered the pain of a penalty shoot-out defeat in the final there was plenty of positives for the Sligo/Leitrim's youngsters to take from the experience. Four wins en-route to the decider and an impressive showing in the final were enough to help Eanna Clancy claim the player of the tournament award.

Sligo/Leitrim's opening game in the competition was against North Tipperary with Jack McGovern scoring a hat-trick in a 3-1 win.

Next up for Sligo/Leitrim was an encounter with near neighbours Roscommon Bridel Bosakani scoring the only goal of the game in a 1-0 win.

Day two of the competition saw Sligo/Leitrim continue their winning ways as they defeated Donegal 4-1. Jack McGovern scored twice for Sligo/Leitrim while Bridel Bosakani and Josh McNulty were also on target.

Sligo/Leitrim confirmed their place at the top of their group with a 3-1 win over West Cork. A Patrick Montgomery goal and two from Jack McGovern were enough to secure Sligo/Leitrim's place in the final.

Colarado Rapids provided the opposition in the final and after a very closely fought encounter the game finished 1-1 with the Sligo/Leitrim goal scored once again by Bridel Bosakani.

Unfortunately there was to be no fairytale finish as Colarado Rapids triumphed 4-2 on penalties.

Despite the defeat there was some good news from a Sligo/Leitrim point of view as Eanna Clancy was named as the player of the tournament.