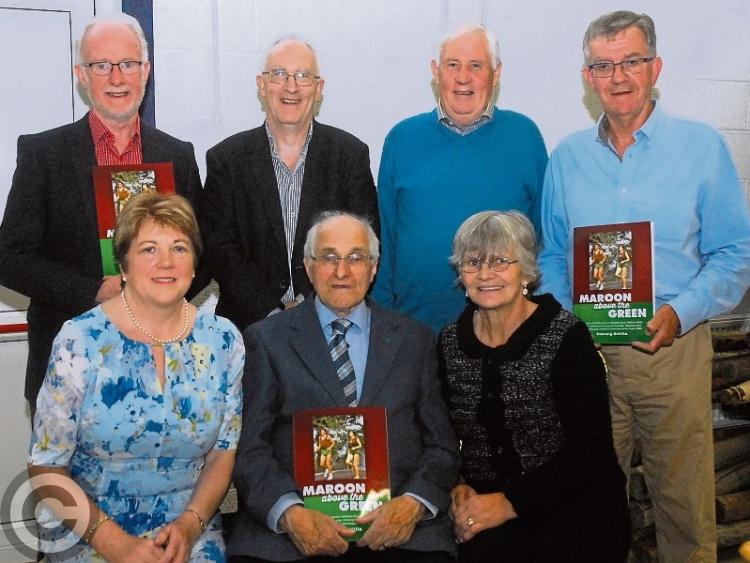 Over 50 years of excellence was on show last Monday evening when Ballinamore Athletic Club launched their fascinating history “Maroon Above the Green”.

Launched by Athletics Ireland President Georgina Drumm, who had travelled straight from the World Championships in London to be present at the event in Ballinamore Scout Hall, “Maroon Above the Green” is an essential read for anyone with a connection in any way to Ballinamore Athletic Club down through the years.

Charting the development of the sport of athletics in Leitrim from long before the foundation of Ballinamore AC, “Maroon Above the Green” contains a wealth of information and photos from the past six decades.

Authored by club founder Padraig Griffin, “Maroon Above the Green” tells the story of a small Leitrim club who have nevertheless produced two two-time Olympians in Eddie Leddy and Colin Griffin and countless other national medal winners in every discipline in the athletics field.

Athletics Ireland President Georgina Drumm said “I was delighted to get the invitation to launch Maroon Above Green but when I got it, I didn’t realise it would be the day after yesterday if you know what I mean.

“I have just spent the last two weeks in London attending conferences and the World Championships which were the most tremendous celebration of athletics, a great display of spirit and heart for where we feel our sport should be.

“Congratulations to Padraig on this publication, the amount of details in that book is probably in his head. This book is a tremendous work of art and passion for our sport, a passion that we all have.

“From looking through the book, the same names keep popping up, the Leddy and the Griffin family and the Griffins themselves have Patricia who was a member of the first Irish team to beat England while Colin also competed with such distinction as a two time Olympian.

“I am extremely fortunate to be here tonight and I think this event shows that we haven’t lost the people who built these clubs. This history is there for all of us and if we don’t remember and celebrate the past, we won’t have the future.”

Padraig Griffin said the title of the book came from the club’s first purchase of vests from UCG and the adopted colours of green short as he reminisced on the history of the club, recalling many names of those who had helped build the club into what it is today.

“A number of clubs have produced books and there was the question of a catchy title and what to put in the book to avoid a disjointed narrative of achievements down through the years. I wanted to make the book readable and not just an account of races, results and performances.

“Names come through and pass on to the next down through the years and I hope people find the book useful and that it is interesting to a reader not directly involved in athletics. This club has had some involvement in six Olympics from 1972 and I hope you all find the book useful and that it adds something to the collection of literature we have in athletics.”

Leitrim Athletics Board Chairman John Connolly congratulated Ballinamore AC on their fantastic history and paid tribute to them for the leading role they have played in the development of the sport in the county down through the years.

l The photographic & memorabilia exhibition, featuring photos and programmes from the very earliest days of Ballinamore AC, that so captivated the audience on Monday will be open to the public this Friday evening, August 18, in Ballinamore Scout hall during the Ballinamore AC Festival Road Races from 7 pm to 10 pm.

Copies of “Maroon Above the Green” are on sale locally at a price of €10.

To complete a very busy week for Ballinamore AC, the Club host their annual Festival Road Races this Friday evening, August 18, with 10Km and 5 Km races as well as a number of underage races in the grounds of St. Felim's College. Full details on page 68.