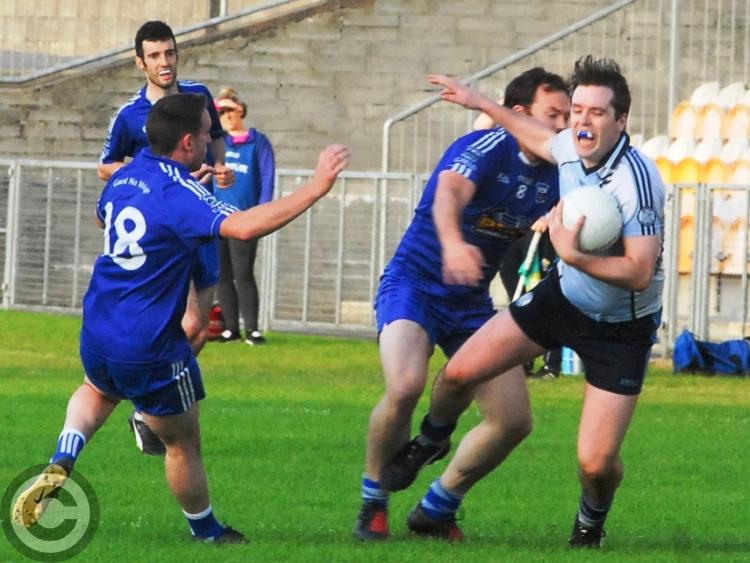 Allen Gaels may be without a win but they gave Melvin Gaels a real scare in Saturday's Group One clash in Pairc Sean Mac Diarmada.

The Kinlough Gaels had been leading comfortably when the  winless Allen Gaels side reduced the deficit  to just four points by the 57th minute.

Melvin Gaels always held the upper-hand in this clash but Allen Gaels' second half surge certainly provided some food for thought for the Kinlough side.

Melvin Gaels started brightly and went 1-2 to 0-0 up before Allen Gaels opened their account in the 12th minute. James Bredin and Darragh Rooney shot over Melvin Gaels first two points and then Rooney, after evading the close attention of his marker, blasted to the Drumshanbo net.

Martin Beirne steadied Allen Gaels nerves when he popped over his side's first score from a free. But Matthew Cleary increased the Gaels advantage when he found the range from a 15th minute free.

A Martin Rafferty point  two minutes later kept his side in the hunt. Paul McGurran made sure that Melvin Gaels controlled the show when he hit over a well-taken 22 minute point after some good build-up play.

Five minutes later, James Bredin was the recipient of yellow card after he fouled James Flynn while he was kicking the ball. As well as the yellow card, Melvin Gaels were further punished when Seamus Mulhern ruled the free should be taken from where Flynn's kick landed and it was duly converted by Martin Beirne.

Just before the break Conor Sheridan answered for Melvin Gaels with a point from play that put his side in front by 1-5 to 0-3 at the halfway stage.

After the restart, Melvin Gaels increased their advantage to eight points in the opening 12 minutes of the second half. In this spell the Kinlough men added two points courtesy of Darragh Rooney, one of which was a goal chance that he put inches over the crossbar, while Conor Sheridan also chipped in with a Melvin Gaels point.

Melvin Gaels had a let off when a Shane Walsh 44th minute Allen Gaels pile driver came back off the bottom side of the Melvin Gaels crossbar and was cleared by an alert defender.

Two minutes later James Flynn answered with a point while Melvin Gaels sub Jessie McGuinness was issued with a 55th minute yellow card following a foul at midfield on an Allen Gaels player.

Two minutes later another Melvin Gaels player Cathal McSharry saw yellow also after he fouled James Flynn. From the resulting free on Flynn, Martin Beirne split the Melvin Gaels uprights from the placed ball and closed the gap on his opponents to four points.

However, this proved to be Allen Gaels' last score in the contest and in the remaining minutes of action Melvin Gaels pulled decisively clear after Darragh Rooney put over two points (one from a free) while before that sub Stephen Clancy also added a point while Darragh Rooney also received a yellow card in this period.

Main Man: Despite being 'double teamed' for most of the clash, Darragh Rooney was the game's top player and his performance over the hour ensured that Melvin Gaels were victorious.

Talking Point: There was a lull in intensity in the Melvin Gaels performance at different stages which suggests the Kinlough side was having quite a bit of difficulty in coping with the Allen Games game plan. This could perhaps be a problem for Melvin Gaels further down the championship road.

Turning Point: The goal that Darragh Rooney shot in the game's 10th minute was undoubtedly the score that put Melvin Gaels on the road to their second championship win.

Ref Watch: Seamus Mulhern kept the game flowing and made a number of good calls that penalised players who were guilty of hits after the ball was played. Mulhern also used his linesmen and umpires effectively.

Highlight: Ciarán Walsh's 46th minute goal was the game's best worked and executed score. It came from a fast break from the midfield area and produced several quick accurate passes near the Melvin Gaels goals.

Lowlight: Allen Gaels  let themselves drop out of contention in the  third quarter by failing to score, leaving them  play catch-up with the result that a win for them was a now bridge too far.