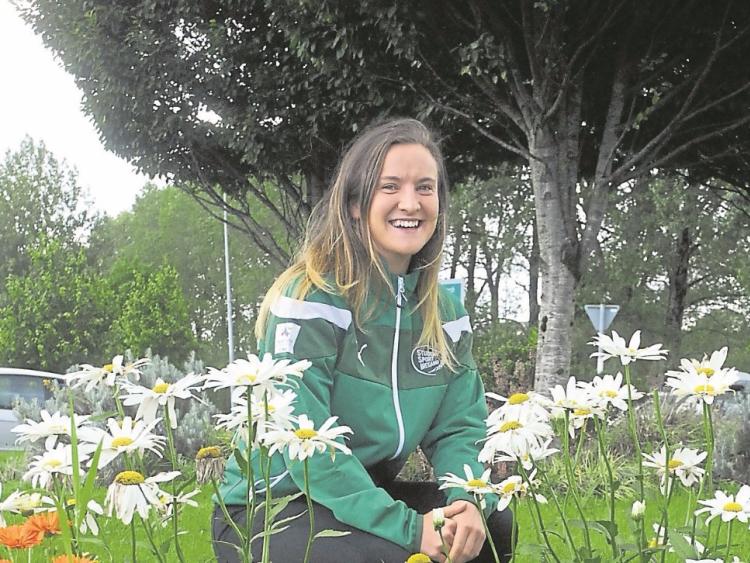 Glenfarne's Ailbhe Clancy will fly the flag for Leitrim and Ireland at the World University Games in Taiwan. Photo by Willie Donnellan

By the time you read this interview, Glenfarne’s Ailbhe Clancy will already be on the trip of a lifetime as she takes part in the World University Games in Taiwan as a member of the Irish Ladies Soccer team.

Better known in Leitrim sporting circles for her prowess on the gaelic football field, the young Glenfarne sportswoman is making a splash on the international stage as she lines out with the Irish Ladies University side against the world’s best in Taiwan.

Ireland began their campaign with a 0-0 draw with Mexico this morning, Friday with Ailbhe was an unused substitue and they will face Canada on Sunday. Speaking before her departure for Taiwan Ailbhe acknowledged it is a challenge that she is very much embracing.

The game against Mexico was streamed lived and can be rewatched below.

“Yeah I am looking forward to it, it should be a great experience,” Ailbhe told the Observer before she flew out to Taiwan, “In our group, we play Mexico first on the 18th and then Canada on the 20th and depending on how those games go, we find out who we are playing after that.

“I’m down as a midfielder in the 20-person squad but you play wherever you’re asked. Midfield is more my preference, I would prefer centre-midfield but wherever they ask you play, if they ask you to play centre-back, you play centre-back. I’m really looking forward to flying out there and just getting down to work.”

And there is no mistaking the ambition of the Leitrim dual star to excel against the world’s best - “It is a three team group, I think it could be the top two to qualify but we are guaranteed to have games after that. But we’re going out there to win, we’re not going over there for a holiday.”

Of course, any discussion about Women’s soccer internationally usually references the powerhouse that is the USA but Ailbhe admits the competition is something of a wildcard scenario with the changing availability of players in the university system adding a bit of intrigue to the finals.

“There isn’t really much of a ranking system so it is kind of difficult to tell because University teams change so often, they can be different teams during the year.

“Ladies soccer in America is really big, it is lot bigger than Men’s soccer over there and there is a lot of money put into it so they will definitely be a tough team to face but we are going to go over there, work hard and definitely try to win.”

Ailbhe knew quite early in the summer that she would be travelling to Asia but had to keep the news secret until the team was officially announced in late July - “We had trials in May and in June. I found out in June, a few months ago but I had to keep it quiet basically.

“I told my parents and family obviously but I told nobody else but word kind of gets around as well. There was a bit of excitement, there was a good reaction in Glenfarne.

Fellow Leitrim star Dearbhaile Beirne was due to take part but was cruelly ruled out due to illness in the last couple of weeks but Ailbhe felt that the Leitrim duo had proved the county could take on the best.

“It is great and it doesn’t matter that people kind of look down on Leitrim or something. I’m a couple of years older than Dearbhaile but we would have played underage together.”

“I was playing while I was in school, then I played with a team in Sligo but definitely I am thinking about next year joining another club. I’ve been training with Galway the last few years just to get back to the soccer again and they have a National League team.”

Of course as great as the honour of playing for Ireland is, the trip comes right in the middle of Leitrim’s All-Ireland Intermediate Championship campaign and Ailbhe, who scored 2-2 in the victory over Longford, will miss next Sunday’s Quarter-Final clash with Tyrone.

And Ailbhe admits that balancing the two sports is tough - “It can be hard at times, sometimes one game might take a hit but I’m just going to take it as it comes, work hard at both and once I come home, I’ll be focussed on the gaelic football and hopefully when I come home, we will be in the semi-final.

“Obviously, we would like to win a few more games, get to Croke Park and win the final and then we would be happy. Leitrim manager Philip Brady was very understanding, he congratulated me and knew it was a great opportunity, he wasn’t going to try and make me stay.”

Asked to pick a favourite between the two sports, Ailbhe laughs as she replies “Don’t ask me that, I can’t answer that question.”

As for the future, Ailbhe pays tribute to DCU where she studies in helping her accommodate her dual ambitions - “I’m going into my final year, I will have a lot on my plate next year. It is going to be difficult to choose between the two going into final year but the soccer can be very accommodating.
“Gaelic football is very big in DCU so it would definitely be very hard to choose.”