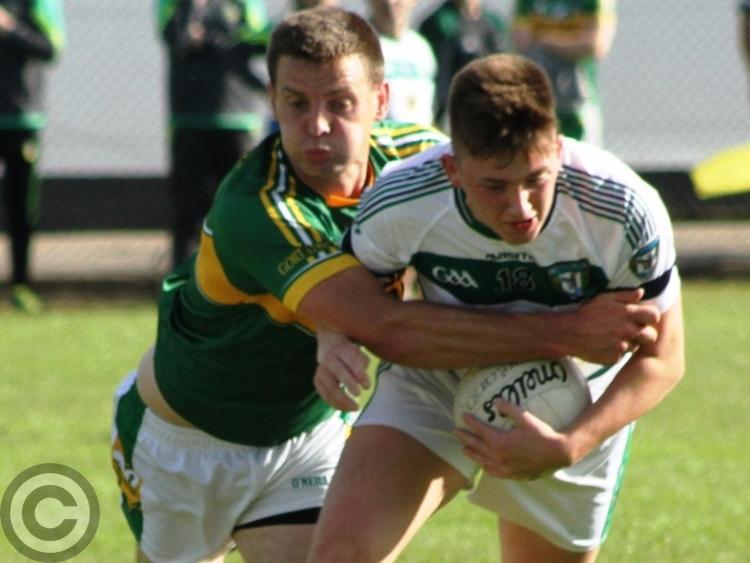 Mohill's Ronan Gordon is tackled by a Gortletteragh defender. Photo by Therese Foy

An obstinate Gortletteragh may have put in an improved showing and Mohill may have under-performed but the League champions still booked their place in the quarter-finals with ease.

Gortletteragh had suffered a calamitous defeat against Ballinamore just a week previously and it looked bad for them as they started without Cathal McCrann, Niall Woods, Conan Clarke and Francie Flynn.

But in adversity, Gortletteragh rediscovered their spirit as they battled like demons against their neighbours and were even left cursing some bad wides from placed balls.

Yet in all truth, this was a game where Mohill cruised. They took no risks by resting Shane Quinn, Oisin Madden & Ciaran Kennedy and  it was obvious that they weren't moving with the same intensity that has marked previous outings.

But despite all that, they never looked as if they would be caught and such is their strength in depth that their second team even went on to defeat Kiltubrid in the game immediately after the win over Gortletteragh.

But Gortletteragh will take a lot from this game and showed a lot of spirit. Now when it comes to winning matches, they may need to be more adventurous but there were some small signs of life.

Mohill looked as if they would be on their way to a big win when Keith Beirne pointed a free on two minutes. Jack Heslin and Ronan Kennedy swapped wides before Heslin put over a free on five minutes.

Unfortunately, the game was to follow the pattern of wides after that with Heslin missing one and Keith Keegan, Alan McLoughlin and Beirne all missing the target.

Mohill had seven wides to just two for Gortletteragh but they also have a lovely point from Alan McLoughlin and the score of the match from Ronan Kennedy when he beat two men to a long Beirne free, spun and fired over in style.

Alan McLoughlin finished off a long passing move with a long range score, leaving them an underwhelming 0-5 to 0-1 in front at halftime. And Mohill started where they left off with a Keith Beirne wide, the County man making amends with a fine point a minute later.

Patient play from the Mohill men ended with Ronan Kennedy firing over a lovely effort before Gortletteragh had their most profitable phase of play with two points in the space of a minute, Jack Heslin punishing a foul on James Campbell from a  free while John Reynolds burst into space to fire over.

Three more Mohill wides followed before Keith Beirne and Colm Duffy swapped frees  as the game descended into a slow paced, error ridden encounter. Jack Heslin was unlucky with a fisted effort from a poor fifty before Beirne hit another free on 17 minutes.

Jack Heslin scored a nice effort from play, which was matched by a good score from Domhnaill Flynn before Keith Beirne brought his evening’s work to a finish with a seventh point, his sixth from a free.

Gortletteragh raised a late gallop with a Jack Heslin free while John Reynolds saw a shot cleared off the line after James Campbell had a close range effort blocked.

Main Man: Keith Beirne's freetaking was always going to be crucial in a game where Gortletteragh condensed the space for Mohill to operate in. From general play, Caillin Canning, Alan McLoughlin, Ronan Gallagher all stood out as did Colm Duffy, John Reynolds and James Campbell for Gortletteragh.

Talking Point: Did Gortletteragh point the way for others to defeat Mohill? The 13 men back behind the ball clearly frustrated Mohill but it has to be said also that it was a pretty lacklustre display from the League champions

Turning Point: No real talking point as such as Gortletteragh sought to avoid the hammering they took against Ballinamore and set up accordingly, restricting a free-flowing Mohill from producing anything near their best.

Highlight: In a game characterised by caution and close marking, one Ronan Kennedy point where he caught the ball surrounded by two defenders, made space and spun to score stood out as a moment of rare class.

Lowlight: The shooting accuracy and intensity was not what you would expect from a championship meeting between these great rivals, perhaps more a reflection of where an understrength Gortletteragh are right now.