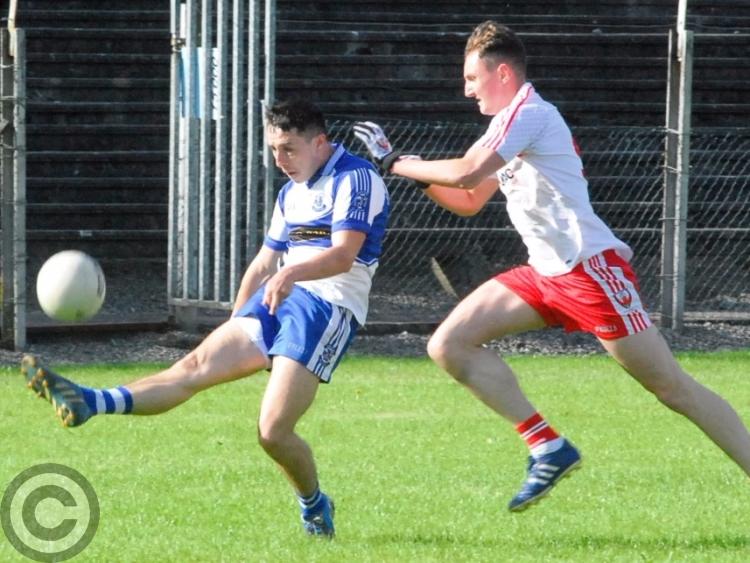 Jack De Lacey gets his shot away. Photo by Willie Donnellan

St. Mary's, who only had to play at their ease, handed out a 23 point drubbing to Dromahair in a totally one sided Group Two clash in Páirc Seán on Saturday evening.

Dromahair, who have lost a number of their leading players in past few years through their transfers to clubs in other counties due to employment reasons, have suffered three very heavy championships defeats so far and at this stage and their survival in the Leitrim senior championship for next year's campaign is seriously under threat.

St. Mary's were so much on top in Saturday's game from start to finish that it was a cakewalk for them. Nevertheless St. Mary's, who have several fine players in their ranks, as well as a strong bench, are sure to be in contention at the business end of this year's race in the Leitrim championship.

The St. Mary's rout of Dromahair began in the second minute when Robbie Lowe fired in a shot that Dromahair keeper Jack Burke parried but the rebound came to Alan Doherty, who quickly dispatched the ball to the net.

Robbie Lowe added a St. Mary's point two minutes later while shortly afterwards Brian O'Donnell was on hand to dispatch a ball that came off the upright to the net. O'Donnell then tapped over a 6th minute free to put his side into a 2-2 to 0-0 lead at this early stage in the game.

The St. Mary's bombardment of the Dromahair posts continued relentlessly as they went on to extend their lead to 3-11 to 0-0 over the next 22 minutes. Brian O’Donnell added his second goal as well as four points (three frees) while Alan Doherty shot three points (two frees) with Nicholas McWeeney and Robbie Lowe chipping in with a point apiece.

James Clancy raised Dromahair's only flag of the half when he put over a point before the break, which left St. Mary's leading by 3-11 to 0-1 at half time.

Alan Doherty increased St. Mary's advantage when he shot over from play within 30 seconds of the restart.

But St. Mary's, who had more or less emptied their bench at this stage, continued to overwhelm Dromahair and increased their lead over the next ten minutes with four more unanswered points from Robbie Lowe (3) and Alan Doherty.

In response Dromahair struck for their only goal of the game when Robbie Cunningham got on the end of a long ball into the St. Mary's 'square' and from a metre out slotted it past keeper Conor Glancy.

Before the end St. Mary's sub, Daire Farrell and David Tiernan added their names to the scoresheet when they whipped over a point apiece while Robbie Cunningham had the last say in the scoring action of the game when he hit over a late Dromahair point.

Main Man: St. Mary's had many contenders but Brian O'Donnell has to head the list in this category.

Talking Point: The game showed how imbalanced and uncompetitive the Leitrim Senior club championship is this year. One high ranking GAA official has suggested to me that the two groups of six teams each has proved to be a disaster and, from what I hear, this is a widespread view.

Turning Point: When Alan Doherty fired St. Mary's ahead from a rebound after Dromahair keeper Jack Burke had bravely parried a Robbie Lowe pile driver, the north Leitrim side's challenge was smashed for the rest of the encounter.

Ref Watch: Kevin Mallon kept a strict but fair rein on the proceedings and had little to do as the game turned into a non-event.

Highlight: Robbie Lowe's relentless industry from start to finish was an aspect of the game that sticks out in the mind.

Lowlight: Everyone in the attendance of about 50 could not wait for the final whistle to be sounded and for the agony to end.