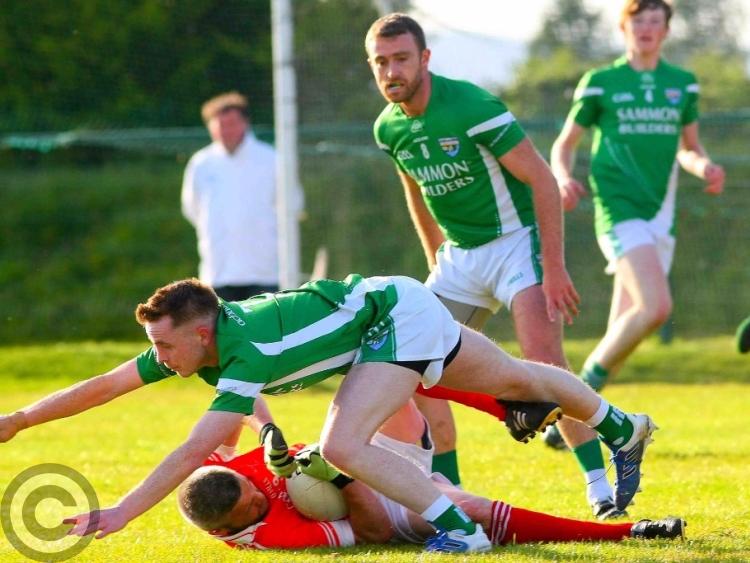 Balancing Act - action from the meeting of Aughnasheelin & Ballinaglera. Photo by James Molloy

It was a close fought encounter, no effort spared from either side and in the end, a draw was probably a fair result. It was a game that always looked like it may end in a draw, with the sides level on nine occasions over the course of the game.

Aughnasheelin hit the front for the first time  when Fitzpatrick hit two points, one from a free.  McMorrow and Fergal Early exchanged pointed frees before Seamus McGovern and another McMorrow free edged Ballinaglera in front again.

Fintan Fitzpatrick levelled matters in injury time with a free, to send the teams in level at the break, the fifth time the teams were level in the opening half.  But what a start we had to the second half. Cullen won the throw in, passed to Fitzpatrick, took the return and within half a minute of the restart, had buried the ball past Conor O’Brien in the goals to give Aughnasheelin a goal advantage.

But Ballinaglera held their nerve, and within ten minutes had taken the lead, hitting four points without reply. Anton McGourty hit two from play, Fergal Wynne another and a McMorrow free left the game wide open again.

Cullen levelled matters with a fine point after a pass from Barry McWeeney. McMorrow and Fitzpatrick again exchanged points, both teams were reduced to 14 players within five minutes of each other, Paul Earley of Aughnasheelin and Ryan Crawford of Ballinaglera, both on second yellow offences.

Fitzpatrick had a chance to put his team ahead but his free came back off the post and was cleared but they did take the lead minutes later when Barry McWeeney put them ahead with a fine point.

With the game entering injury time, it looked like Aughnasheelin might hold out, but when a high ball was fisted to the net by Wayne Reynolds, it suddenly changed the course of the game, Ballinaglera now two ahead.

Seamie McMorrow received a black card but his team mates were unable to hold on for the win with Barry McWeeney holding his nerve to hit over two points to level matters and in the process, gain a vital point for both sides.

A draw was a fair result, Aughnasheelin  a step closer to qualification but may be a little aggrieved that in such a close game, every score is vital and they will look back at what looked a genuine point which was waved wide by the umpires in the opening half.

Ballinaglera needed something from this game, they now stand on three points but face two tough matches against Fenagh St Caillin's and Drumkeerin.