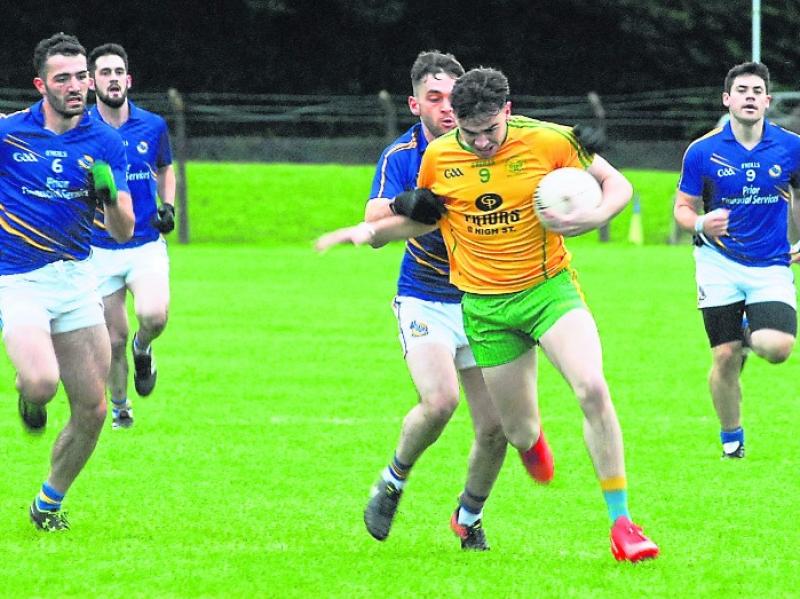 Ballinamore's Dean McGovern is pursued by four Aughawillan players during their Senior Championship match in Cloone. Photo by Willie Donnellan.

A blistering opening half from Ballinamore saw them take control of the game and they led by 11 points at the break.

However, the Aughawillan players mounted a spirited comeback after the break and had reduced the deficit to five points before Keelan McHugh scored Ballinamore’s third goal to all but ensure victory.

The game began with Ballinamore looking to assert their dominance in midfield and the kickout strategy of going long to the dominant figures of Shane Moran and Dean McGovern paid dividends.

Within five minutes of the opening throw-in Ballinamore raced into a three point lead with frees converted by Shane McWeeney and Niall McGovern before Donal Feely pointed from play.

After a horribly slow start Aughawillan tried to fight their way back into contention but were let down by a succession of poor wides. When they did manage to shoot with more accuracy Ballinamore goalkeeper Philip Farrelly was off his line very quickly to deny Stephen Gilheany after good approach play involving Sean Quinn and Noel Plunkett.

Those misses were to haunt Aughawillan as a quick counter-attack led to a fine Paddy Connaughton point and in the 11th minute Niall McGovern found the Aughawillan goal with an unstoppable shot following Shane McWeeney’s pass.

Aughawillan hit back with pointed frees from Morgan Quinn and Ciaran Gilheany but even though there was only a quarter of the game played it was looking like a long way back for the defending champions.

A monster point from Wayne McKeon, 45 metres from goal and nearly on the touchline, brought a roar of approval from the Ballinamore support and their lead was extended to seven when blood substitute Peter Reynolds converted a free.

With six minutes remaining in the half the McGovern brothers combined brilliantly to create Ballinamore’s second goal. Dean’s wonderful pass found his brother Niall and he then lofted a dangerous ball in the direction of the Aughawillan goal. The first to react was Paddy Connaughton who deflected the ball to the net with an outstretched fist.

The McGovern brothers were proving very difficult to curtail during the opening half and a further point apiece from Dean and Niall meant Aughawillan enjoyed a commanding 2-8 to 0-3 interval lead.

Straight from the throw-in there was a look of determination about Aughawillan that wasn’t quite there in the opening half. Five unanswered points within 10 minutes of the second half getting underway suggested the game wasn't the formality it had seemed previously.

Pointed frees from Ciaran Gilheany and Morgan Quinn were followed by points from Sean Flanagan, Sean Fox and Barry Prior.

Ballinamore hit back with a Shane Moran point but shortly afterwards the county player’s interest in proceedings was brought to an end when he was shown a black card.

Ciaran Gilheany hit back with another Aughawillan point and with a little over 10 minutes remaining they came agonisingly close to scoring a goal but Oisin McCaffrey was on hand to make an excellent goal line intervention.

Barry Prior then scored his second point of the game after good, positive play from Chris Prior. Although they still trailed by five points Aughawillan were now dominant in midfield with Sean Quinn and Sean Flanagan proving to be very effective and the possibility of a comeback was significantly greater than it had been at half-time.

However, any hopes Aughawillan may have had of recording a win over their fiercest rivals received a huge blow when Keelan McHugh struck for Ballinamore’s third goal with eight minutes left. A goalmouth scramble ultimately saw the ball dispatched to the net from close range.

That score knocked the wind from the Aughawillan sails with Ciaran Gilheany’s pointed free doing little to get Aughawillan back in contention.

Wayne McKeon put the gloss on a fine win with an excellent score before Aughawillan replied with consolation points from Stephen Gilheany and Gary Plunkett but this was Ballinamore’s day and Barry McGovern was on hand to score the final point of the game for the victors.

Main Man: Aughawillan's Barry Prior returned from injury with a fine performance while Sean Fox and Sean Flanagan both had big second half performances. For Ballinamore Shane Moran, Wayne McKeon, Philip Farrelly and Niall McGovern were influential with Dean McGovern just edging them all with an excellent all round performance.

Talking Point: The clash of the intermediate and senior champions promised an absorbing encounter and it didn't disappoint. Ballinamore with three wins are sitting pretty at the top of group 1 while Aughawillan with two defeats so far, know they still have a lot to do to ensure a quarter final place.

Turning Point: Aughawillan will point to their wayward shooting in the first half as a deciding factor while Ballinamore will reflect on Keelan McHugh's goal as the match winning moment.

Ref Watch: Black cards for Shane Moran and Ciaran Gilheany were the main issues for Eamon O'Grady to deal with it.

Highlight: Wayne McKeon put the gloss on a fine win when he chipped the ball into his hands while running at full pace. That skill was matched by a wonderful point from distance.

Lowlight: Aughawillan will be very disappointed with their opening 30 minutes but in terms of entertainment there were few complaints with regards what was on offer.