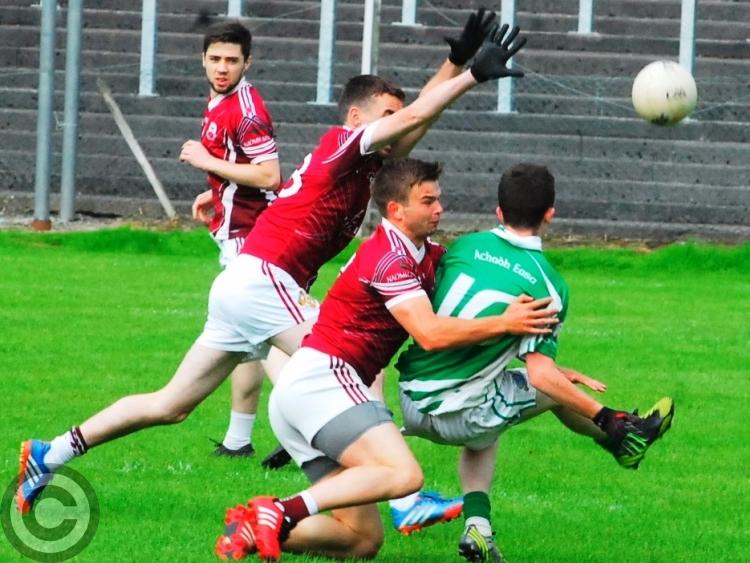 A goal  by man-of-the-match Colm Clarke midway through the second half proved to be the score that set up Drumkeerin for their first Group One win on Sunday.

The game had been evenly balanced  but after Clarke's golden goal, Drumkeerin claimed supremacy and went on to win with relative assurance by the end.

Trevor Farrelly denied a Edward McTiernan a goal just 25 seconds into the action when he deflected the shot out for a '45.' Seamus Sweeney opened the scoring when he put over a 6th minute 13 metre free.

Drumkeerin levelled three minutes later when Cathal McCauley whipped over a point but Michael Fitzpatrick edged Aughavas back in front when he split the posts with a 13th minute shot.

In response two minutes later, Darragh Flynn popped over a Drumkeerin free. The tit-for-tat  continued when  Michael Fitzpatrick shot over for Aughavas after receiving a pass from Niall Maguire.

Aughavas keeper Ross Williams made a good save when he parried a 20th minute Colm Clarke pile driver while the rebound from Williams's stop was put inches wide by Cathal McCauley. Over the next five minutes Aughavas stretched their lead after Aidan Maguire and Seamus Sweeney converted a free each.

In response James Gallagher (Corry) initiated a Drumkeerin rally that got his side back on level terms by the 29th minute. Gallagher, Edward McTiernan (free) and  McCauley fired over a point each.

Before the break, Colm Clarke hit over a  point from close range that put his side into a 0-6 to 0-5 interval lead. Edward McTiernan was black carded in the opening minute of the second half for a foul on Seamus Sweeney.

A minute later Sweeney levelled matters for a fourth time in the game when he shot an Aughavas point. Before the 40th minute the game was back in stalemate twice more after Colm Clarke and Darragh Flynn for Drumkeerin traded points with Aughavas' Fintan McBrien and Eoin Kenny.

Three minutes later it all came right for Drumkeerin when Cathal McCauley put Colm Clarke through on goal to fire to the Aughavas net.

McCauley put Drumkeerin four ahead  when he shot a 48th point. Before the end Cathal McCauley and Aidan Maguire traded points .