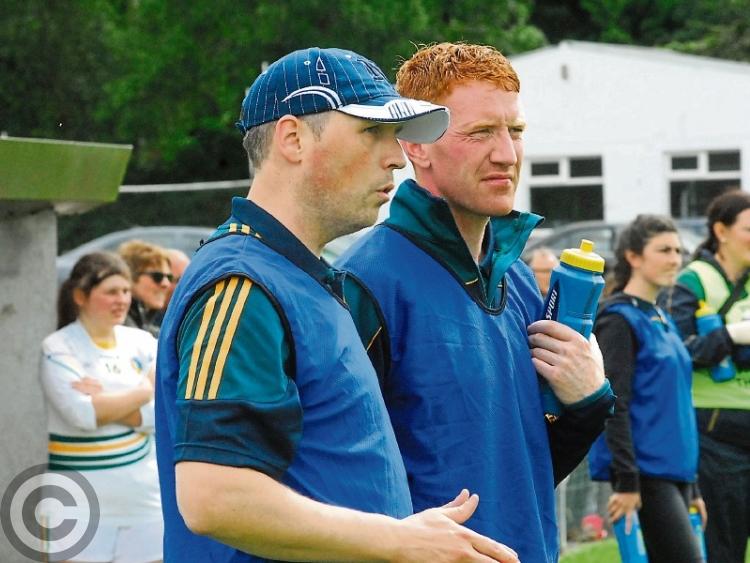 Ladies manager Philip Brady with selector and Carrigallen player Darren Reilly on the sideline during the Longford All-Ireland Qualifier in Boyle. Photo by Willie Donnellan

Leitrim are at full-strength, peaking at the right time and raring to go as they aim to shock Ulster Champions Tyrone in Sunday’s TG4 All-Ireland Ladies Intermediate Championship Quarter-Final.

That’s according to manager Philip Brady who believes that the Green & Gold Ladies have a wonderful chance to shock the favourites in Pairc Sean Mac Diarmada and his team is eagerly looking forward to Sunday’s clash.

“Preparations are going very well, we have everyone available that we can count on,” said Philip, “We’re missing Ailbhe Clancy, she is gone to Taiwan with the Irish Universities team but other than that, we are in good shape.

“We’re very happy with the way things have gone the last couple of weeks, it is nice to be there, no injury worries. I think other years, Leitrim Ladies may have hit their peak form too soon and we are coming good at just the right time.”

But Philip is not underestimating the challenge posed by Tyrone in any way - “Tyrone ares good, you have to look at any county that has contested an All-Ireland Senior Final in the last couple of years and they still have a few players from that team playing.

“Tyrone are never bad at any level. I’ve seen them a number of times over the last couple of years playing Cavan, they are a good side, they are very physical and have a good manager over them.

“They are going to be hard beaten, the quality of players they have, you don’t get to an All-Ireland Senior Final and depreciate that much in a few years. They are going to be very difficult to beat, I think they are one of the favourites for the championship.”

But again, Philip's confidence in his own players comes shining through - “It is a huge game for us and it is something we have been looking forward to all year and we’ve been improving all year for it.”

Looking back on the win over Longford, Philip believes the game took on a life of its own - “It was basically all out attack from both teams, sometimes games go like that, it is not too often, you just can’t stop the scores going in - you just have to go with the flow and keep going.

“We talked at halftime, we changed things around and we slowed their scoring. The second half we tightened up a bit, they had only four points scored up until the last couple of minutes when they scored three or four more. Obviously 20 points to any management isn’t great. If we can just get that bit tighter at the back, we won’t be too far away.”

As for a verdict, Philip wants a performance from both players and management - “I’m always confident, we have a great bunch of girls, Leitrim have some fantastic footballers and while most managers build up other teams, we don’t have to build them up.

“We are good enough if Leitrim play to their potential and if we get our tactics right along the line, I am very confident that we can come out and perform. We just have to go and see what happens.”

The Ulster women will start as favourites and rightly so as Tyrone have easily vanquished all before them in Ulster and were comfortably mid-table in the Division 2 League. But you have to wonder if the standard of the Ulster championship is that high and Leitrim may be more battle hardened.

Philip Brady's rallying cry for supporters and no major club games on this weekend may bring out fans, although a clash with the Kerry v Mayo game won't help.

If Leitrim can tighten up in defence and get the ball to Aine Tighe, there is always a chance of an upset next Sunday.