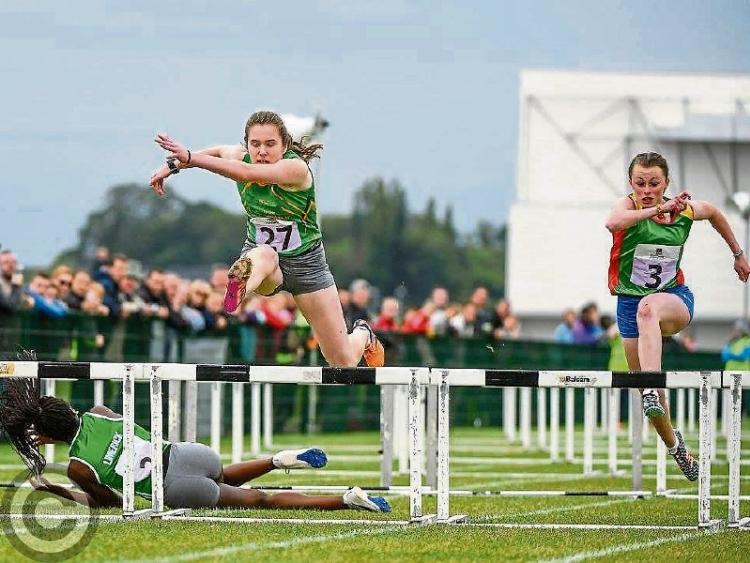 Ella McDaid clears the final hurdle on her way to claiming gold in the Aldi National Community Games u14 80m Hurdles Final in Dublin last Sunday.

Dromahair's Ella McDaid smashed the field to win the U14 Girls Hurdles on the grass track at the National Sports Campus in Abbotstown on Sunday.

And Leitrim's incredible record in U10 Gaelic Football in recent years saw Carrick-on-Shannon Area bring the title back to the county for the third time in six years following on victories for Ballinamore and Carrick.

The Ladies were not found wanting as Manorhamilton Area claimed a bronze medal in the U12 Girls competition while there were individual medals for Toyosi Fagbo, Diarmuid Giblin and Luca McDaid along with a number of finalists in the sprint events on Sunday.

In the cultural arena, Drumshanbo Area dancers claimed gold in the U12 Irish Group Dance Contemporary competition and Carrick-on-Shannon took home a bronze in the U16 event.

And there were further medals on the track for Carrick's Toyosi Fagbo in the U14 100m, Manorhamilton's Diarmuid Giblin in the U14 Hurdles while Drumshanbo's Luca McDaid won a fourth place medal in the U10 Model Making, making it a very successful weekend for Leitrim Community Games.