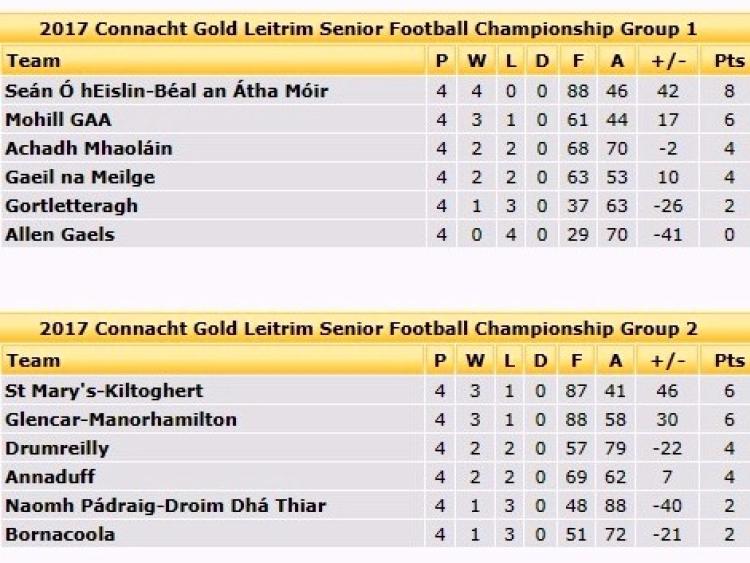 There was also an incredibly important first win for St. Patrick’s Dromahair, a 2-11 to 0-14 win over Bornacoola that leaves four teams fighting for two places in the quarter-finals next weekend.

The big game of the weekend took place in Cloone as the only unbeaten teams left in the competition, Ballinamore Sean O’Heslin’s and Mohill, put their record on the line and it was the Ballinamore men who settled quickest as they charged into a 0-8 to 0-2 lead after just 15 minutes.

With Niall McGovern leading the charge, O’Heslin’s were in complete control but Ronan Kennedy clawed Mohill back into the game with a series of excellent points, although he was guilty of blasting a gilt edged goal chance over the bar.

Trailing 0-9 to 0-9 at halftime, the key score came 13 minutes into the second half when Wayne McKeon’s free came back off the post and Man of the Man Niall McGovern was on hand to blast to the net from close range.

Mohill kept battling and created at least two great chances wide as Ballinamore made a big statement with a fine victory.

Champions Aughawillan made a statement of their own with a 2-18 to 2-14 victory over Melvin Gaels in Pairc Sean Mac Diarmada. The teams were deadlocked at 1-9 apiece at halftime but the Champions opened up a three point lead before Melvin Gaels had a player receive a straight red card.

Aughawillan struck soon after for a second goal to lead 2-16 to 1-11 but the Kinlough men staged a late recovery and cut the gap back to two points with three minutes left. However, the champions hit two late scores to secure the victory.

Results in Group 2 have changed the playoff picture considerably as Annaduff beat St. Mary’s 1-16 to 2-10 and Dromahair had three points to spare over Bornacoola. Add in Glencar/Manorhamilton’s destruction of Drumreilly and it leaves the group up for grabs.

Despite their loss, St. Mary’s and Glencar/Manorhamilton are into the quarter-finals. Annaduff led 1-8 to 0-7 at halftime, the goal coming from Eoin Gill in the eighth minute as Sean McNabola was causing havoc in the Carrick rearguard. The second half saw a transformation as two long balls into James McGrail saw the former County star twice palm the ball into the net.

That turned a four point gap into a two point lead for St. Mary’s but Annaduff were not to be denied as McNabola and Ray Cox hit five points between them and Dillon Keane struck two marvellous long range efforts to seal the win.

The game ended with some controversy as referee Brendan Sammon waved away what looked like legitimate St. Mary’s calls for a penalty in injury time but there was no doubting that Annaduff were more than worthy winners.

In Ballinamore, goals from Robbie Cunningham and James Clancy helped Dromahair secure a first win of the campaign, 2-11 to 0-14. Both teams had a player sent off in the first half, Michael McKeon for Dromahair and County star Damian Moran for Bornacoola.

It was a stunning loss for Bornacoola who had seemed to be in the driving seat for a quarter-final place after their victory over Glencar/Manorhamilton in the last round and it gives Annaduff a big advantage as they take on Dromahair in the last game.

In the Fox Monumentals Intermediate Championship, Fenagh St. Caillin’s and Aughnasheelin both secured their quarter-finals berths in different manners. Aughnasheelin had to come from behind to see off an unlucky Aughavas, 0-14 to 1-9 while Fenagh were well in control against Ballinaglera, the north Leitrim side scoring two injury time goals to scare the unbeaten Fenagh men.

Drumkeerin took a major step to qualifying when they demolished Eslin 4-23 to 0-9 which leaves the group still up for grabs.

There was a dispiriting news in Group 2 as Glenfarne/Kiltyclogher conceded their game against Mohill, giving Mohill a second win and increasing the pressure on Kiltubrid who are now two points behind them. 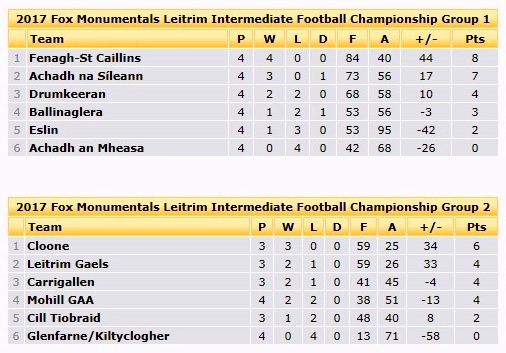