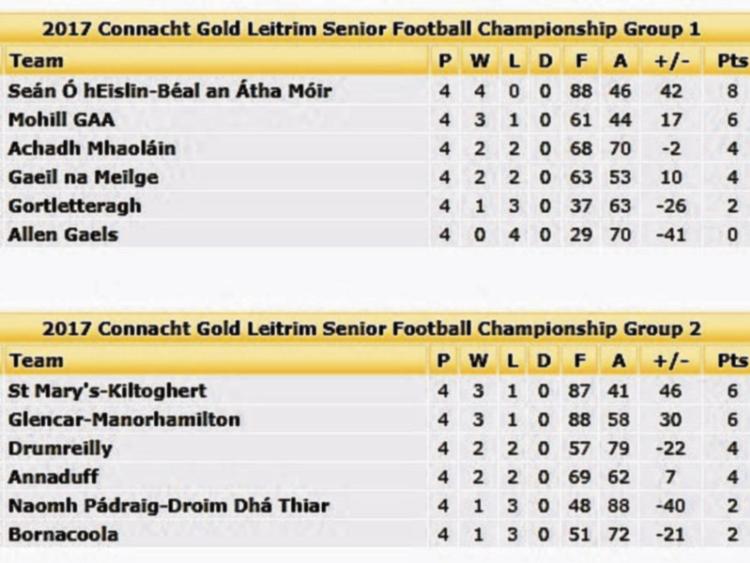 We're finally down to the last round of Group games in the Connacht Gold Senior Championship and seven teams still have a chance to book a quarter-final spot.

Ballinamore Sean O'Heslin's, Mohill, St. Mary's Kiltoghert and Glencar/Manorhamilton have all booked their places in the quarter-finals but there is plenty of intrigue going into the last round this Saturday.

In Group One, Aughawillan & Melvin Gaels appear to have one foot in the quarter-finals but defeat for both could leave the door open for Gortletteragh who need to defeat the reigning champions to avoid the Relegation Semi-Finals.

In Group 2, the supposedly weaker section, four teams can still grab the last two places and while Drumreilly and Annaduff are in the driving seat, they both face Bornacoola and St. Patrick's Dromahair and a win for the bottom two could mean it comes down to scoring difference next Saturday evening.

There won't be any need, however, for a draw for the quarter-finals as the top placed team in one group faces the bottom team in the other so there is still something to play for, even for those already qualified.

Momentum is often the great factor in these things so does momentum rest now with Annaduff and Dromahair in Group 2 while both Aughawillan and Gortletteragh scored important wins.

Gortletteragh will give it their all but you get the feeling that Aughawillan took stock of a tough group, decided what games they absolutely had to win and managed their injuries and resources accordingly. It is hard to see anything other than an Aughawillan win.

Group 2 is more of a barnyard fight right now - the loser of Drumreilly v Bornacoola and Annaduff v Dromahair could be relegated so the tension is sure to be high in both those games.

Dromahair looked a mess for their first three games but then performed more like their old self when shocking Bornacoola so are they hitting form at just the right time? And they have nothing to lose so Annaduff, so impressive against St. Mary's, have to watch out.

Certainly there are reasons to be wary as Annaduff lost games to Drumreilly and Glencar/Manor they feel they should have won so dealing with the pressure should be the first order of business.

The loss of Damian Moran after a straight red last Saturday could derail Bornacoola's hopes but a straight red for Michael McGirl will leave Drumreilly without a first choice keeper. This could be a bruising, old fashioned knockdown encounter and it will take a moment of class to win.

It is not with any great conviction but tentative votes for Annaduff and Drumreilly to show their steel and qualify for the quarter-finals.