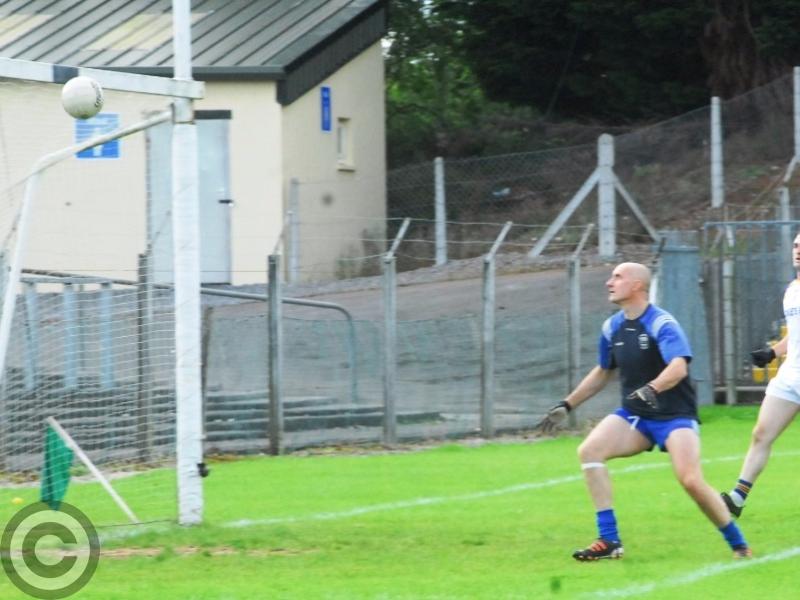 Melvin Gaels' Gareth Phelan can only watch as the ball enters his net. Photo by Willie Donnellan

It was a clash with a lot of danger for an injury stricken Aughawillan but the Champions showed that class is permanent as they overwhelmed Melvin Gaels last Saturday.

Going into the contest, Aughawillan were incredibly staring into the abyss of a relegation playoff if they lost to the Kinlough men but they answered any doubts about their championship form with a hard fought win.

What must please the Aughawillan camp most is the way they pushed on in the second half, having been tied at 1-9 apiece at the halftime interval. The dismissal of Melvin Gaels Kevin McGloin was a boost but the champions were already in control at that stage.

Indeed, they went 2-14 to 1-11 ahead and even though Melvin Gaels showed they would not lie down either by reducing the gap back to just two points, the Champions scored their second win of the group stages with two late points.

Nobody will want to face the Champions in the knockout stages and one of the top two teams in Group 2 may yet get a booby prize of an Aughawillan team further down the table than many people expected.

Melvin Gaels will take something from the game as well and the manner in which they fought back after the loss of McGloin will no doubt please manager Liam Gilmartin and certainly suggests that a new look and young Kinlough side is going to be a serious force in the years ahead.

Certainly the impressive Darragh Rooney continues to burnish his reputation and the speedy Cillian McGloin weighed in with three points. But the ability of several Aughawillan players to score big obviously proved the difference with four players scoring more than McGloin and another five on the scoresheet.

The Gaels can, in theory, be denied a place in the quarter-finals if they suffer a heavy defeat against Ballinamore Sean O’Heslin’s next weekend, Aughawillan lose and Gortletteragh win but it would take a massive point swing and you would still expect the champions to overcome Gortletteragh.

The first half was a tense affair where both teams had their moments on top - Aughawillan seemed to take early control when former County star Barry Prior found the net and current Leitrim player Gary Plunkett and Hurling star Morgan Quinn were also on target.

But Melvin Gaels weren’t in deficit for long and yet another goal from the inspirational Darragh Rooney got them back on level terms for halftime, the young Leitrim star going on to score 1-6 over the hour.

The second half remained tit for tat early on but Aughawillan started to stretch away with Gary Plunkett and Morgan Quinn leading the way and the game seemed to have gone from Melvin Gaels when Kevin McGloin was red carded for a tackle on Barry Prior.

Prior eventually had to go off and, in a move that illustrates just how much Aughawillan are battling against the odds, Prior was replaced by Morgan Quinn who had gone off five minutes early.

Incredibly that proved to be a master stroke as Morgan then scored Aughawillan’s second goal to stretch the lead to seven points with less than ten minutes to go, the game seemingly dead and buried.

But Melvin Gaels refused to lie down and showing great resilience, a goal from Peter McGowan reignited their challenge and had the Kinlough men flying again, a point from Cillian McGloin reducing the deficit back to two points.

But showing all their experience, Aughawillan saw out the game with a late point from Michael Prior securing a four point win.