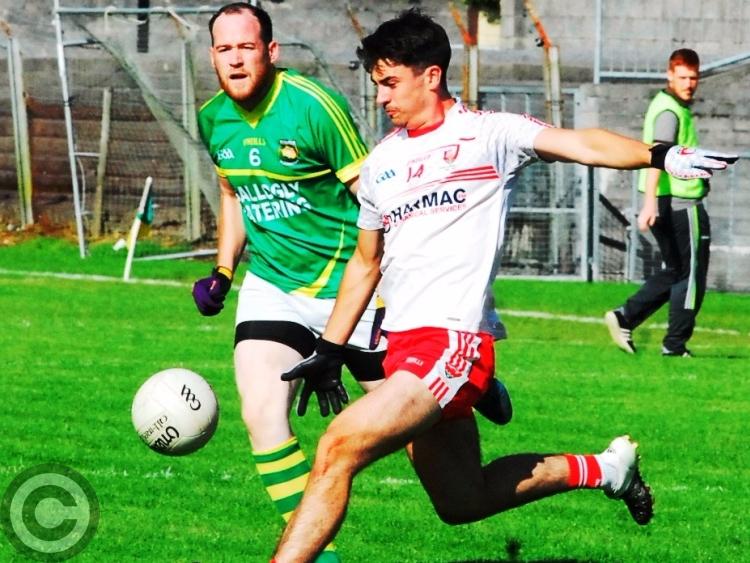 With the threat of relegation looming large, Dromahair produced their best display of this year’s Connacht Championship to give their chances of avoiding a relegation play-off a significant boost while at the same time putting a considerable dent in Bornacoola’s chances of reaching the last eight.

Fresh from their win over Glencar/Manorhamilton in the previous round of games confidence in the Bornacoola camp would have been high as they faced a Dromahair team who were well beaten in all three of their opening group games.

Bornacoola would have been hoping to assert themselves on the game as early as possible and capitalise on frailties in the Dromahair defence. A Damien Moran pointed free inside the opening minute provided Bornacoola with the  fast start they were looking for.

To their credit there was a resolve about Dromahair that suggested if they were to be beaten, Bornacoola would have to work very hard to earn a victory. Two Cian Clinton frees gave Dromahair a slender advantage with the game still under five minutes old.

In a game that was  keenly contested, the opening 10 minutes weren’t particularly memorable as the game was littered with fouls and no clear pattern emerging.

Two Damien Moran pointed frees edged Bornacoola back in front with the county man proving to be a real handful for Dromahair’s Michael McKeon.

The sixth point of the game proved to be the first from play with Philip Howard’s point followed by further scores from Allan Croghan and Damien Moran to open a 0-6 to 0-2 lead after 16 minutes.

Dromahair needed a spark of magic to reignite their challenge and they almost received just that moments later. Cian Clinton’s excellent diagonal pass released Gary Fowley into acres of space. Fowley raced clear on goal with Robbie Cunningham in a more central position waiting for a pass.

Fowley opted to go himself and struck a powerful shot that seemed destined for the goal but he was unlucky to see his shot crash off the crossbar before bouncing on the goal line and eventually cleared by the Bornacoola defence.

It would perhaps have been understandable if a few Dromahair heads dropped but to their credit they responded with two fine points from Cian Clinton’s trusted left boot.

Damien Moran replied with an excellent point for Bornacoola before Philip Howard struck once more to re-establish a four point lead with six minutes of the half remaining.

Bornacoola appeared to be in control as the game edged towards half-time but with five minutes of the half remaining Dromahair struck for a decisive goal.

A minute later the sides were level when Kyle Harte pointed.

With nothing to separate the sides, there was a pivotal moment with just a minute of the half remaining. Referee James McCaffrey had little option but to issue red cards to Dromahair's Michael McKeon and Bornacoola's Damien Moran after punches were exchanged by both players.

Bornacoola were to suffer much more as a result of their numerical disadvantage as Moran had been causing the Dromahair defence all manner of problems and in injury time Dromahair took the lead courtesy of a Cian Clinton point after clever approach play involving Darragh McMorrow and Robbie Cunningham.

Leading 1-6 to 0-8 as the second half got underway Dromahair edged further in front when Robbie Cunningham converted a free after a foul on Cian Clinton but three further chances to extend that lead resulted in no more than three wides.

The next score didn't arrive until 13 minutes into the second half when Robbie Cunningham converted another free to leave a goal between the sides but to their credit Bornacoola refused to throw in the towel and hit back with a Sean McKeon point after excellent work from Ollie Vaughan who then pointed himself to leave just one between the sides.

James Clancy and Conor McCauley then exchanged points before Dromahair struck for a decisive second goal, finished by Robbie Cunningham after a precision pass from Gary Fowley.

A Philip Howard pointed free was cancelled out by a  Robbie Cunningham free to leave Dromahair four clear with a minute to go.

Shane Conroy and Sean McKeon points reduced the deficit to two but deep in injury time Dromahair sealed their first win with another James Clancy point.

Main Man: Damien Moran was in contention before his interest in the game came to a premature end. For Dromahair Cian Clinton led by example while the attacking trio of Gary Fowley, James Clancy and Robbie Cunningham were excellent but the importance of the roles played by Bertie Cunningham as a sweeper and  Declan Fowley at centre-back shouldn't be underestimated.

Talking Point: It has proved to be a very unpredictable Championship to date with Dromahair recording their first win of the year over a team who had already defeated Glencar/Manorhamilton.

Turning Point: The double sending off in the final minute of the first half was undoubtedly more costly for Bornacoola who struggled without the presence of Damien Moran.

Ref Watch: Some of the decisions or non-decisions made by James McCaffrey drew howls of frustration from both sides but there were no arguments with either red card.

Highlight: Dromahair's second goal was clinical in its execution. Kyle Harte played an excellent ball down the line to Gary Fowley who delivered a pinpoint delivery to full-forward Robbie Cunningham who then applied the finish the move deserved.

Lowlight: Bornacoola will be bitterly disappointed they were unable to follow up from their excellent win over Glencar/Manorhamilton. Failing to score for the first 14 minutes of the second half illustrates how much they misses Damien Moran.