Annaduff back in the quarter-final as McNabola leads the way 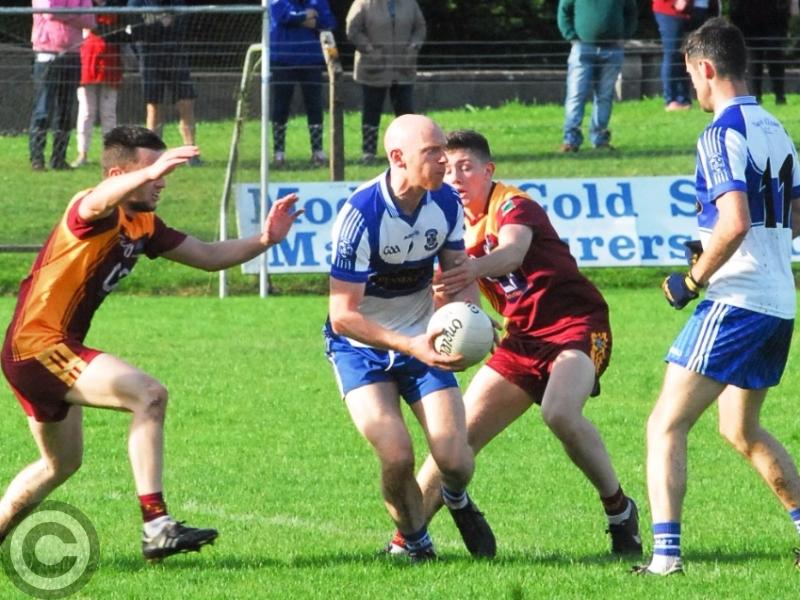 Annaduff dramatically put themselves in line for the quarter-finals as they dramatically ended St. Mary's unbeaten run in Cloone last Saturday evening.

A flat looking St. Mary's simply couldn't match the hunger and work-rate of an Annaduff side who dominated long periods of this encounter but struggled to really make it count on the scoreboard.

After two missed chances, St. Mary’s opened the scoring on two minutes when Ray Mulvey shot over, Brendan Sammon over-ruling his umpires. Kenny Cox fired over after a lovely  move but Barry Butler, raiding from defence, replied on seven minutes.

The game took a major change on eight minutes when Mattie Cox’s shot long range was deflected and hit the crossbar, the rebound falling right to Eoin Gill who blasted to the net from close range.

The rest of the half was tit for tat with Annaduff dominating but St. Mary’s managing to stay in touch - Ray Mulvey and Gavin O'Brien swapped points as did Nicholas McWeeney and Alan Glancy. Alan Doherty scored an excellent point on 15 minutes but two Sean McNabola frees edged Annaduff three in front.

Good work from Nicholas McWeeney set up Doherty for a point but Sean McNabola fired over a marvellous huge point on 24 minutes and Annaduff took control as Ray Mulvey shot badly wide and McNabola added another free.

Micheal McWeeney scored a good point after his pass rebounded back to him off an Annaduff defender but McNabola had the last word in the half with a massive free that almost ended up in the net when keeper Conor Glancy misjudged the ball in the sun, the ball bouncing over the bar.

Annaduff led 1-8 to 0-7 at halftime but the lead was cut dramatically on two minutes when James McGrail fisted a high Ray Mulvey into the net, ball, keeper and defender ending up in the net to ignite the Carrick challenge.

Annaduff responded with a Sean McNabola free but St. Mary’s seemed on fire, Ray Mulvey playing a one-two before pointing before, four minutes into the half, McGrail repeated his goal heroics as he got his hand to a high ball from Alan Doherty.

A stunned Annaduff responded well with Ray Cox finishing off a patient move a minute later but Brian O’Donnell set up Mulvey for another excellent point as St. Mary’s then had two missed chances.

Annaduff steadied themselves with Ray Cox leading the way with two points in three minutes, two fabulous points - one on the run and the other from the corner - before Daniel Lowe responded with a brilliant effort of his own on 13 minutes.

Annaduff should have had a goal but Ray Cox blasted wide but they drew level when McNabola converted yet another free on 18 minutes.

Momentum was now with Annaduff and they sought a penalty when Conor Glancy had trouble dealing with a Conor Reynolds shot, Alan Glancy following in and clashing with the keeper as both scrambled for the ball.

Both teams had wides but Annaduff started to translate their outfield dominance into scores when McNabola scored a great free from the corner on 23 minutes. Seconds later, Dillon Keane broke through a tackle and fired over an inspirational point from distance as Annaduff were flying.

And Keane repeated the dose when patient play saw Annaduff worked the ball in and out in the corner before playing out and finding the wing back on the run, Keane scoring a fabulous point to put his team three clear with less than four minutes to play.

Eoin Gill missed a chance to make the game safe and St. Mary’s went looking for a third goal but Annaduff seemed to be holding out easily until a high free was boomed in towards the twin towers of James McGrail and Daniel Lowe.

The ball broke off  and fell right into the hands of Alan Doherty who seemed to be taken down from behind but referee Brendan Sammon waved away appeals and Annaduff held on for a deserved victory.

Main Man: No contest this one as Sean McNabola hit eight points, seven from frees and was a real leader for Annaduff. Conor Reynolds, Dillon Keane, Mattie Cox, Dermot Reynolds and Ray Cox all stood out while James McGrail, James Glancy, Daniel Lowe and Nicholas McWeeney stood out for St. Mary's.

Talking Point: Sean McNabola's influence was immense as St. Mary's did not score once from a placed ball while the Annaduff man hit the target from frees seven times. It was the winning of the game.

Turning Point: Eoin Gill's goal eight minutes in came early but it gave Annaduff the belief they needed and they seized the opportunity.

Ref Watch: Brendan Sammon ended the game with controversy as both teams felt they should have had a penalty. The Annaduff incident with Alan Glancy was borderline but could easily have been given. The injury time decision not to award a penalty on what looked like a clear foul on Alan Doherty was controversial and incensed the St. Mary's players and fans.

Highlight: James McGrail's two goals were a textbook illustration of how to use a big man on the edge of the square as the former county man put ball and two players in the net with his power in the air.

Lowlight: Some poor shooting from both sides bedeviled this encounter but there wasn't really too much to complain about although the pace of the game was very different to what followed after.