All too easy as Glencar/Manorhamilton get back on track 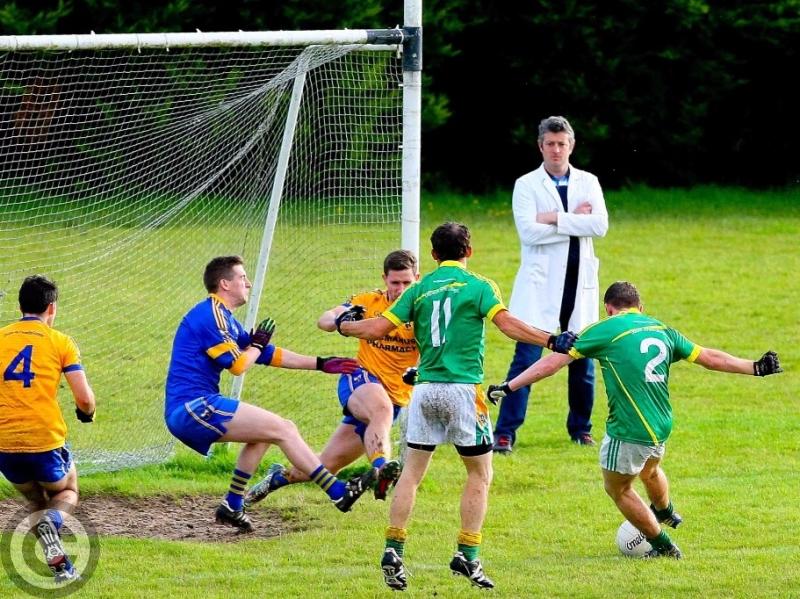 Anthony Holohan drives the ball to the Glencar/Manor net. Photo by James Molloy

After suffering a surprise defeat at the hands of Bornacoola, Glencar/Manor bounced back to record a runaway 17 point win over Drumreilly last Saturday.

Apart from the opening minutes, Glencar/Manor totally outplayed Drumreilly over the hour but the Drumreilly cause was not helped when keeper, Mick McGirl received a 14th minute straight red card.

Drumreilly won an early free and Conor Gaffney opened the game's scoring with a free some 45 seconds into the action. But Glencar/Manor levelled  shortly after when Niall Brady whipped over a point.

When Evan Sweeney blazed a fourth minute goal chance inches wide he allowed Drumreilly to have an early let off.  A Brian McDonald point four minutes later put Manor into a lead they never let go of for the rest of the contest.

Glencar/Manor raced into a 1-7 to 0-1 lead by the 19th minute as Adrian Croal struck for the  first goal, which he flicked to the net while Evan Sweeney hit over three points with Aaron Hickey and Darren Sweeney getting a point each.

Drumreilly were reduced to 14 players when 'keeper Mick McGirl received a straight red card for foul on Croal as he  finished the ball to the net.

James Holohan answered Manor's barrage with a 20th minute point. But Manor increased their lead further over the next four minutes with an unanswered 1-2, Niall Brady finishing the ball to the net while Adrian Croal fisted and kicked over a point.

Before the break Peter Prior converted a 45 and Conor Gaffney tapped over a free while Evan Sweeney replied with a free to leave Glencar/ Manor 2-10 to 0-4 ahead at half-time.

Glencar/Manor keeper Anthony McDonald pulled off two saves from Declan Maxwell and Peter Prior goal chances in the opening minute of the second half. Manor increased their lead to 15 points after Croal, Brian McDonald and James Glancy put over a point each.

Drumreilly raised a cheer when Anthony Holohan drove a 37th minute shot past keeper McDonald after a Conor Gaffney shot rebounded off  the upright.

Within the space of another minute Francis Holohan answered this score with a goal from close range when Holohan burst past two Glencar/Manor defenders before burying the ball in the net.

The North Leitrim side surged again when hitting over 0 – 5 without reply by the 50th minute. In this period Adrian Croal hit over three points for Glencar/Manor, one of which was a goal chance that he blazed over, while Niall Brady and Brian McDonald added a point apiece.

Drumreilly sub keeper Niall Gallogly denied Brian McDonald a 52nd minute goal with a timely save. Over the next four minutes two points by Peter Prior (one from a free) and one by James Holohan slightly reduced Manor's massive lead.

In the final minutes of the action, Evan Sweeney fired home a late Glencar/Manor goal and added a point while sub Ronan Flynn also pointed for the winners.

Main Man: Adrian Croal proved to be the engine of Glencar/Manor win. His determined running at the Drumreilly defence caused them many problems.

Talking Point: Glencar/Manor's win was clear-cut. Drumreilly, despite their brave efforts, were outclassed from early on. The north Leitrim side will take some comfort from an improvement in their performance but they know that much stiffer tests await them as the championship continues.

Ref Watch: Cyril McKeon handled the game efficiently and effectively. He had no option but to issue a straight red card to fellow ref and Drumreilly keeper Mick McGirl after his rush of blood to the head.

Highlight: Peter Prior's '45' conversion for Drumreilly prior to half-time was perhaps the best executed score in the game.

Lowlight: Slightly more than 50 spectators attended the game which was a disappointing turnout to say the least. For the loyal supporters that did travel to Drumshanbo the contest proved to be a very one sided affair from early on.