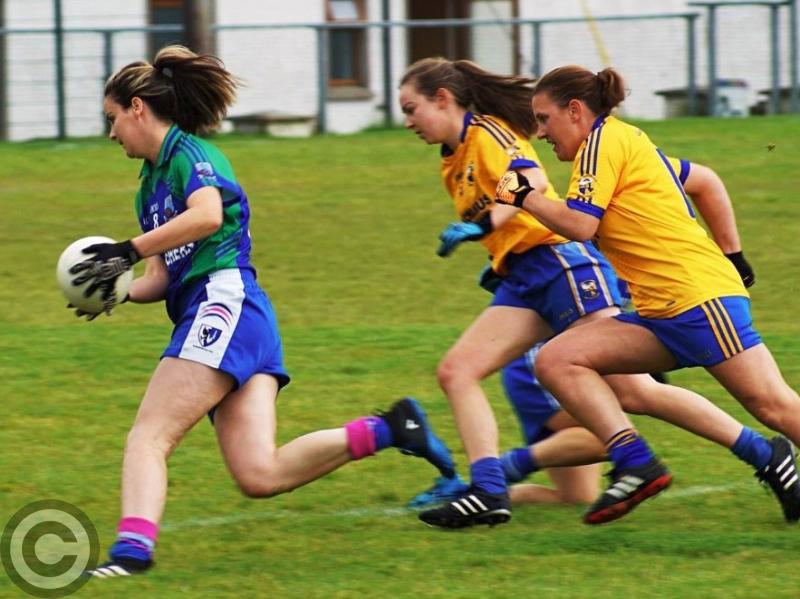 Michelle Heslin is pursued by the Glencar/Manor defence.

After a drama filled semi-final encounter, St. Joseph's emerged as narrow victors over a young Glencar/Manor side, most of whom are still eligible to play in the minor grade next year.

Claire Owens drew first blood in the contest when she fired over a St. Joseph's point just 15 seconds after the throw in for her side, who were aided by a strong breeze.

Almost immediately Glencar/Manor swept up field and hit back with a goal which Muireann Devaney drove to the St. Joseph's net after shaking the shackles of her markers.

St. Joseph's responded over the next five minutes with points from a Bronagh O'Rourke free and from play by Carmel McGovern to get on level terms. Glencar/Manor had a let off  shortly afterwards when a Carmel McGovern pile driver hit the North Leitrim side's crossbar.

A seventh minute Bronagh O'Rourke point put St. Joseph's back in the lead. However it was level two minutes later when Muireann Devaney fired over a point at the other end.

A 13th minute free enabled St. Joseph's to get back on level terms when Bronagh O'Rourke calmly pointed her effort. A well hit long range point four minutes later by Michelle Heslin from distance, put St. Joseph's back in the lead for a third time in the game.

Neither side managed to get another score in the contest for the next eight minutes in a period when their respective defences were very much on top before Glencar/Manor was reduced to 14 when Aoife Gilmartin was sin binned for a 24th minute foul.

A minute later Michelle Heslin tapped over a free which put the south Leitrim side into a 0-7 to 1-2 interval lead when the half-time whistle was sounded by referee Jimmy Stenson.

Neither side managed to register a score in the opening 17 minutes of the second half when Glencar/Manor, who were now aided by the strong breeze, attacked relentlessly and the St. Joseph's defence resisted stoutly.

A 44th minute challenge by Fionnuala Bohan on Muireann Devaney resulted in the St. Joseph's player becoming the game's third participant to go into the sin bin. The second half's opening score was put over by Roisin Rooney when she pointed to reduce St. Joseph's lead to the minimum.

Another Manor point from Muireann Devaney in the following minute had the game back in a stalemate situation once more. Neither side could break the deadlock for another six minutes until Bronagh O'Rourke fired over a 54th minute point from a 20 metres free that edged St. Joseph's back into a one score lead.

But the game returned to a stalemate scenario yet again some two minutes later when Muireann Devaney pointed a free but the north Leitrim side was reduced to 14 players with the 57th minute sin binning of Dearbhla Rooney.

A minute later Bronagh O'Rourke stepped up to put St. Joseph's back in the lead when she converted a close range free.

St. Joseph's held on to the lead for another six minutes until Muireann Devaney levelled matters once more with a 34th minute free but just prior to this score Glencar/Manor was reduced to 13 players when Cammie McPartland was sin binned.

After that a point from a 37th minute free, which was coolly put over by St. Joseph's Bronagh O'Rourke proved to be the match winner. However the drama continued as Glencar/Manor had two further chances to force a draw.

Orlaith Kelly came close to sending the game to a replay when her shot, which seemed to have point written all over it, came back off the top of the crossbar and was cleared.

And in the ninth minute of added time, Glencar/Manor won a free but Muireann Devaney put her effort wide from the placed ball and St. Joseph's escaped with a win by the skin of the teeth.

Main Man: Bronagh O'Rourke was St. Joseph's saviour in this contest. Her accuracy from placed balls, as well as her general attacking threat, proved to be a match winner for the Aughavas/Carrigallen side.

Talking Point: The fact that the young Glencar/Manor team, the majority of whose members are young enough to player minor football next year, almost made it through to the Club's first ever Senior championship final is a matter that will be watched with interest in the immediate future.

Turning Point: this nail-biting contest wasn't won until the seventh minute of added time when Bronagh O'Rourke split the posts with what was a pressure close in free kick.

Ref Watch: Jimmy Stenson had plenty of decisions to make in this clash which was close fought, physical and quite nail-biting. Over the course of the hour, there was no less than five sin binnings, about which neither St. Joseph's or Glencar/Manor can have much complaint.

Lowlight: The fact that the game had five sin binnings was somewhat disappointing. The ten-minute sin bin term that a player serves away from the action has a considerable negative impact for her team during that phase of the game.