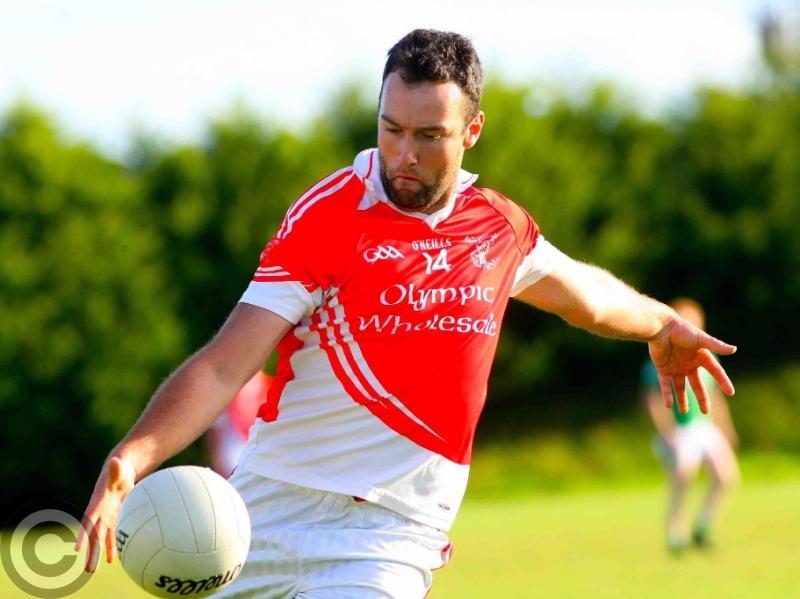 A fiercely competitive opening half in Ballinamore last Saturday suggested Fenagh St Caillin’s march to the Intermediate Championship may not be as clear cut as previously thought.

But ultimately Ballinaglera were unable to maintain that intensity and Fenagh went on to record a victory more comprehensive than the final score would suggest.

With a win and a draw to their credit after their opening two games, Ballinaglera knew a win over Fenagh would go along way towards securing their place in the last eight.

For Fenagh, they now occupy the favourites position and will be keenly aware that for every team they meet for the rest of the Championship they will seen as a significant scalp to take.

Ballinaglera came firing out of the blocks and the presence of Barry Maguire in midfield was pivotal for Ballinaglera as he proved to be a colossus during the opening half but Fenagh were quite content to defend in numbers.

That tactic proved to be particularly effective as Ballinaglera were dominant for much of the opening quarter but had only two points to show for their efforts, scored by Seamie McMorrow (free) and Enda Maguire (45).

Fenagh’s rearguard action was particularly impressive as they crowded Ballinaglera in numbers when they reached the 45 metre line. Martin Doonan, Aaron Scollan, Martin Doonan and Donal Wrynn made sure that even though attacking opportunities were scarce for Fenagh, they were able to weather the Ballinaglera without being far behind on the scoreboard.

Having gone 20 minutes without a score in a game that was becoming increasingly competitive, with a number of big hits being given and received on both sides, Fenagh hit back in style with two points in the space of a minute.

Ryan O’Rourke scored Fenagh’s first point after Alan Doonan was fouled and moments later Martin Doonan slotted the ball between the uprights after Ryan O’Rourke did very well to lay the ball off under considerable pressure from Brendan McGourty and James McDowell.

Ballinaglera may have been dominating in terms of possession but Fenagh seemed happy for that trend to continue, happy in the knowledge that there was a reluctance among the majority of the Ballinaglera players to shoot from distance.

With eight minutes of the half remaining Ballinaglera regained the lead when Barry Maguire’s dangerous delivery was fisted over the bar by Fergal Wynne.

Fenagh hit back immediately with a Donal Wrynn 45 that sailed over the bar but Ballinaglera deserved to have the lead on the basis of their first half showing and they replied with points from Wayne Reynolds and a Seamie McMorrow free after Fergal Wynne was fouled.

Fenagh completed the first half scoring with a Ryan O’Rourke point but it was Ballinaglera who deservedly enjoyed a 0-5 to 0-4 advantage at the interval.

With the game delicately poised it seemed as though those present in Ballinamore would be treated to a rip-roaring second half but that was not how the game transpired.

With little ball being delivered into the Ballinaglera full-forward line, Donal Wrynn was wasted to an extent at full-back and the Fenagh management made the decision to move him to midfield in order to nullify the threat of Barry Maguire.

That combined with a better variety of kickouts and a tiring Ballinaglera meant Fenagh dominated the second half and two late Glera goals gave the impression the game was closer than it was.

Two Ryan O’Rourke points, one from a free, within two minutes of the restart gave Fenagh the lead for the first time and it was a lead they never looked like relinquishing.

O’Rourke then turned provider as he released Nathan O’Rourke who was presented with a sight of goal but instead opted to take his point.

The wait for a goal didn’t last much longer as Fenagh struck decisively seven minutes into the second half. Jarlath Scollan showed plenty of awareness to pick out Ryan O’Rourke and the clinical full-forward dispatched his shot emphatically past Ballinaglera goalkeeper Conor O’Brien.

Fenagh now had a healthy five point lead but then dropped the intensity levels as they then went nine minutes without adding to their tally.

When the scoring resumed Jack Gilheaney was on hand to slot the ball over the bar after the ball fell kindly to him.

With 10 minutes remaining Ballinaglera scored what would prove to be their only point of the half with Tomas Cornyn scoring a fine point with a fine shot from a wide left position.

The intensity that was so evident in the opening half was now a distant memory and Fenagh took another step towards what was appearing to be a routine victory when Riordan O’Rourke and Jack Gilheaney pointed in quick succession.

In the final minute, Riordan O’Rourke increased the Fenagh lead to eight points but there was still time for a slightly nervous finish.

Patrick McGrail and Tomas Cornyn were both involved in a patient build-up and when Gerard Clarke delivered a dangerous ball towards Colm Maguire, the delivery evaded everybody and made its way straight through to the goal.

Barely a minute later the green flag was raised once more when Colm Maguire broke a booming delivering into the path of Fergal Wynne and he struck emphatically to the Fenagh goal.

The Fenagh lead was now reduced to two points but three minutes into injury time they secured the victory their performance deserved when Riordan O’Rourke pointed once more.

Main Man: Barry Maguire was the standout player for Ballinaglera during an impressive opening 30 minutes but they were unable to sustain those levels. Donal Wrynn was an assured presence throughout while Martin Doonan put in a huge amount of work but the contribution of the O'Rourke cousins, Riordan from the bench and Ryan from full-forward was key to ending Ballinaglera's challenge.

Talking Point: Will anyone get the better of Fenagh this year? That has been the talking point for a number of weeks in the Intermediate Championship and for 30 minutes it seemed as though Ballinaglera may do just that but their challenge faded after the break.

Turning Point: Ballinaglera's failure to turn their possession into scores in the opening half, as a result of some ferocious Fenagh tackling ultimately put victory out of their reach.

Ref Watch: There were plenty of hard tackles in what was an ultra-competitive opening half but Seamus Mulhern did a good job overall, issuing just one yellow card.

Highlight: The opening 30 minutes was a great advertisement for the Intermediate Championship with plenty of good scores and hard tackling.

Lowlight: Unfortunately Ballinaglera were unable to maintain the standards they set in the opening half and the competitive feel to the game faded as the second half developed.