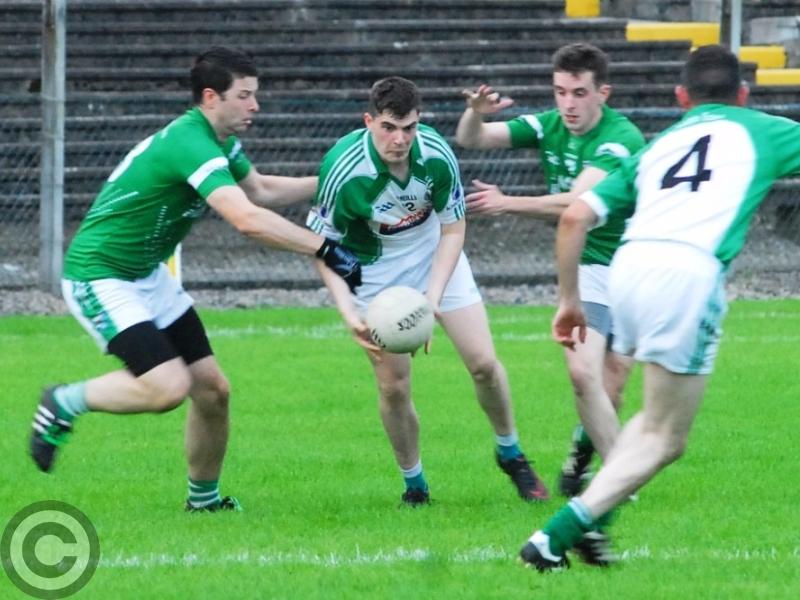 After four rounds of action, it comes down to the final round of the Fox Monumentals Intermediate Championship for Eslin and Kiltubrid who face uphill struggles to make the quarter-finals.

Kiltubrid did absolutely everything in their power to give themselves a fighting chance going into the final round as they held Carrigallen to a 2-10 to 1-13 draw, scoring four unanswered points to take home a share of the spoils and keep their dream alive.

A defeat would have meant that no matter what results happened in the final round, Kiltubrid could only got four points and Mohill’s second string team would have had the head to head result so they would go through.

Carrigallen took control of the game midway through the first half with a well executed Eoin Ward goal after good work from Gerald Percival. But Kiltubrid showed a lot of grit as they fought their way back into the game to trail by just a point at the halftime break.

The second half followed the pattern of the first with Percival (2) and Ciaran Flynn landing points before Ward converted his second penalty following good work from Daniel Lyons. That put Carrigallen four clear with 13 minutes to go but they were unable to hold out against a determined Kiltubrid.

Unfortunately for Kiltubrid, the decision of Glenfarne/Kiltyclogher to concede a walkover ensured an easy two points for Mohill.

Leitrim Gaels went top of Group 2 courtesy of an important 1-12 to 2-6 victory over the  unbeaten Cloone. In a tight and tense game, the Gaels scored an important victory that ensured they didn’t get dragged into the relegation mire in the final round.

In Group One, Drumkeerin more or less booked their place in the quarter-finals and left Eslin and Ballinaglera facing an anxious weekend. Ballinaglera lost to Fenagh St. Caillin’s (see report on opposite page) but still hold a one point advantage over Eslin.

Eslin, however, look in serious trouble after they suffered their heaviest defeat of the campaign when Drumkeerin demolished them with a 4-23 to 0-9 victory, an ominous sign as the north Leitrim men finally seem to be gaining some momentum as the knockout stages approach.

Eslin lost  Conor Beirne to a red card and such is his influence on his team, it is hard to imagine Eslin being able to overcome Aughavas without him next Saturday.

Aughavas, however, must have the title of the unluckiest team in the competition as they lost another nail-biter last weekend against Aughnasheelin, 0-14 to 1-9.

Apart from a heavy defeat at the hands of Fenagh where they had a player sent off early in the game, last year’s Junior Champions have lost three games by margins of one point, four points and  two points as they haven’t been very far off in all of their games.

That is now beyond them but judging from their displays so far, they will head into the relegation semi-finals quite confident of retaining their Intermediate status for 2018.

Aughnasheelin v Fenagh St. Caillin’s: A clash of the top two with nothing at stake but pride. But pride is a big thing in a derby. Fenagh look in better form  as Aughnasheelin are battling injuries and St. Caillin’s may lay down a marker.

Aughavas v Eslin: Eslin would normally get the nod here but if Conor Beirne is unavailable, you have to feel that an Aughavas team who have been somewhat unlucky so far should have that little bit of desire to secure a first win and set them up for a meeting with Glenfarne/Kiltyclogher in the relegation semi-finals.

Ballinaglera v Drumkeerin: This is a tough one as both teams technically need the points and it is a local derby. In reality, a point would do both teams but Drumkeerin finally seem to be hitting top form and they have the scoring power to see off a Ballinaglera team who are struggling desperately to convert chances into scores.

Cloone v Mohill: Another derby match here that, on paper, should be straightforward enough for Cloone’s first string team. But it is not that simple - Cloone may choose to rest anyone with injuries ahead of the quarter-finals while Mohill’s second string is impressive and strong. This will be a lot tighter than many expect, don’t rule out a draw but Cloone should edge it.

Carrigallen v Glenfarne/Kiltyclogher: Glenfarne/ Kilty have the sympathy of every Leitrim GAA fan as they struggle for numbers but unfortunately sympathy won’t cut any ice with a strong Carrigallen who should win easily.

Kiltubrid v Leitrim Gaels: Another derby and another tough one to call. Kiltubrid looked doomed after losing to Mohill but a battling display against Carrigallen suggests they still have a chance. Leitrim Gaels are safely through but they need to generate some momentum after a stop start campaign. How driven will they be because we know Kiltubrid will bring everything they can. On form, Leitrim Gaels, on desire and need, Kiltubrid may upset the odds.