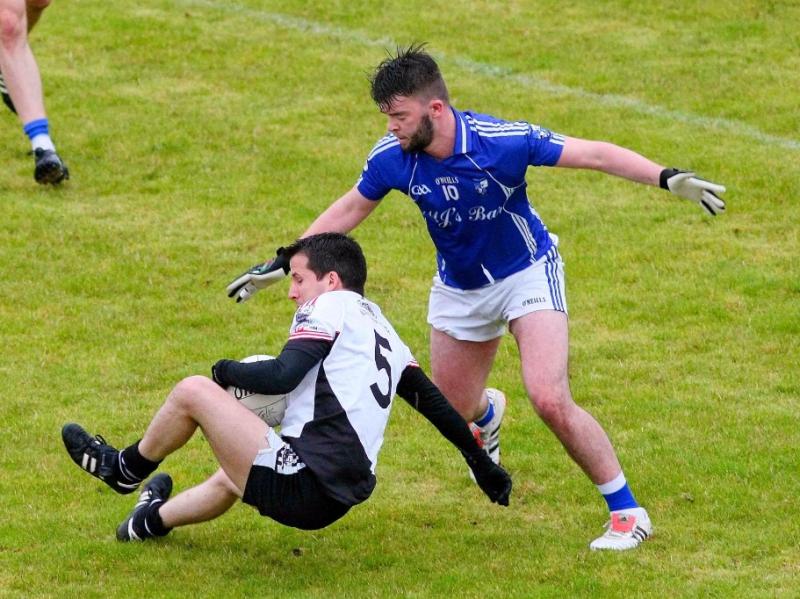 Action from Carrigallen's victory over Glenfarne/Kiltyclogher. Photo by James Molloy

It may have been of academic interest only but Aughnasheelin may have exposed a chink in the armour of favourites Fenagh St. Caillin's when they had three points to spare last Saturday evening.

Not only did Aughnasheelin's 3-9 to 2-9 give them a much more favourable draw of facing Mohill rather than Leitrim Gaels but they suggested that Fenagh can be got at.

The game seemed to be following the usual tale as Fenagh started slowly with Conor Cullen goaling almost straight from the throw-in. But Fenagh  hit back before halftime with two goals  to take the lead.

However, a fisted goal from Keith Sammon just after the break and a third goal for Niall Mulvanerty in the space of three minutes transformed the game and Aughnasheelin held on for the victory.

Cloone and Mohill fought out a draw that had huge ramifications for Kiltubrid. Mohill, four points down at halftime, produced a great second half and actually took the lead before Cloone secured the draw at 0-14 to 1-11.

Minus a suspended Conor Beirne, Eslin were always going to be vulnerable and so it proved as Aughavas, very unlucky in a lot of games, stormed to their first win on a 1-21 to 0-7, having led 0-11 to 0-4 at the break. They now face Glenfarne/Kiltyclogher in the relegation semi-finals and should record a win to preserve their status for 2018.

The final game of the group saw Carrigallen record their expected win over a struggling Glenfarne/Kiltyclogher, 6-16 to 0-1. Their reward is an intriguing meeting with Ballinaglera while the north Leitrim men face Eslin in the relegation series.