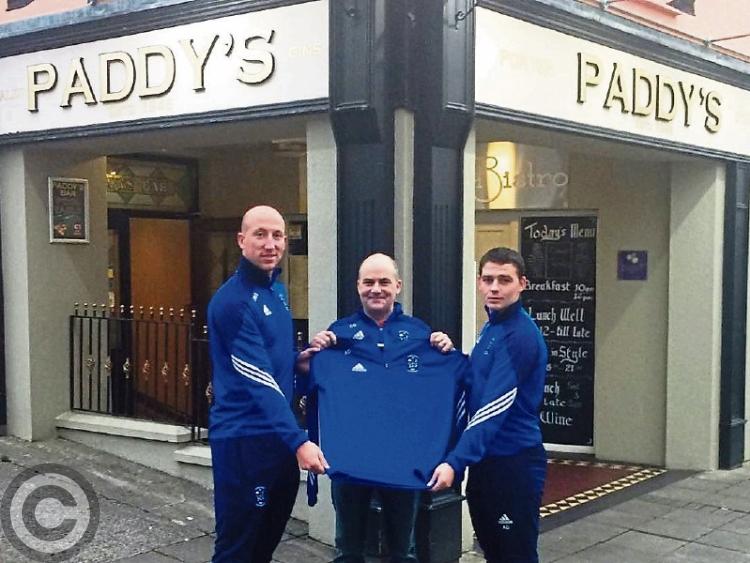 Colm Griffin, Paddy's Bar presents St. Mary's Club tops to Senior players James McGrail and Alan Doherty. Colm has a long association with our club and we are very grateful for all his support.

Champions Aughawillan sent out an ominous message to their challengers as they batted aside any talk of missing out on the quarter-finals with a 13 point destruction of Gortletteragh.

Glencar/Manorhamilton and St. Mary’s epitomised what was a strangely compelling and competitive Group 2, thought to be much weaker than the so-called Group of Death, by playing out a low-scoring draw in Ballinamore.

Completing the action on a jam packed Saturday evening, League champions Annaduff scorched to a comprehensive 0-12 to 2-4 victory over Allen Gaels despite conceding two goals in the first half, ending the Group stages

With six venues in action at the same time on Saturday, spectators didn’t have much chance to take in opposition teams and with the bad weather, crowds definitely appeared to be well down with the counter attraction of the Ireland v Georgia Soccer game also a complication.

Gortletteragh had gone into Saturday’s match in Cloone hoping that a defensive masterclass could hold out and frustrate the champions but two early goals ended their hopes against Aughawillan, the champions adding two goals in the final ten minutes to put even more gloss on the scoreline.

And while Mohill and Ballinamore Sean O’Heslin’s both defeated Aughawillan in the Group games and have set the pace as favourites, there will naturally be an element of looking over their shoulders as the champions seem to be picking up form and pace at just the right time.

Glencar/Manor & Mary’s were both already qualified for the quarter-finals with only top spot in the group at stake and both teams engaged in an arm wrestle in Ballinamore on Saturday, never more than two points separating the teams.

Last year’s County finalists seemed to start pulling away when they opened a two point gap in the second half but two Alan Doherty points levelled the scores before Ray Mulvey edged St. Mary’s in front.

Glencar/Manor hit back with two points to take the lead but with three minutes of added time, St. Mary’s forced the draw that set them up with a meeting with Melvin Gaels while Glencar/Manor face Aughawillan.

League champions Mohill had a slow start against Allen Gaels, already consigned to the relegation battle, as the Drumshanbo men scored two first half goals. But Mohill, who welcomed back Shane Quinn, Keith Beirne and Ciaran Kennedy, scored 11 points in the first half.

The second half saw Mohill restrict Allen Gaels to three points while adding ten themselves to run out very comfortable winners as they get ready for a meeting with Drumreilly in the quarter-finals.

Allen Gaels now face a difficult relegation semi-final against Annaduff but the Drumshanbo may be better prepared mentally than the Annaduff men who saw their quarter-final place disappear in smoke with Dromahair's surprise win. On the other side, Bornacoola and Gortletteragh battle in out in an exciting derby clash.