A victory that felt like a defeat as Kiltubrid hopes dashed 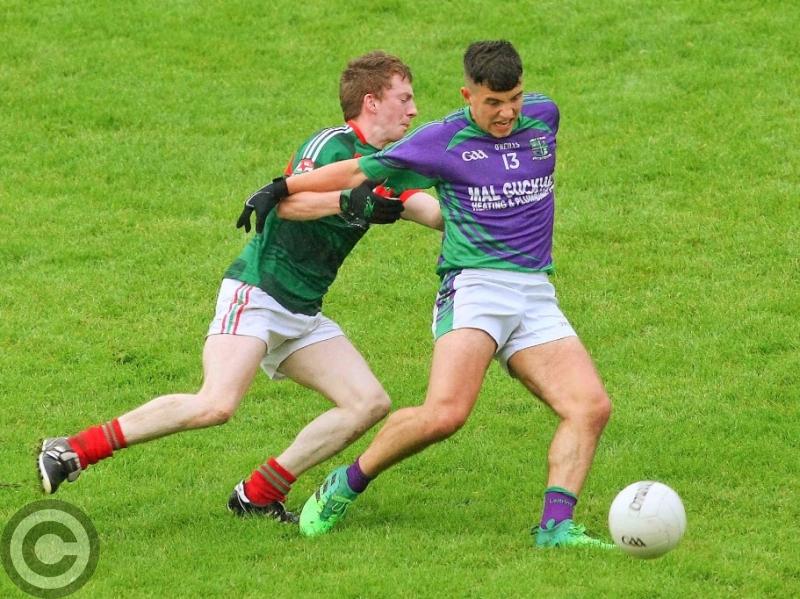 Narada Patrasco of Leitrim Gaels try to hold onto the ball. Photo by James Molloy

There can be few crueller things in sport than winning your absolutely must win game and then finding out that is just isn't enough.

That was the fate that befell Kiltubrid last Saturday as they turned in easily their most accomplished display of the Fox Monumentals Intermediate Championship to give themselves what they believed was the chance to reach the quarter-finals.

But in a twist to break Kiltubrid hearts, Mohill's second string recovered from a four point  deficit to force a draw against Cloone, a result that ended Kiltubrid's hopes by virtue of their head to head result against Mohill.

And just to rub salt into Kiltubrid's wounds, that loss to Mohill was by a single point, a theme that recurred as had they drawn with Mohill or had Cloone won by a point, Kiltubrid would be facing into the quarter-finals.

It was cruel on a Kiltubrid side who fought back from an early deficit against a highly rated Leitrim Gaels and were deserving and clear winners.

Leitrim Gaels, no more than Bornacoola in the first match, looked a class above early on and despite wides from a James Flynn 50, Colm Moreton and Aaron McLoughlin, they quickly led by three after good points from Enda Moreton, Aidan Flynn and Eunan Treacy free.

Those scores took 14 minutes to arrive as Kiltubrid looked completely lost but a Keelan McKeon free, waved wide  by the referee but correctly given by the umpire, gave Kiltubrid a welcome boost.

Emmet Mahon converted a free after a bad wide from Aidan Bohan and a great score from Keelan McKeon from the wing on 21 minutes incredibly had Kiltubrid level after Leitrim Gaels had dominated the first 20 minutes.

Aidan Flynn was unlucky with one effort that curled out but made amends when he finished off a good move but two wasted chances for the Gaels were followed when Conor Guckian fisted over a half goal chance, a long ball from James Flynn releasing Enda Moreton who supplied the final pass.

But Kiltubrid finished the half strongly with Emmet Mahon striking twice, on from a free, to leave the sides level at 0-5 apiece at the break.

Colm Moreton could, and probably should have been booked after a heavy challenge but was cautioned on 10 minutes with Mahon converting the free.

Conor Guckian shot a bad wide for the Gaels but Keelan McKeon shot a huge point after good work from Mahon to stretch the Kiltubrid lead to three points midway through the second half.

Enda Moreton had a sight of goal after a one-two with Guckian but lifted his shot high over the bar but it was now Kiltubrid who were dominating but missing chances. However, with five minutes to go, Mahon converted a crucial free to restore the three point gap.

Pat Moolick then surged forward to point after good work from Stephen McLoughlin and Mahon and the game was put to bed less than two minutes from time when a high ball to Mahon was worked to Michael Earley who finished expertly to seal victory for Kiltubrid.

The game was as good as finished and all that remained was a lovely point from sub Christopher McKeon to seal a bittersweet victory for Kiltubrid.

Main Man: A lot of big performances from Kiltubrid with Shane Foley, Pat Moolick, Eoin Dolan, Stephen McLoughlin and Keelan McKeon all impressing but Emmet Mahon was the leader with a superb performance. For a stunned Leitrim Gaels, James Flynn battled ferociously while Enda Moreton looked dangerous but it was a strangely lacklustre display from the Gaels.

Talking Point: There were fears that the new expanded Group stages would lead to a lot of dead games at the end - this was certainly not the case in this game and this group and, to be fair, it was the same over the four groups in the Senior and Intermediate championship.

Turning Point: Two Kiltubrid frees and a massive Keelan McKeon point in a three minute spell after 17 minutes punctured the dominance Leitrim Gaels had early on in this game and gave Kiltubrid the self-belief to go on and win this game.

Ref Watch: Michael McGirl refereed a game in difficult conditions with common sense, although he might have admonished Colm Moreton a little harsher for two incidents in quick succession.

Highlight: Keelan McKeon fired over a couple of massive bombs for Kiltubrid at a time when Leitrim Gaels were still leading.

Lowlight: Leitrim Gaels will wonder what happened to them after the first 15 minutes when they looked as if they were in a different class but they faded terribly once Kiltubrid found their feet.