Drumreilly test Mohill to the limit in Cloone 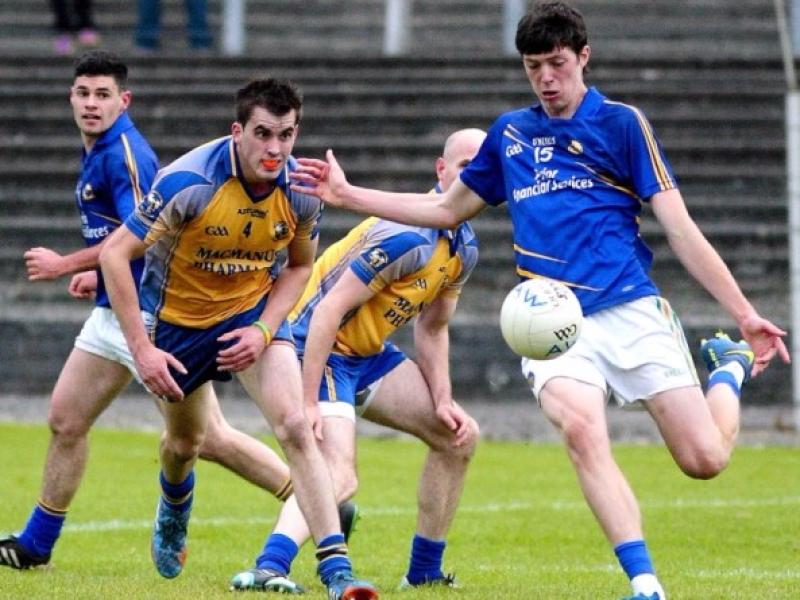 Aughawillan and Glencar/Manorhamilton must meet again

County Champions Aughawillan must do battle once more with Glencar/Manorhamilton after they were dramatically reined in during injury time at the end of an exciting and action packed Connacht Gold Senior Championship Quarter-Final.

Ballinamore Sean O'Heslin's cruised into the Semi-Finals with a 15 point win over St. Patrick's Dromahair while Mohill had a somewhat flattering nine point win over an inspired and frankly inspirational Drumreilly.

In the Fox Monumentals Intermediate Championship, Carrigallen had to battle hard to see off Ballinaglera who trailed by eight points at the break while Drumkeerin showed immense resolve as they battled from four points down at halftime to secure a one point win over Cloone.

But it was the 1-8 to 0-11 draw in Pairc Sean Mac Diarmada that will fans around the county wondering who will emerge as Glencar/Manorhamilton reeled off the last four points, including three in added time to force a draw with the County Champions.

Aughawillan led 1-4 to 0-4 at halftime and and looked to be in control as they stretched that lead to six points early in the second half. Unfortunately for the champions, they failed to kill off the north Leitrim men who responded by slowly reeling in Aughawillan.

Three injury time frees in what some observers say was five minutes of added time, some say six, saw Glencar/Manorhamilton rescue a draw and which left referee Eamonn O'Grady suffer the wrath of Aughawillan fans as he left the field with water being thrown at the match official as he left the field.

Elsewhere Ballinamore Sean O'Heslin's seemed to underline their Championship credentials with a 1-20 to 1-5 victory over St. Patrick's Dromahair, the goal coming five minutes before halftime from Wayne McKeon as the new favourites led 1-14 to 0-2 at the break.

Dromahair did pull back a goal give minutes into the second half but Ballinamore were never in any danger and were the first team to put their name in the semi-final hat.

They will be joined by Mohill but there will be a lot of inquests among the League Champions as Drumreilly threatened an upset for long periods. They trailed by just two points at the the three-quarter mark, having hit the woodkwork twice, once in both halves.

It was an epic display from Drumreilly who had lost Olly Maguire to injury during the week while John McKeon was obviously nowhere near full fitness. But, in fairness, Mohill started without their entire full-back line but they just couldn't seem to get away from Drumreilly who were in with a great chance of an upset.

In the end, it was Mohill's strength in depth that told the tale as despite losing two players to black cards, their overall fitness shone through on an incredibly heavy pitch, Ronan Kennedy dispatching the goal with 13 minutes to go that finally killed Drumreilly's challenge, 1-17 to 0-11.

In the Fox Monumentals Intermediate Quarter-Finals, Cloone held a four point halftime lead, 0-8 to 0-4, against Drumkeerin and looked well set for the semi-finals. But Drumkeerin dug deep and with Cloone losing two players to injury, they fought back and a late, late winner sent the north Leitrim men into the semi-finals.

Carrigallen will also join them there after a Jekyll & Hyde display as Eoin Ward dismantled Ballinaglera in the first half, scoring two goals as they led 2-6 to 0-4 at the break. A third goal from Ward 12 seconds into the second half seemed to kill off the game but Ballinaglera responded with a great Enda Maguire strike just over a minute later.

Ballinaglera transformed themselves in the second half but were left ruing two missed goal chances and a saved Seamus McMorrow penalty as Carrigallen held on for a 3-10 to 1-10 victory.

In the Senior Relegation semi-final, Gortletteragh preserved their Senior status for another year with a 1-12 to 1-9 win over Bornacoola in Carrigallen. Sean McKeon, from the penalty spot, and Jack Heslin traded goals in the first half as Gortletteragh led 1-7 to 1-4 at the halftime break.

Bornacoola closed that gap and levelled the scores with ten minutes to go at 1-8 apiece but Gortletteragh finished the strongest.

The refixed Melvin Gaels v St. Mary's Kiltoghert game will be played in Mohill on Sunday at 12 noon.

Keep an eye out on www.leitrimobserver.ie for more updates and news.