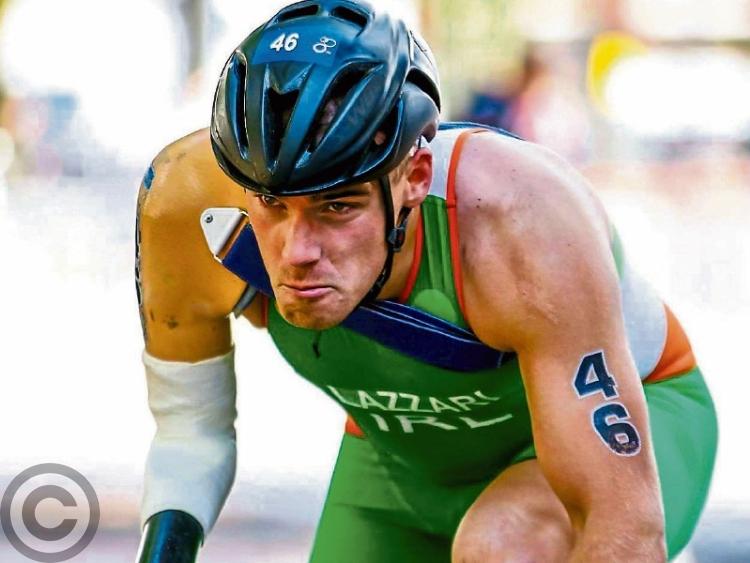 A great action shot of Lough Key Tri Club’s Tojo Lazzari at the Rotterdam Triathlon Grand Final in The Netherlands on Friday last.

Lough Key Tri Club’s Tojo Lazzari was the best of the Irish on day one of the Rotterdam Triathlon Grand Final in The Netherlands on Friday last as he claimed a superb bronze medal in the open paratriathlon PTS4 Final.

Lazzari, a Lecturer & Instructor in Outdoor Pursuits at Lough Allen Adventure, posted the quickest run split of the day and the second quickest bike split to climb onto the podium at the culmination of the triathlon season.

He recently won the Irish National PTS4 Championships in Loughrea and moves on the ITU World Cup Event in Sarasota, Florida in early October.

Lough Key members also attended a number of other events over the weekend with Mark Butler posting an impressive 5 hour 10 minutes half Ironman time at The Lost Sheep event in the mountains and tough terrain around Kenmare, Co Kerry on Saturday.

A recurrence of an old hamstring injury curtailed him on the run leg but he still managed to pull out a great time on the notoriously tough course in cold challenging conditions.

Closer to home, there was a large contingent from the club competing at the annual Glencar Lough Swim event in North Leitrim.

The event attracted some of the top open water swimmers from all over the North West region and nearly 150 competitors competed over 1km sprint and 2km endurance distances on the day.

Open Water swimming in the area looks set to get a massive boost over the next year with the Triathlon Club in talks with Leitrim County Council to jointly host a unique swimming event in the area next summer and will attract hundreds of competitors to the area.

Full details will of the event are expected to be announced shortly.