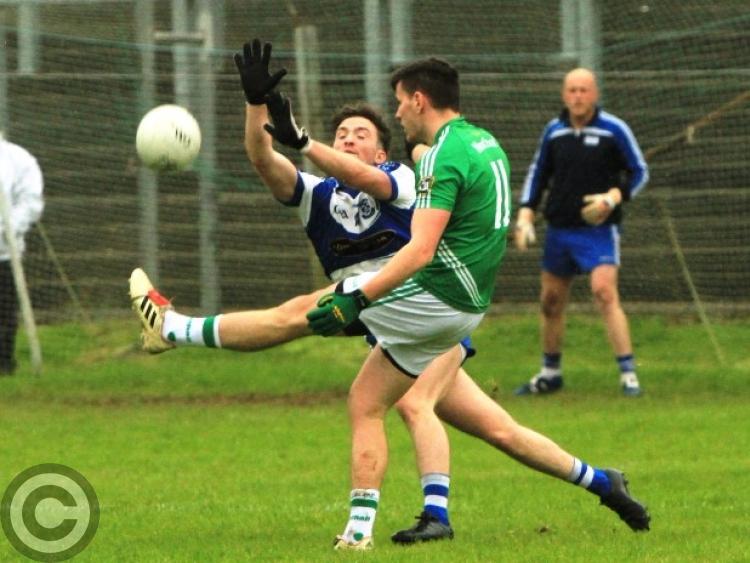 For long regarded as a soft touch, Mohill showed their considerable mental strength as they just about avoided an ambush from an inspired St. Mary's Kiltoghert last Saturday.

Mohill were heavy favourites going into the game but St. Mary's produced their best display of the year in falling just short of a draw that they deserved but which looked highly unlikely at halftime.

Mohill led by five points at that stage, a Keith Beirne giving them some breathing space as they struggled to pull away from a committed and impressive Carrick side.

But when the pressure was on in the second half, Mohill stood tall, their know-how seeing them work crucial scoring opportunities, never better illustrated than by Ronan Gordon's match winning score for Mohill.

It was that composure that just edged Mohill past the Carrick men who tested the 2016 League winners to the limit, their hard running and clever attacking play seeing them cause Mohill no amount of problems.

Mohill had the composure in front of goal that St. Mary's lacked and that ultimately was the difference between two sides who were  evenly matched for long periods.

Keith Beirne hit   two wides in the first two minutes while St. Mary’s had a slight sniff of a goal when a Mohill defender lost the ball but Padraig Tighe cleared before Daire Farrell could get his shot in.

Mohill made them pay with two great points from Ronan Kennedy and Domhnaill Flynn but St. Mary’s opened their account with an excellent fifth minute David Tiernan point.

Mohill hit back instantly, Shane Quinn with an excellent point from midfield but  St. Mary’s replied equally quickly with a Ray Mulvey point after good work from Nicholas McWeeney. Shane Quinn nabbed his second on eight minutes, his shot skimming the crossbar.

Alan Doherty converted a great free from the corner on 11 minutes before  Beirne opened his account with a fine point while he was denied a certain goal by a wonderful Conor Glancy save after he was put clean through, Michael McWeeney grabbing the loose ball to clear.

Alan Doherty converted a free to narrow the gap  but Beirne showed persistence to twist and turn his way to fire over a fine point on 19 minutes. But back came St. Mary’s again, Gary O’Daly scoring a lovely point on 21 minutes.

Both teams missed chances before Keith Beirne converted a fifty that went over off the hands of Daniel Lowe.

The missed chances continued but the decisive score came just over three minutes before halftime. A long free bounced  high in the St. Mary’s area as defenders crucially hesitated and Keith Beirne spectacularly half-volleyed the ball to the net.

It was a killer blow for St. Mary’s as Mohill led 1-7 to 0-5 at the halftime break but the Carrick men would have the wind at their back in the second half and Daire Farrell burst through the middle to score after just 20 seconds.

Mohill hit back with an excellent Ronan Kennedy point but Mohill suffered a blow when Darragh Gordon was black carded for a deliberate pull-down and the quick free yielded a massive long range Nicholas McWeeney point.

Seconds later, Brian O’Donnell, now operating at centre-forward for a far more fluid Mary's attack, fired over and suddenly the gap was down to three points after just three minutes of the second half.

Mohill had chances but hit three wides while Conor Glancy made another spectacular save to deny Caillin Canning who broke clean through and only had Glancy to beat.

A lovely Ray Mulvey score reduced the gap to two point on 13 minutes but Mohill restored the gap when Beirne’s pass across goal found Daniel Beck, Ronan Kennedy  manoeuvring back into space as the ball was in the air and he fired over to restore the three point gap.

The game took a dramatic twist with less than 10 minutes to go when Alan Doherty floated a dangerous ball into the square, James McGrail jumping with the keeper as the ball evaded everyone and flew straight into the net.

Mohill looked in trouble but their response was impressive, Domhnaill Flynn drawing a foul and Beirne converting.

With the tension building, St. Mary’s saw Doherty fire wide but Mohill super-sub, Ronan Gordon, barely on the field when he fired over but not without fantastic work from Alan McLoughlin who robbed a poor line-ball from the Carrick men, a couple of quick passes leading to Gordon’s point.

Carrick ensured it would go down to the wire when Doherty converted a lovely free from the corner as time elapsed but with four minutes of added time, there was time for an equaliser.  But the chance never arrived as Ronan Gallagher ended the game with a black card after a challenge on Robbie Lowe.

Main Man: Caillin Canning was superb for Mohill but was almost matched by St. Mary's Micheal McWeeney. Others to stand out include Shane Quinn, Nicholas McWeeney, Danny Beck, Ray Mulvey, Ronan Kennedy and Keith Beirne who had his best display of the campaign.

Talking Point: Mohill's ability to win tight games is now legendary but the vexed question of added time at the end of games arose once more. The four minutes announced were played and some 30 seconds extra but there  were lengthy stoppages within that time and there should have been more time played.

Ref Watch: Overall a good job for Mickey McGirl but he should have added more time at the end and was a little lenient with Ronan Gallagher's high arm late on.

Highlight: St. Mary's refusal to bend the knee in the second half  stood out as did Ronan Gordon's match winning point off the bench, an incredible score worthy of winning any game.

Lowlight: After the open, expansive play of the first half, the second half didn't live up to the first with a lot of poor wides from both teams, perhaps the poor conditions affecting the action.