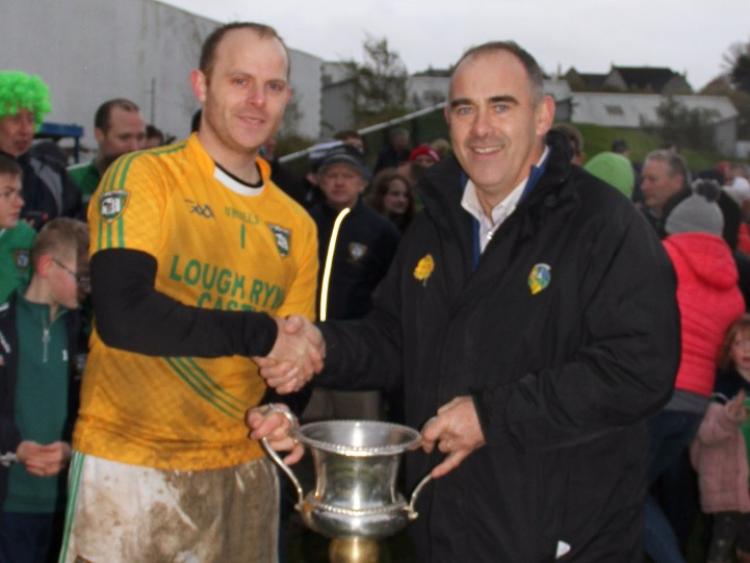 Thanks to a late Shane McGowan point, Mohill secured their third Leitrim senior league title in a row after being forced to dig deep for a hard fought, narrowest of margins win over Melvin Gaels in Carrick-on-Shannon's Páirc Naomh Mhuire on Saturday afternoon when the storm weather conditions in this low scoring battle made playing conditions almost impossible.

The Mohill men dominated the exchanges in the opening twenty-six minutes of the action but only could get two points on the board as Melvin Gaels, who defended like tigers and thwarted the South Leitrim side's best attacking efforts.

Somewhat against the run of play late in the first half a Melvin Gales surge turned the tables on Mohill and as a result the North Leitrim men went in deservedly leading by two points at the break.
From the restart and aided by the swirling wind, Mohill outgunned the Gaels by 0 -4 to 0-1 in the second half to claim victory by the skin of their teeth at the end.

Over the course of an encounter that had very little free flowing football, one black and eleven yellow cards were issued.

The exchanges were somewhat physical in the opening minutes of the action and perhaps the poor weather, as well as the slippery underfoot conditions, were a contributory factors in the circumstances of the game on the day.

The Mohill men, who up to this point had attacked the Gaels' posts almost relentlessly, drew first blood when Keith Beirne tapped over an eighth minute free.

Two minutes later Beirne was fouled as he bore down on the North Leitrim side's posts and he duly punished the transgression by putting over his second free on the trot.

A 17th minute hand trip by Melvin Gaels corner back, Leo Ryan on a Mohill player resulted in Ryan receiving a black card and he was replaced by sub Padraig Sheridan, who performed solidly for the rest of the action.

Melvin Gaels opened their account some ten minutes later when Killian McGloin, after being put through by a foot pass from a quick thinking Darragh Rooney, soled through a gap in the centre of the Mohill defence and fired over.

Two minutes later Melvin Gaels took the lead when Peter McGowan got on the end of a ball sent into the Mohill goalmouth and finished it to the net. After Mohill had dominated the first twenty-six minutes of play it was Melvin Gaels, after a strong finish to the half, led by 1-1 to 0-2 at the break.
During the opening action of the second half Mohill's Alan McLoughlin received a 32nd minute yellow card and some three minutes later, Shane Quinn reduced Melvin Gaels' lead to the minimum when he shot a point from play.

But Melvin Gaels went back into a two point lead again when after a good build up Killian McGloin drove through the heart of the Mohill defence, to fire over a 41st minute point, which proved to be his side's last score.

Four minutes later Mohill closed the gap to a one point margin once more when Keith Beirne converted a free. After a 45th minute tussle between Melvin Gaels' John Langan and Mohill sub Shane McGowan both players were issued with yellow cards.

The Mohill men grabbed the lead some four minutes later, and for the first time in twenty-seven minutes, when Shane McGowan hit over what proved to be the winning point from close range after being put through by Keith Beirne.

Also during the closing phase of the action Melvin Gaels' Darragh Rooney saw his 62nd and 65th minutes frees tail off narrowly wide. If one of them had gone over it would have sent the game to extra time.

Main Man
Caillin Canning was superb in defence for Mohill and his many timely interceptions cut out several promising Melvin Gaels' promising moves. Canning also initiated many of the Mohill surges that resulted in nearly all of their six scores.

Talking Point
It was a surprise that Melvin Gaels made it such a close contest and put Mohill to the pin of their collars before they eventually got over what proved to be a most stern challenge by the North Leitrim men.

Turning Point
Shane McGowan's coolly slotted 55th minute point, as well as being the winner for Mohill, proved to be a bridge too far for Melvin Gaels. Keith Beirne unselfishly passed for to the better placed McGowan to do so.

Ref Watch
Mick McGirl had a busy afternoon in this tense battle that was not made any easier for him by the weather conditions. He was impartial in his decisions, even though neither Melvin Gaels or Mohill, quite saw it that way at times.

Highlight
Killian McGloin's Melvin Gaels' points before half-time and early in the second were the best two scores of the game. McGloin drove impressively at speed through slight gaps in the Mohill defence and executed clinically on each occasion.

Lowlight
The fact that Storm Brian coincided with the playing of Leitrim's second most important club game of the year was disappointing for both teams, as well as their followers. It would not have been possible to play the game on the day were it not for the excellent state that Páirc Naomh Mhuire was in.