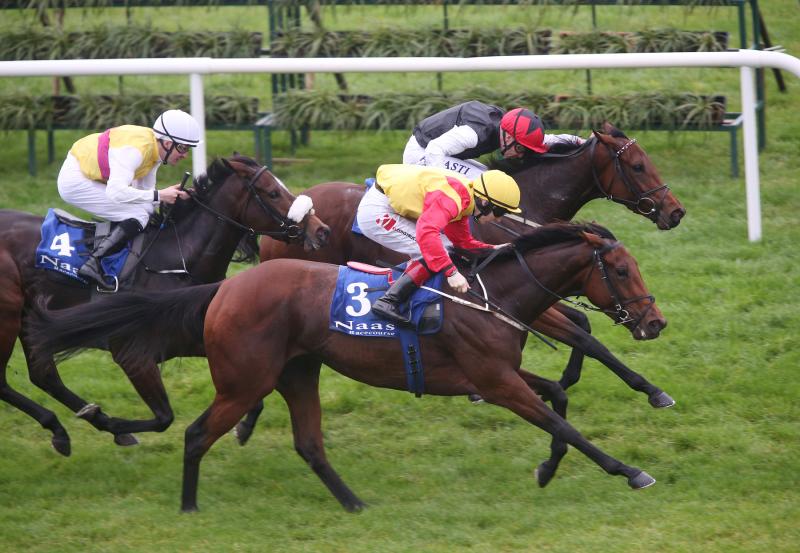 Elegant Pose ridden by Colin Keane, near camera, getting up on the line to win The Clodovil Irish EBF Garnet Stakes with Making Light ridden by Pat Smullen, 2nd. Naas Sun 15 October 2017

The 2017 Flat season draws to a close at Naas Racecourse on Sunday, November 5, and the day will be marked by presentations to the champion owner, trainer, jockey and apprentice.

Colin Keane, the champion apprentice in 2014, leads nine-time champion jockey Pat Smullen by five winners (92-87) after racing at Navan on Wednesday (yesterday) as he seeks a first senior title. It is still all to play for with five meetings remaining:

Keane (23), who is stable jockey to Ger Lyons, has enjoyed a number of notable wins this season including the Group 3 Irish Stallion Farms EBF Brownstown Stakes on the Roger Varian-trained Realtra at Fairyhouse and the Group 3 Coolmore Stud Home Of Champions Stakes on Lyons’ Psychedelic Funk at Tipperary. Pat Smullen was first crowned champion jockey in 2000 and is chasing a tenth title. The highlight of his season came at the Curragh on Longines Irish Champions Weekend when he took the Group 2 Moyglare "Jewels" Blandford Stakes on Shamreen, trained by Dermot Weld.

The race to be crowned champion apprentice is an even tighter affair with County Donegal rider Oisin Orr leading Killian Leonard and the side-lined Ana O’Brien by just two winners. Orr has 20 winners to his name, matching his combined tally of the past two seasons. Leonard rode his 18th winner of the season at Navan on Wednesday to join O’Brien on the same mark. She has not ridden since a fall at Killarney in July. With 16 winners this season, Gary Halpin lies fourth in the apprentice championship.

Mrs John Magnier’s involvement with horses such as Tattersalls Irish 1,000 Guineas winner Winter and Group 2 Derrinstown Stud Flying Five Stakes winner Caravaggio will see her retain the title of champion owner for the 15th time since 2000.

Aidan O'Brien is once again the Champion Flat Trainer, topping off a fantastic season at home and broad for Ballydoyle. On the world stage, O’Brien equalled Bobby Frankel’s world record of 25 Group/Grade 1 wins earlier this month at Ascot and could better that at Doncaster this weekend. At home, he has dominated once again, landing four of the five Classics at the Curragh, the Tattersalls Irish 2,000 Guineas with Churchill, the Tattersalls Irish 1,000 Guineas with Winter, the Dubai Duty Free Irish Derby with Capri and the Comer Group International Irish St Leger with Order Of St George. O’Brien also won Group 1 races in Ireland this season with the two-year-olds Sioux Nation and Happily in the Keeneland Phoenix Stakes and the Moyglare Stud Stakes respectively and won the Coolmore Fastnet Rock Matron Stakes with Hydrangea.

The Flat Championship presentations will take place at Naas Racecourse on Sunday November 5.