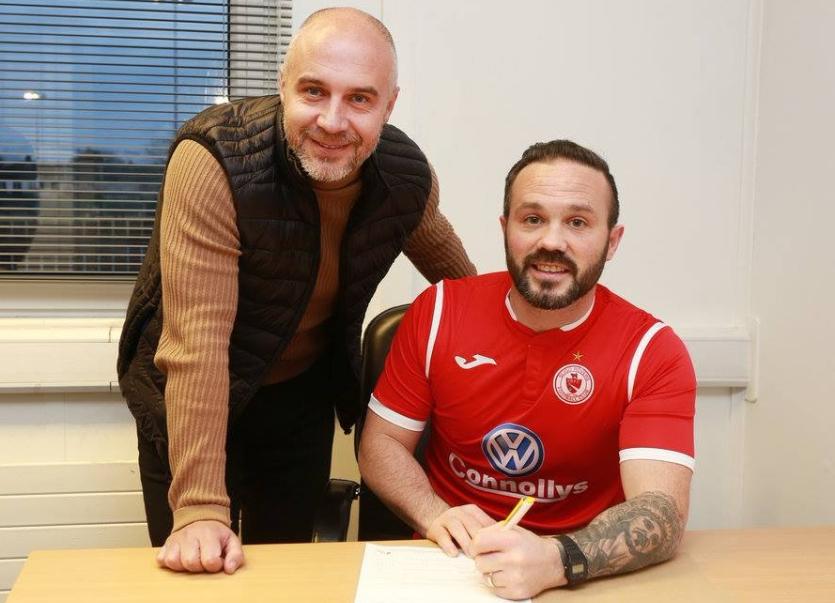 Sligo Rovers have confirmed that Raffaele Cretaro has signed a new contract with the club and has been awarded a testimonial in his 17th season at The Showgrounds. The Tubbercurry striker is the 15th addition to the Bit Or' Red squad for 2018.

Cretaro first joined the club back in 2000 making his debut in September of that year.

He has been a constant presence at the club apart from single seasons with Galway United (2006) and Bohemians (2010), making it his 19th season overall in the League of Ireland.

He has the second most appearances in Rovers history as well the second top scorer. Only Tony Fagan and Johnny Armstrong are ahead of the Tubbercurry man.

The 36-year-old said: “I’m thrilled to get it done. It was actually finalised pretty quickly and it was just about getting the time to put pen to paper.

“Gerard has been top class to me. He has managed me brilliantly and there’s a great relationship in how we work and when to step it up and when to scale it back.

“I’m looking forward to pre-season already. Obviously I have to be realistic in that I’m not going to play every game. But I’m not here to make up numbers. I’m there to compete to start every week and I’ll be ready again.

“We’ve made some fantastic signings so far. I’ve played alongside David Cawley before as we know and he’s a great addition. Caolan McAleer was an excellent signing because he was sought after. I know more are coming and we’ve kept the backbone of the squad. Gerard has shown he knows what he wants and I think that’s what we’re seeing.

“There were a lot of clubs involved in a relegation battle last year. We started badly and I think it knocked us with the three down in mind. We brought in some quality players like Rhys McCabe and Seamus Sharkey and it made the difference.

“We should have been safer sooner with the results we were getting.

“Those additions like Greg Moorhouse and Vinny Faherty as well made the squad stronger and it was that bit harder to get in the team. I hope to see that again and it’ll be to up me to get to the level where I should be in the team and I’ll try to do that again.”

Manager Gerard Lyttle said: “He still has football in those legs, you watch him in training and he trains still like a teenager. It's not just his personality and who he is and what he is.

“Sometimes you have to pull the reins back in on him. His age and his body does not allow as much as he has been doing.

“The way I worked with Raff this year is he tells me if he needs a rest, if he is okay and it will be same next season.

“He feels his body is fine to go another season. I respect him an awful lot as a person and professional footballer. I'm delighted he will be with us again.

“He's a great ambassador for the club, for the community in Sligo and I think it's important that a player like Raff who has been a big part of the club are here. If he thinks he is fit enough and available to play then he will be with us.”

The Rovers boss is also keen for Cretaro to be a big influence to young players in the Rovers squad.

“I see a role for Raff as well, which I've spoken to him about, talking and teaching and coaching young players like Greg Moorhouse and the new boys that have come in to teach them what it's about and what they need to be doing when they come here.

“His experience is vital, especially with the younger players coming in. His knowledge of the game, the league and this club is very important. I think it's a no-brainer.

“He has that connection with the supporters. His ability to do that will be crucial for us moving forward in the season ahead.”

It was also revealed Cretaro will have a testimonial this year as the club acknowledge his contribution to Sligo Rovers – which is largely unmatched.

“It’s a fantastic gesture by the club. They didn’t have to do it but they felt it was the right thing to do. There’s also been the coaching with the Under-19s. It will mean a lot to me but it’s not something I want to think about too much yet.

“We’ll have to form a committee for organising and getting a team but first things first, let’s concentrate on our season and we’ll focus on that more later in 2018.”

Rarely heard of these days when a player signs on for his 17th season with the same club. Respect is due to @RaffCretaro on his tenure with @sligorovers

@RaffCretaro has been some servant to @sligorovers . Only 7 appearances away from overtaking Tony Stenson in 2nd and 200+ from Tony Fagan who must’ve played 3 games every weekend.

As a cork city supporter, I take my hat off to you sir, such an ambassador for the game in Ireland. Long may you play!