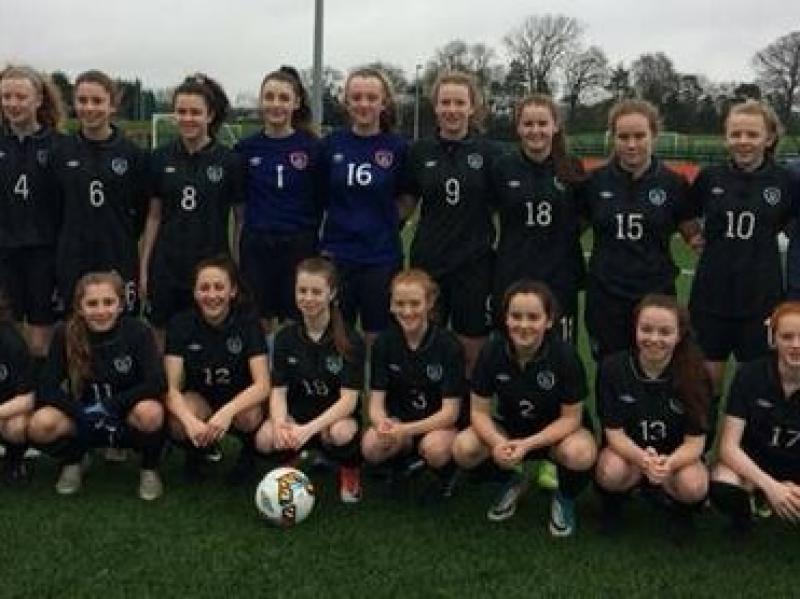 Manorhamilton's Muireann Devaney was part of an extended Ireland U15 training squad that were part of a two day training camp that was held last weekend at FAI HQ, Abbotstown.

Team manager Richard Berkeley had 21 players kitted out over the two day training camp. He also kept a watchful eye on a number of key players as injuries have ruled out some Bob Docherty Cup contenders.

The girls turned on the style on Sunday afternoon when they did battle with an impressive MGL U16 select, a welcome test for the students.

The MGL reacted via Shauna Carroll who slotted home confidently to make it 2-1.  Anna Fahey then hit the woodwork before Carndonagh Community School pupil Erin McLaughlin made it 3-1 with a superb effort. Again the MGL responded through Emily Whelan making it 3-2.

Muireann Devaney wrapped up proceedings for the Republic of Ireland to finish 4-2.

The U15s will enjoy a friendly fixture against a club side on Saturday, February 3 in Castlebar as their training schedule is nearing completion.

A provisional squad will be named to take on Northern Ireland on Saturday, February 17 in an International friendly in the AUL Complex, Clonshaugh.

The annual John Read Cup will see the Republic travel to Stafford Town to take on England on Saturday, March 10 ahead of their International Tournament.

The Bob Docherty Cup will then take place from March 24 to 26 in Belfast were 18 players will line out for the Republic of Ireland.