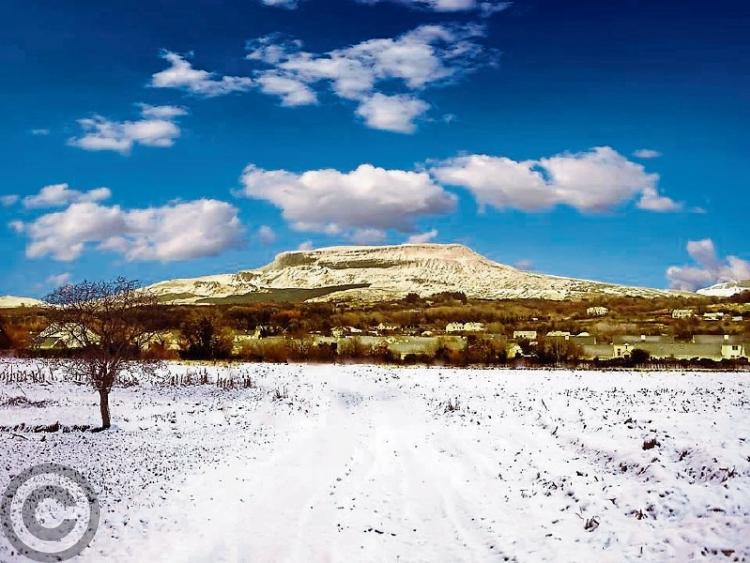 Despite its accompanying treacheries, the white innocence of snow brings out the child in us.

The enforced decampment en famille was also most welcome (although I appreciate the inconvenience it brought to many).

I felt I got to know my little daughter Eliza better over the past four days than I have over the past three months. Time moved as tantalisingly slow and as velvety smooth as the settling of a long-overdue pint of porter; something, I believe, a lot of people also caught up with over the elongated weekend, as Dublin’s local pubs experienced a return to their halcyon days. People walked to their local as the destination rather than a stop off en route to the bright lights of the city centre establishments. Patrons wallowed in the conviviality of the company and the warmth of the welcome.

They also had the perfect excuse to stay a little longer than planned. ‘Arra sure it was blowing a blizzard outside, we daren’t set foot outside the door!’

Chez Regan, we had time only for each other. Nowhere to be … cut off from the world … we resided in our own little snow globe. I loved every minute of it. Despite the weather I remained determined to expose Eliza to the elements and the landscape, particularly this white stuff that she may not witness again for some time.

We braved Dollymount Strand on Thursday before the 4pm weather warning to stay indoors. Snow had already encased the city. As I dusted off the car windows, a fur-lined walker (faux or real I could not tell) asked, in an exotic accent, whether I was heading to the city centre. It was the other direction, but I enquired how she intended getting there in the absence of buses or other public transport. ‘I vill valk,’ she declared. I took one look at her shoes and advised her to get in the car.

Magdalena hailed from Romania and has lived in Ireland for five years. She didn’t fancy the idea of a weekend of splendid isolation so her friend had extended an invitation to see out the snowstorm in her city centre apartment. ‘I did not expect them to cancel the buses,’ she explained, before going on to praise the country in general. ‘You can make a good life here. I could not live this life in Romania.’ She misses her mother and her brother, who she helps to support and visits when she gets time to spare from her work as a nurse and her on-going studies. A clearly bubbly individual, she went quiet for a moment. ‘I also miss my daughter, from my broken marriage. I don’t get to see her very much.’

As I reached the Liffey, Magdalena looked full of life once again, buoyed by the nearing of her destination and the promise of the company of a friend. ‘I prayed this morning for some help and God provided. I will pray for you and your baby,’ she said as I pulled in to let her out. You couldn’t ask for a better fare for a journey than that.

I’ve always praised God for ‘dappled things’ and I presume that’s why Gerard Manly Hopkins’ poem ‘Pied Beauty’ resonated so strongly with the teenage me. I too cheered ‘For skies of couple-colour as a brinded cow; For rose-moles all in stipple upon trout that swim; Fresh-firecoal chestnut-falls; finches’ wings; Landscape plotted and pieced—fold, fallow, and plough; And all trades, their gear and tackle and trim.’

I want to expose my daughter to nature’s tangible and intangible beauty and restorative wonder. I’ve always been drawn to such energies and was blessed to have Tullaghan, Kinlough, Tawley, Dartry, Glenade and the surrounding locales as my playground.

There’s an old stone step to the rear of our house that marks the threshold from the relative civilisation of our yard to the wilds of the open fields beyond. From there, I would watch the setting evening sun change the colour and complexion of the angular nose of Arroo Mountain that split the eyes it cast on Kinlough/Darty and Glenade. The name evoked Aboriginal connotations and the mountain became sacred to me. Yet unlike Uluru’s indigenous locals, this native yearned to climb his spiritual mound and explore the features I had gazed upon so long from afar.

The trek up the angular snout of Arroo from the Augharooskey orientation became a regular pilgrimage for Gareth Phelan and I, most often on weekends home from college in Dublin in the 1990s. The ritual involved a visit to Mary and Bernie whose small holding on the mountain’s edge marked the beginning of the trek proper. To this day I don’t know their surname …. they were and will always be Mary and Bernie Augharooskey to the people of the area. They were of my father’s era.

‘Be sure to stop by the source for a sup,’ Bernie would call from the vegetable garden in front of their house. Every time we passed he appeared to be there, and I used to imagine he had put down his own roots in his perfectly kept patch. Mary from the doorway would warn us to call in on the way down with news of the football and the big city.

One day I secured from my father a wee bottle of poitín to bring to Bernie. When we called in after our trip to the cairn at the top of the mountain, Mary, as usual, had a spread of tea and sweet cake waiting for us. ‘We took this drop from the source,’ I told Bernie as I offered him a Ballygowan bottle. Without neither hesitation nor a sniff of the contents, Bernie threw his neck back and swallowed a mouthful of the poitín.

A glint of devilment exploded behind his ancient eyes and we could see the ember burn on as he looked at us squarely. ‘That’s the best of good stuff,’ he said as he made to pass the bottle back.

‘That one’s for you Bernie,’ I said. A smile as fleeting yet beguiling as a windy baby’s passed over his lips before he slipped the bottle into the pocket of his jacket. He cast a glance over to Mary to confirm that the transaction had been executed with the discretion of a confession.

It’s been a while since I have viewed the world from the vantage point offered by Arroo Mountain, but I will return there (albeit on another side to that described above) on Easter Sunday for a walk hosted by the local Holy Soles Walking Group as part of the Leitrim Glens Walking Festival 2018. The gathering will mark the opening of the new Arroo Trail. The linear 8km return walk starts from the old Aghanlish National School and carpark, follows the old bog road, and, thanks to the kind permission of local landowners, ascends to 224 meters onto the hillside.

It is the fruition of work of the Leitrim Recreational Forum with the support of Leitrim Development Company and County Council. It is an example of what can happen when those with the resources to make things happen engage with the community with the wherewithal to bring it to life.

This meaningful partnership is a credit to all involved and is but one of numerous forum projects currently underway designed to showcase north-Leitrim’s natural potential, including, a Leitrim Glen’s Cycling Sportive in August, a feasibility study of Wild Atlantic Salmon Experience on the Leitrim coast, the development of the Sligo Leitrim Northern Counties Rail to Trail project, and the enhancement of Fowley Falls into an amenity of national standing.

The starting point of the Arroo Trail features a beautiful map-board identifying some of the many features one may enjoy on the ramble. It features images of a red grouse, a buzzard, a hen harrier, a chough, the peacock butterfly, and the common lizard. It notes that some of the best-preserved bones of Ireland’s last brown bears (dated 3,100 years old) were discovered in Poll na mBear (Bear Cave) in Glenade in 1997.

It recalls the tale of Glenade Lake’s Dobhar Chú and of Francisco De Cúellar’s eventual arrival at McClancy’s Castle in Dartry following the shipwrecking of his Spanish Armada fleet off the northwest coast. It identifies many significant facts about Arroo’s Mountain’s significance, but it doesn’t identify the location of the source. That you must find yourself. Bernie, who has since returned to the Great Source, would approve.