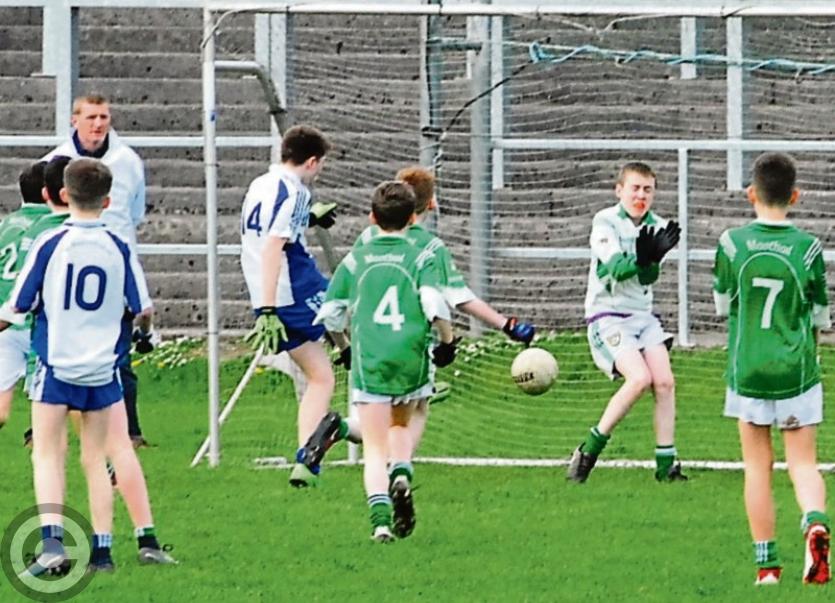 A nail-biter that could have gone either way but in the end, St. Mary's sheer will saw them past a dogged Mohill last Friday evening.

With both teams meeting in the U13 Reserve Final, the strength of both clubs was evident in an entertaining 15-a-side Final where St. Mary's resolve told its tale.

Mohill looked as if they were going to pull off a famous victory when they led by seven points with just 15 minutes left. But as their shooting boots deserted them, St. Mary's rolled up their sleeves and fought like tigers for every ball.

With Gerard Murtagh, Daniel Martin, Cian Casey and Dara Holmes sending ball after ball back into the Carrick forwards, Ben Guckian took centre stage as he scored 1-4 in the final 15 minutes to drive St. Mary's to the title.

St. Mary's had three points from Gerard Murtagh, Brian Keaney and Ben Guckian inside the first five minutes. But Mohill hit back when Carrick keeper Daire Shannon saved a shot from Colin McNamara but then took his eyes off a long delivery from Eoin Duignan as the ball went under his hands and into the net.

Keaney and Aaron McCrann swapped points as Ben Guckian put over a free to narrow the gap to two points as halftime approached. But there was more drama as Eoin Duignan produced a fantastic solo run, cutting through the Mary's defence to bury a low shot in the net, leaving his team 3-1 to 0-5 ahead.

Mohill were not rattled and replied with good points from Matthew Murphy and Colin McNamara before a poor St. Mary's kickout was pounced on and Aaron McCrann produced a great finish for a fourth goal.

Mohill seemed all but certain to win but the goal was their last score of the game and St. Mary's displayed real guts in their fightback. Ben Guckian drove over two points that were obviously goal attempts before he added a free on 17 minutes.

A brilliant move involved Reynolds and Brian Keaney ended with Guckian forcing the ball over the line, fouled as he scored to level the scores. And with St. Mary's tackling and working with renewed intensity, Mohill couldn't get out of their half.

Guckian put over a huge point, Keaney hit a free while Cian Reynolds had a shot saved by the keeper. Keaney had another goal chance but the ball was tipped over the bar by the outstanding Bohan as St. Mary's completed their epic comeback in great style.

Main Man: Lots of really excellent displays from both teams with Mohill's attackers Matthew Murphy, Colin McNamara, Eoin Duignan and Jack Rowley standing out while Michael Tiernan was outstanding in defence, as was keeper Luke Bohan.

Gerard Murtagh, Daniel Martin, Cian Reynolds, Alan Beirne, Jack Deegan, Aaron Glancy and subs Cian Casey and Dara Holmes all had big moments but no doubt that Ben Guckian was the most influential player on show.

Talking Point: You'd have to wonder how much better young players would perform if they didn't have an army of mentors shouting instructions at them left, right and centre and it was obvious from both teams that they produced their best when they played instinctive football and really expressed themselves.

Turning Point: Normally, it is a goal but two bad Mohill wides kept St. Mary's alive midway through the second half. Had Mohill got those scores and halted St. Mary's fightback, they would surely have held on. As it was, St. Mary's kept battling and got their reward.

Ref Watch: Fintan McBrien didn't have too much tough decisions to make as it was a game played in the right spirit by both teams.

Highlight: Mohill keeper Luke Bohan made a serious of wonderful saves while the team-work St. Mary's first goal stood out.

Lowlight: Not trying to be harsh on very young players who will get much better but some of the shooting from both sides was poor.