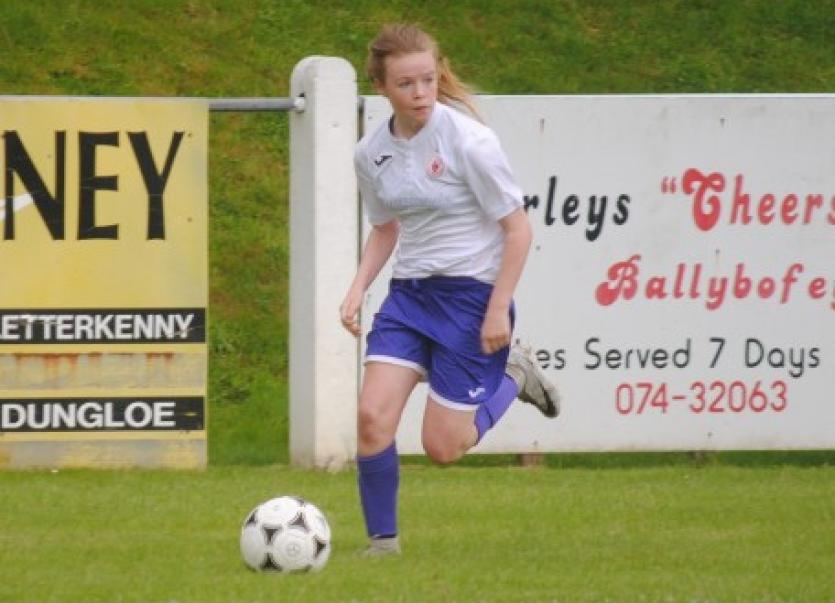 Leah McHugh in flying form on the wing for Sligo Rovers in their 4-1 win over the Donegal League.

A solid team performance from Sligo Rovers saw off the challenge of the Donegal League to secure the Bit O’ Red’s second victory in a week against the same opposition in the Continental Tyres Under 17 Women’s National League in Drumkeen, Donegal.

A 4-1 victory with a brace from Ava Keane, after two minutes and again just before full time, book ending strikes from Alva Munnelly and an own goal off a Donegal head.

Having needed a last minute goal to secure all three points in the first encounter, Rovers were keen to wrap it up earlier this time around and proceeded to open the scoring with their first attack. 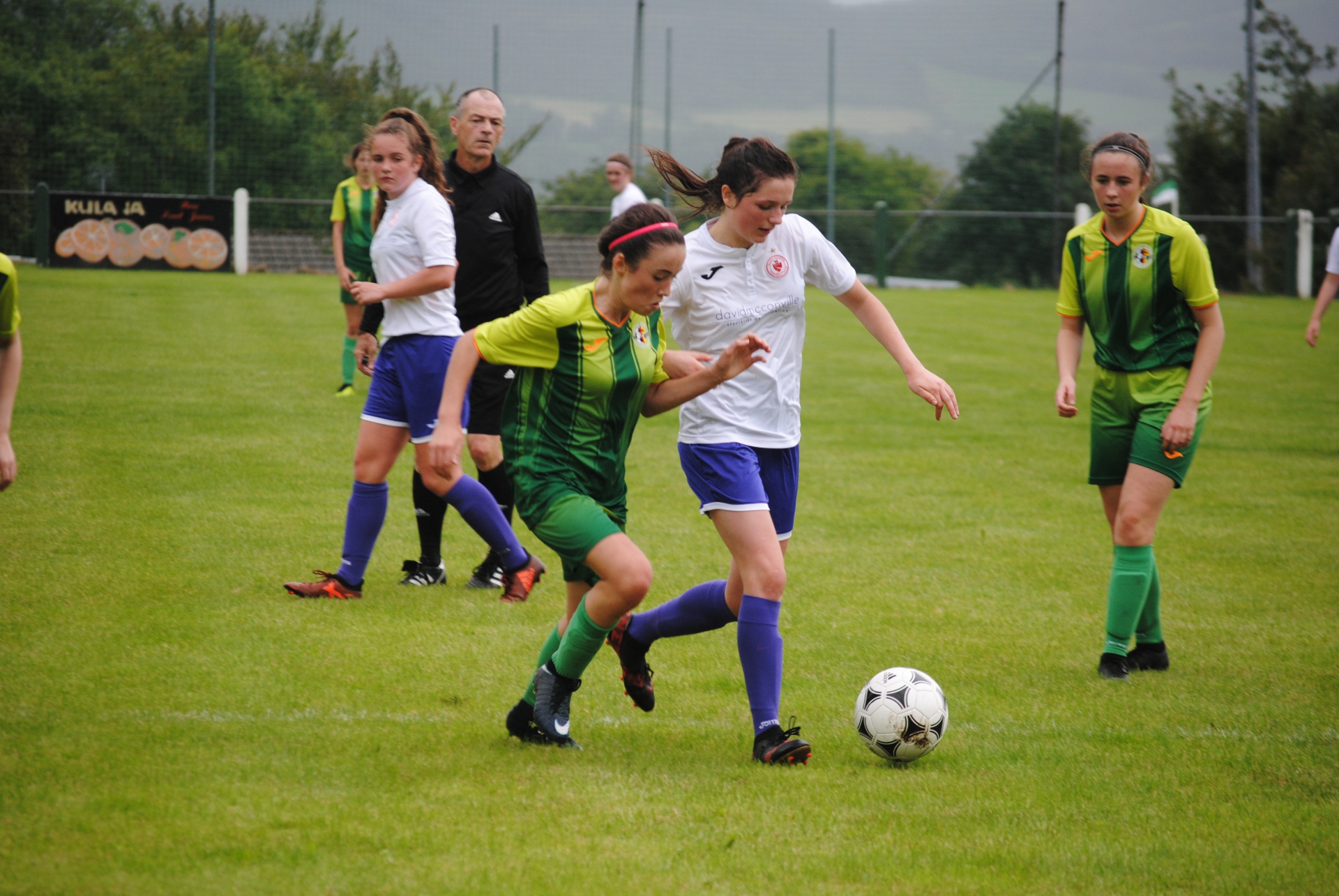 After a brief period of pressure from the home side, Kate O’Dowd picked up the ball in the centre of the park and her excellently weighted through ball found the feet of Keane. Her first strike was well stopped by Neve Scanlon, the Donegal goalkeeper, but the ball fell loose and the Mayo native reacted first and beat the defender to prod the ball home to give Sligo the lead.

Minutes later disaster struck, a collection of defensive errors after Donegal smashed the crossbar from distance but the rebound fell kindly to a Donegal forward, a good save by Lauren McLellan saw the ball roll to the feet of another Donegal player who rolled the ball home despite the best efforts of Aoife O’Neill.

Donegal posed a better challenge than the previous week’s encounter getting the ball down and creating some decent opportunities but the best changes did fall to the away side. Kate O’Dowd forced an excellent save from Scanlon and Aife Haran’s effort from the resulting corner just wouldn’t stay on target.

After taking a ball full in the face, Rovers lost wing back Kate Nugent to be replaced by Erin Taheny for her third appearance of the season.

Within moments Rovers had restored their lead. Some excellent work down the left hand side of the pitch saw the ball reach the feet of Alva Munnelly who lofted her shot from the edge of the box over Scanlon’s head and it bounced into the back of the net for her second goal in a week.

Efforts from O’Dowd and Haran would again bring the best out of Neve Scanlon who was equal to the task, before Rovers would double their advantage just before the break. A Kate O’Dowd corner was met by the head of a defender but it sliced backwards and into her own goal to leave the Bit O’Red 3-1 up at the interval.

The industrious Haran was replaced by Ciara Henry after 52 minutes with Alva Munnelly and Kate O’Dowd making way from Leah Duffy and Leah McHugh a few moments later. 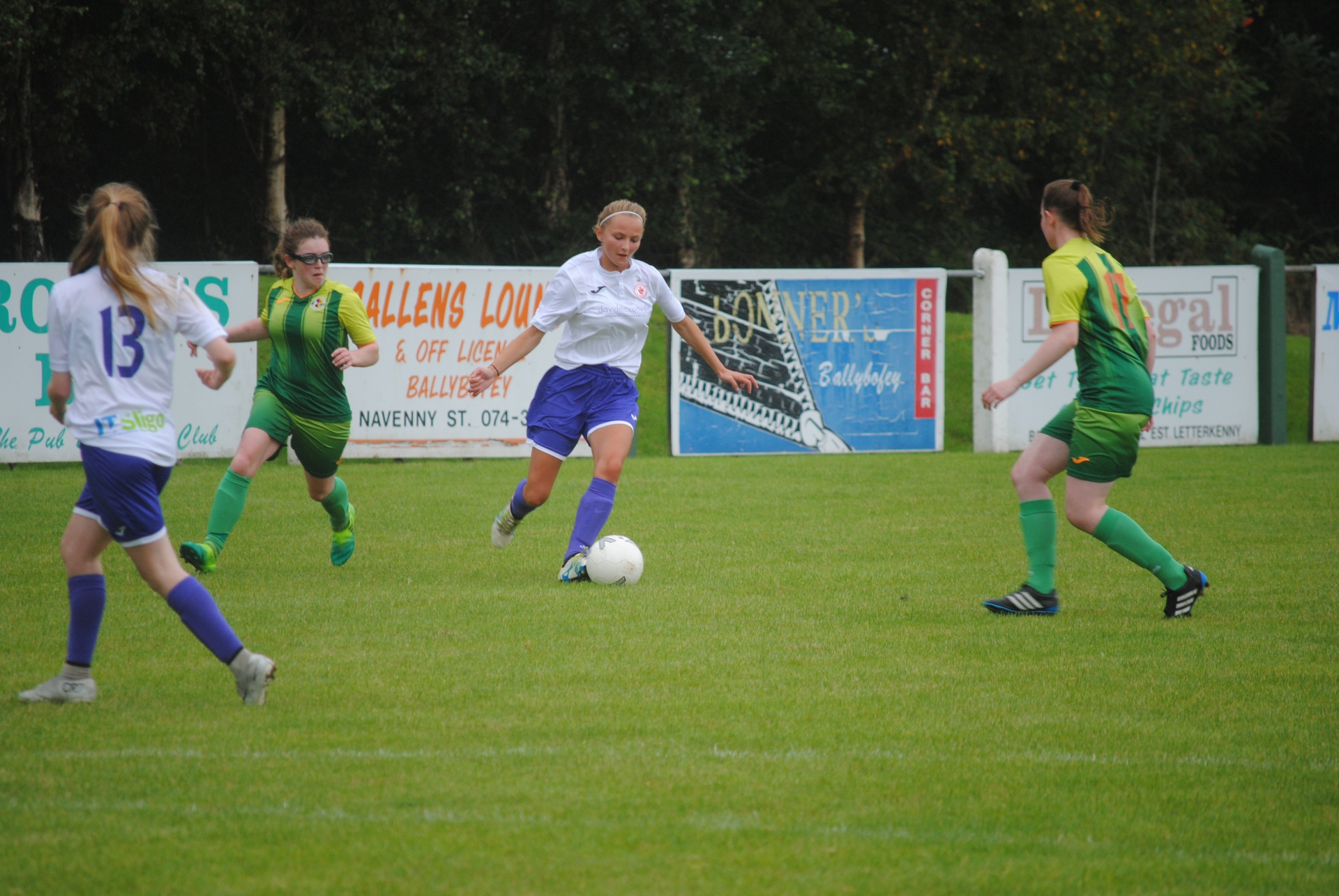 Donegal reverted to launching long balls which Rovers mopped up relatively easily. Sligo continued to build well from the back but didn’t create much in the way of chances apart from one surging run from captain Kelsey Munroe which saw Scanlon dive bravely at her feet to take care of matters.

Ava Keane would finish the game exactly as she started it by finding the net. Her looped headed effort from Leah McHugh’s cross finding its way over Scanlon and just under the crossbar to seal the game at the death.

On the display it was more than deserved for Rovers but possibly unfair on Scanlon, the Donegal goalkeeper, who was probably the best, and busiest, player on the pitch for the full 80 minutes. Best for Rovers in an excellent team performance, particularly in the second half, were Kate O’Dowd and Roisin Molloy.

An improved performance from Rovers who are really finding their feet at this level and with only five players from this squad overage for next season and the majority still eligible in 2020 the future is very bright for this young side.