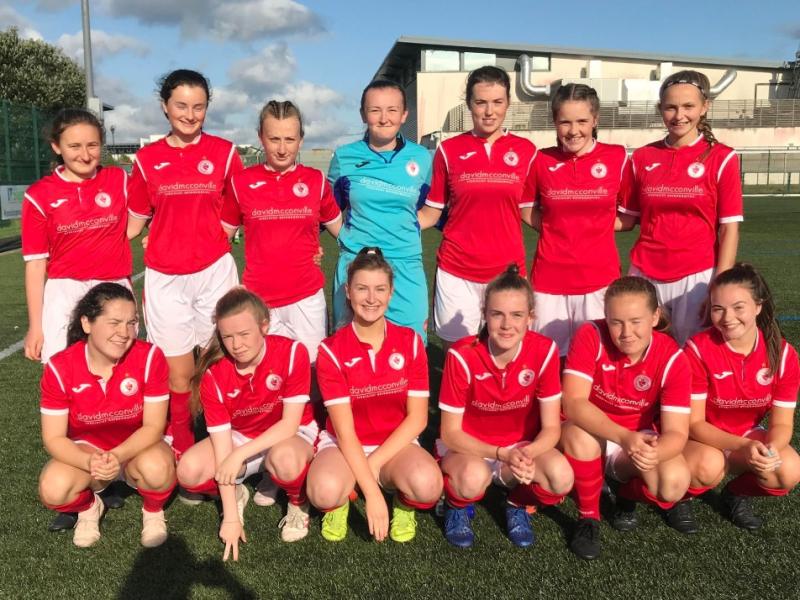 With the first phase of games completed in the Só Hotels Under 17 Women’s National League, it has been confirmed that Sligo Rovers will now be competing in the League section, having finished in the top half of Group 1.

The Bit O’Red now go into the League section with Shelbourne and Galway WFC who also finished in the top half of Group 1 and they will be joined by Limerick, Wexford Youths and Cork City.

Teams will play each other once during this series of games.

The Shield group, containing teams who finished in the bottom half of the two groups within the league, will be made up of Athlone Town, Peamount United, Donegal League, Bohemian, Greystones United and DLR Waves.

The Rovers girls, sponsored by David McConville Orthodontics, are enjoying a fantastic season so far.
The team is based at IT Sligo, where they train and play their home games.

Fixtures for phase two of the Só Hotels U17 Women’s National League have been announced and Rovers will face Shelbourne in the first game this Saturday at the AUL.

They are home to Cork City on Saturday August 3.

Meanwhile, the Bit O'Red are through to the semi-finals of the Só Hotels Under 17 WNL Cup after they beat Donegal League 5-0 at IT Sligo on Wednesday night.

Muireann Devaney scored a brace, while Alva Munnelly, Aife Haran and Ava Keane were also on the scoresheet.

Sligo Rovers manager Darragh Healy was understanably delighted with the progress made by his team saying: "It's great to qualify for the top section and this shows how well the girls have done over the last ten games to do so. Our first 5 or 6 games we done very well and had a lot of points on the board going into the last few games."

"You want to be competing against the better teams and testing yourself each week we play and this will definitely be the case against all the teams we will encounter from now on. We qualified at the expense of some well established teams like Peamount so this shows how well it has gone".

"Hopefully we can qualify for the semi final stages and be competing from that side of things. We know we can compete with any team in the country on our day so we are optimistic particularly with a cup semi final to come also".

"We're delighted with how all the girls have done and especially this time of year with holidays and one or two injuries there has been loads of rotation but every player has contributed and done well, and we will need every player to contribute going forward to the end of the season also".

"A cup run would be great. We've beaten Bohemians and Donegal to date and have Galway WFC in the semi final. We are one game away from a cup final so it would be brilliant to get to the final and have a day out so hopefully with a bit of luck we'll get there".